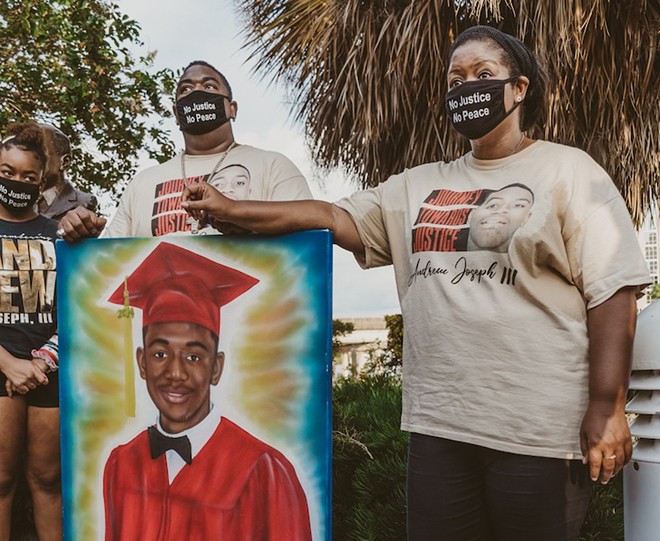 Andrew Joseph’s parents hold a sign of their son, who died after being ejected from the Florida State Fair by HCSO in 2014.

During the third day of the federal trial for the wrongful death of Andrew Joseph III, a former master sergeant from the Hillsborough County Sheriff’s Office argued that state laws about child detention should be interpreted by deputies how they see fit.

Former Master Sergeant Todd Anthony retired from HCSO last year, but in February of 2014 he oversaw the team working the Florida State Fair when Andrew Joseph III was taken into custody and ejected for allegedly running through the fair.

Corporal Mark Clark, who worked under Anthony, detained Joseph and claimed he committed disorderly conduct, even though there was no evidence of the teenager committing a crime. The child was not arrested that night, but was ejected under the order of Clark and left by the side of Orient Road, about 100 yards south of I-4.

Joseph, just 14-years-old at the time, died that night after being struck by an SUV on the interstate while trying to find his way home.

Today, former Sergeant Anthony took the stand. Under questioning from the Joseph family legal team, he said that before the 2014 fair he had reviewed all local, state and federal laws that might apply to the event.

But under questioning from Chris Anulewicz, an attorney representing the Joseph family, the former officer said he didn’t agree with state laws about child detention.

“‘Taken into custody’ means the status of a child immediately when temporary physical control over the child is attained by a person authorized by law, pending the child’s release, detention, placement, or other disposition as authorized by law,” the statute reads.

Essentially, this means that a child is “taken into custody” as soon as a law enforcement officer detains them and makes it clear that they are not free to leave.

After Anulewicz read this law out loud to the court, Anthony said to the courtroom, “I have a different definition of what taken into custody means.”

He explained that he believes the state law should be interpreted by officers on a case-by-case basis. He argued that because Joseph was not arrested by HCSO—only detained and then ejected—that Joseph was not necessarily taken into custody under the state law. But as Anulewicz pointed out, the law clearly contradicts Anthony’s statement.

Joseph was not released to any family member or responsible adult, but was driven to  Orient Road by an HCSO detention van and left on the side of the road to fend for himself. Anthony also disagreed with this statute, once again saying that each individual officer should be able to make those types of decisions on the spot.

“Law enforcement officers have to make difficult decisions based on circumstances in front of them,” he said.

“Does everyone at HCSO get to have their own interpretation of the statutes?” Anulewicz asked.

Anthony said that each deputy is tasked with making their own decisions.

The teenager was not delivered to any “department” as the statute mentions, and there is no evidence presented yet of sheriffs trying to call Joseph’s parents.

In response to the reading of the law, Anthony said, “I do not concur with the context that you are extracting from that statute.”

When asked by Anulewicz if he believed an HCSO officer would have to witness a violation of the law to detain a child, Anthony said, “No sir, I do not.”

About Joseph’s detention that night in 2014, Anthony said, “I don’t believe there was an unlawful detention.”

As for what happened to Joseph afterwards, when he died after being struck by an SUV on I-4, Anthony said that HCSO had no authority over Joseph after they ejected him from the fair.

Yesterday, Mark Clark, the officer who detained Joseph and called for his ejection, said he “can’t recall” detaining Andrew. But he did remember arresting a 15-year-old for smoking tobacco that night, which should warrant a citation, not an arrest.

The defense team for HCSO also tried to change its story last minute yesterday, saying that Clark might have not been the original detaining officer. But the team was scolded by Judge Mary Scriven, who told the defense, “You can’t manufacture facts.”

On the stand, Deputy Henry Echenique, who worked under Clark, remembered that Clark had in fact detained Joseph and told him to eject the child from the fair.