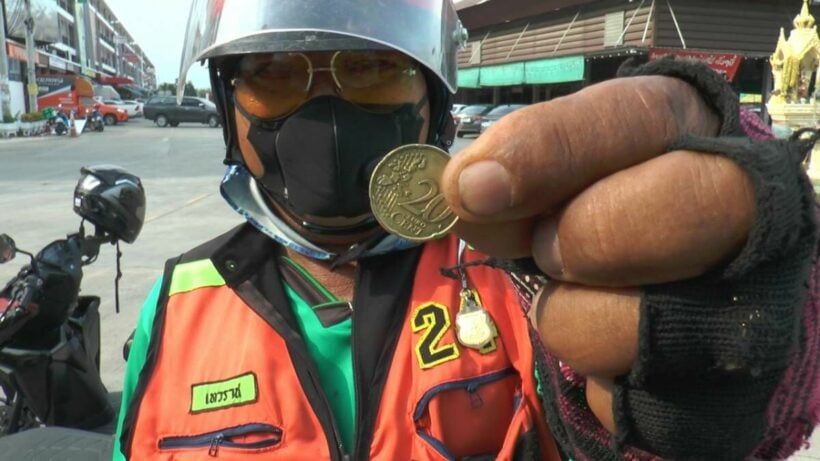 A motorcycle taxi rider in Samut Prakarn province near Bangkok warned other riders to be aware of a tight-fisted foreigner who duped him, handing over a 20 cent euro coin, about 7 baht, for a 450 baht fare.

The 63 year old motorcycle taxi rider, Subin Waitook, yesterday revealed to the media that a foreign passenger agreed with him to pay 300 baht for a 15 kilometre route from Bangkok Bank Phraeksa branch in Phraeksa district to Central Bangna shopping mall in Bang Na district of Samut Prakarn province.

After arriving at the shopping mall, the foreigner asked him to wait at the front as he wanted to continue his trip to Bearing BTS station, which was about another 10 kilometres away from the mall.

Subin said they agreed to a revised 450 baht fare for the whole trip.

The foreigner handed him a foreign coin when they arrived at the last destination and gave him a thumbs up.

Subin said he thought it was a 20 euro coin and was very happy to receive it for a 35 kilometre trip.

Subin checked the exchange rate and discovered that 20 euros is about 700 baht.

The taxi rider wasn’t happy for too long when one of his friends noticed the coin wasn’t 20 euros but only 20 cents, about 7 baht.

Subin told the media that he would like to warn all of Bangkok’s taxi riders to be careful with foreign passengers and only accept Thai currency. He suggested that riders should refuse passengers who did not have any Thai baht.

Subin added that he would take the coin to the bank and see if it could be exchanged for Thai baht. If not, he would keep it as a reminder of the day he was scammed by a foreigner.