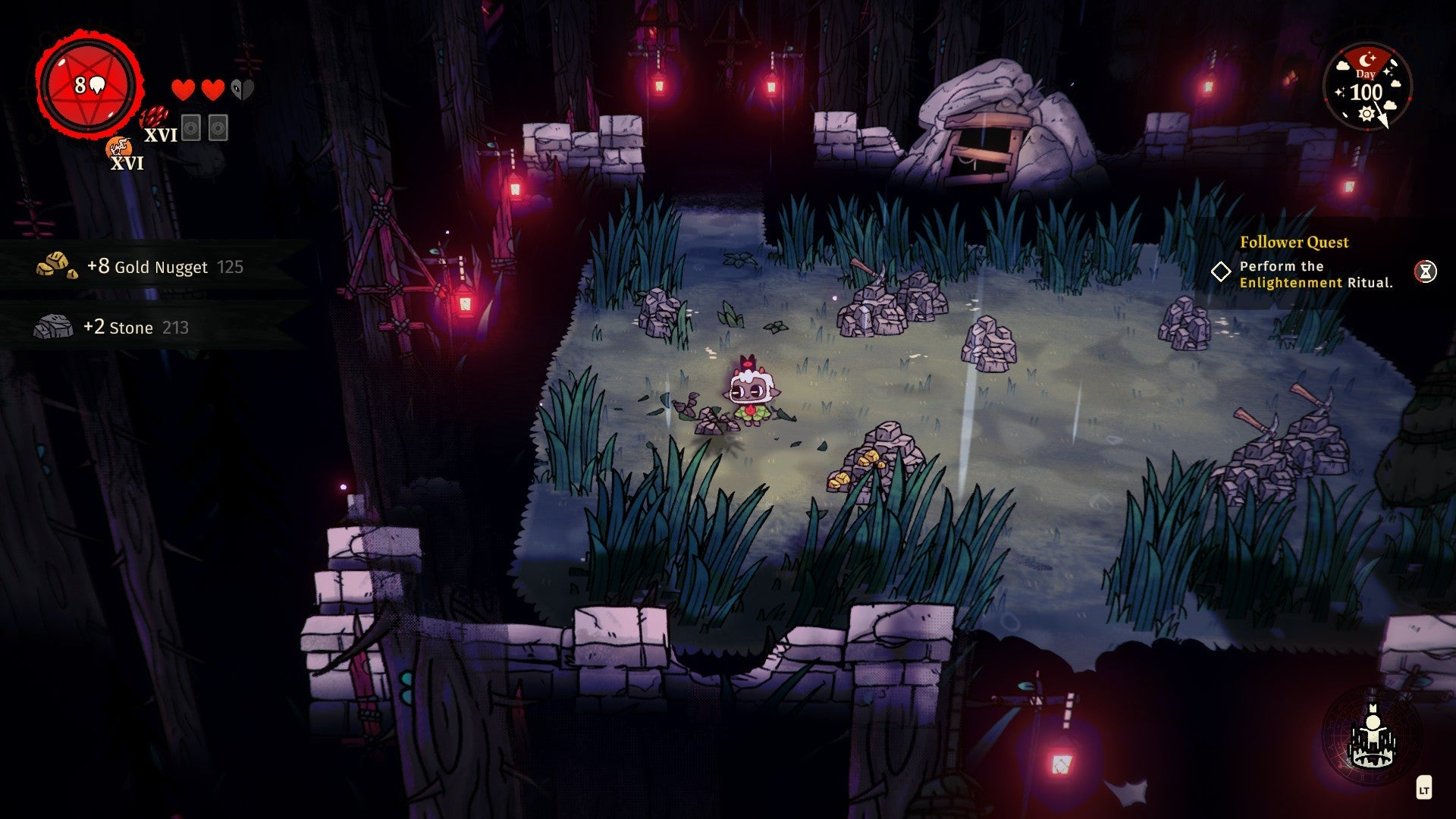 This page contains information on how to get more food and materials in Cult of the Lamb, including where to find more lumber, stone, bones, and food of all types.

Cult of the Lamb is secretly a very resource heavy game. When you’re not spending resources to keep your cultists happy or building out your camp, you’ll be crusading in search of materials to bring back to your Followers. Early on, things can be pretty scarce, but if you know where to look, you can get things moving pretty quickly.

See the list below to jump to a section for the type of resource you are looking for:

How to Get More Stone

When you first arrive at the site of your new Cult, there will be many overgrown ruins, and you can instruct your Followers to mine them (or attack them yourself) to get a decent amount of stone. However, unlike trees, rocks don’t grow back, so you’ll soon have to find other means to get more:

Once your have upgraded your Divine Inspiration to a high enough tier, certain buildings will require Stone Blocks instead of regular Stone. This cannot be mined, but instead you will have to build a Refinery and order your Followers to consecrate stone into blocks for you to build.

How to Get More Lumber

Like stone, there will be a few opportunities to get lumber at the site of your new cult, as you can instruct Followers to chop down mighty trees or do it yourself. Once you clear cut your camp, you’ll have a few more options:

Once your have upgraded your Divine Inspiration to a high enough tier, certain buildings will require Wooden Planks instead of regular Lumber. This cannot be cut, but instead you will have to build a Refinery and order your Followers to consecrate lumber into planks for you to build.

How to Get More Bones

Bones are the magic that make the rituals go ‘round. Unfortunately, it will take a great deal of bones to enact a ritual, which means you may be hard pressed to find them early on in your cult days.

How to Get More Grass

Grass is a necessary material for many things in Cult of The Lamb. For instance, grass is used for crafting a variety of decorations, it’s used in some food dishes like Grassy Gruel, and can even be used as fuel to increase Devotion speed when you’ve unlocked the required Divine Inspiration upgrades.

Grass can be found by chopping down the tall, grassy bushes around the various rooms while Crusading. Most areas contain grass, but Darkwood is full of it. So, if you ever need grass, just make a quick run through Darkwood and be sure to chop everything down.

How to Get More Money and Gold Bars

Money makes the world go ’round, and that’s still true in Cult of the Lamb. In order to build out your cult, and purchase various items from shops and merchants you can meet, you’ll need to get ahold of some finances. Luckily there are plenty of ways to obtain more:

Once your have upgraded your Divine Inspiration to a high enough tier, certain buildings will require Gold Bars instead of regular coin, and late game merchants will also require it. This cannot be obtained naturally, but instead you will have to build a Refinery and order your Followers to consecrate coin into gold bars for you. The Refinery also consecrates coin from Gold Nuggets that you can get as loot rewards from chests or certain rocks, so always turn your nuggets into coin!

How to Get More Camellia Flowers

Camellia Flowers are a region-specific item, and can be used to treat sickness with followers who fall ill, in conjunction with a Healing Bay that you can build. If several followers fall sick at once, you’ll want to have a good amount stocked up. They are also used for a few types of decorations.

How to Get More Menticide Mushrooms

Menticide Mushrooms are a strange hallucinogenic mushroom that are part of a quest to unlock a Brainwashing Ritual, which will lock in your Faith for several days – allowing you to get away with almost anything. While they can’t be eaten as food, it’s still worth stockpiling a bunch. They are also used for a few types of decorations.

How to Get More Crystal Shards

Crystal Shards are used for in conjunction with a quest to help fix the Lighthouse at the Pilgrim’s Passage, but you may learn of this quest long before you are able to find any Crystal Shards naturally. They are also used for a few types of decorations.

How to Get More Spider Silk

Spider Silk is used to build the highest tier of beds for your Followers once you’ve unlocked the final tier of Divine Inspiration, but you may not have access to a place where you can get the silk just yet. They are also used for a few types of decorations.

How to Get More Food

Food is vital to your Cult’s longevity, and something you’ll always need to be on the lookout for. Thankfully, it comes in many different forms – some more abundant, and some to be used in emergency situations.

How to Get Rare Fish

If you’re wondering how to get lobster and other rare fish, look no further! Like the standard, smaller fish, you can catch rare fish such as octopus, crab, lobster, and squid at the fishing area in Pilgrim’s Passage. Not only are these needed to complete The Fisherman’s quest, but they can also be used in higher-quality food dishes, or sold for gold.

Even better, if you unlock the Ritual of the Ocean’s Bounty as a Doctrine for your Cult, you’ll gain access to double fish for two days – including a far better likelihood of catching rare fish such as lobster, octopus, and more. The photo featured above is a good indicator of just how many fish spawn during this period.

When exploring combat rooms or even those marked as with a ? on the map, you may stumble into random boons full of different types of supplies.

Looking for more help? Jump back to our How To Guides hub for even more tips and tricks to ensure your Cult runs like a well-oiled machine.

Up Next: How to Raise Your Faith

Was this guide helpful?

In This Wiki Guide

Check out the teaser trailer for The Little Mermaid, the upcoming live-action reimagining of the animated musical classic. The film stars Halle Bailey as Ariel, Daveed Diggs as the voice of Sebastian, Jacob Tremblay as the voice of Flounder, Awkwafina as the voice of Scuttle, Jonah Hauer-King as Prince Eric, Art Malik as Sir Grimsby, Noma Dumezweni as Queen Selina, Javier Bardem as King Triton, and Melissa McCarthy as Ursula. The Little Mermaid is the beloved story of Ariel, a beautiful and spirited young mermaid with a thirst for adventure. The youngest of King Triton’s daughters, and the most defiant, Ariel longs to find out more about the world beyond the sea, and while visiting the surface, falls for the dashing Prince Eric. While mermaids are forbidden to interact with humans, Ariel must follow her heart. She makes a deal with the evil sea witch, Ursula, which gives her a chance to experience life on land, but ultimately places her life – and her father’s crown – in jeopardy. The Little Mermaid, directed by Rob Marshall, opens in theaters nationwide on May 26, 2023.