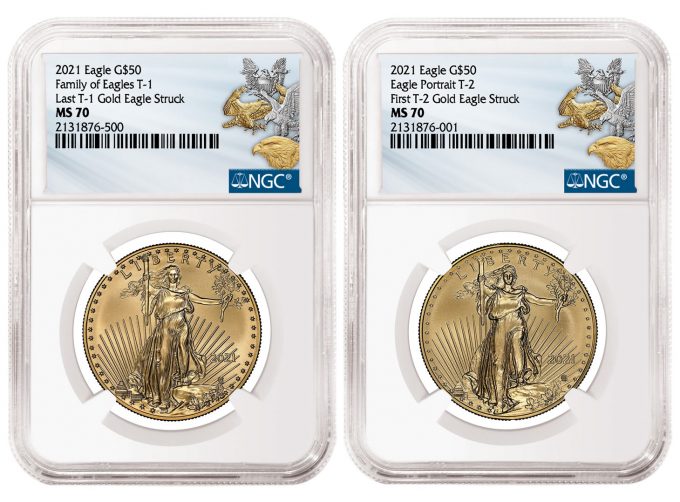 An American Gold Eagle and American Silver Eagle that were certified by Numismatic Guaranty Company (NGC) have sold for a stunning $100,000 and $85,000, respectively. The “Dawn and Dusk” 35th Anniversary Auction was presented by Stack’s Bowers Galleries on September 1, 2022.

The coins were among 1,000 Gold and Silver Eagles that NGC certified from a historic transition in the coins’ designs that took place in 2021. Recognizing their importance to the numismatic community, the US Mint held a special striking ceremony for the final group of Gold and Silver Eagles bearing the original design and the first ones with the new design. The presses were personally operated by David J. Ryder, who was Mint Director at the time, and Mint officials carefully documented the order in which these coins were struck.

“One of my greatest achievements was overseeing the transformation of the Gold and Silver Eagles for their 35th anniversary,” said Ryder, who was the 34th and 39th Director of the US Mint and is now one of the most-prominent signers in NGC’s Signature Labels program. “We made sure this group of coins captured the excitement that this milestone represents to the numismatic community.”

This is the first time that NGC was able to identify the first and last coins struck in a modern US Mint series, and the auction results highlighted the collector value that NGC helped to unlock. NGC’s certification and encapsulation of these Gold and Silver Eagles will ensure that numismatic value stays with them even as they trade hands in the future. NGC authenticated, graded and attributed these (including the order of their striking) on a special NGC label created exclusively for these coins. The NGC label shows an eagle from each of the four reverses of these coins:

“NGC is honored to have certified these historic coins, whose obverses are rooted in America’s numismatic renaissance over a century ago and whose reverses carry on a tradition of excellence in design and execution,” said NGC Chairman Mark Salzberg. “I am proud to see these Gold and Silver Eagles, with their important provenance attributed by NGC, make numismatic history with these impressive prices.”

Stack’s Bowers Galleries waived the buyer’s premium for the coins, known as the 2021 American Eagle at Dusk and at Dawn 35th Anniversary coins.

Other highlights in the sale included:

NGC is the world’s largest and most trusted third-party grading service for coins, tokens and medals, with more than 55 million collectibles certified. Founded in 1987, NGC provides an accurate, consistent and impartial assessment of authenticity and grade. Every coin that NGC certifies is backed by the comprehensive NGC Guarantee of authenticity and grade, which gives buyers greater confidence. This results in higher prices realized and greater liquidity for NGC-certified coins. To learn more, visit NGCcoin.com.