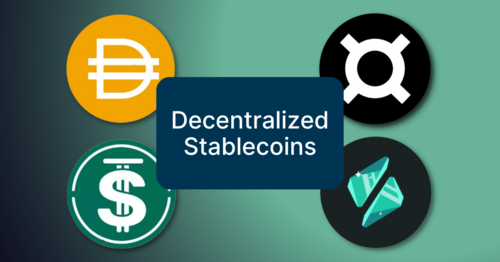 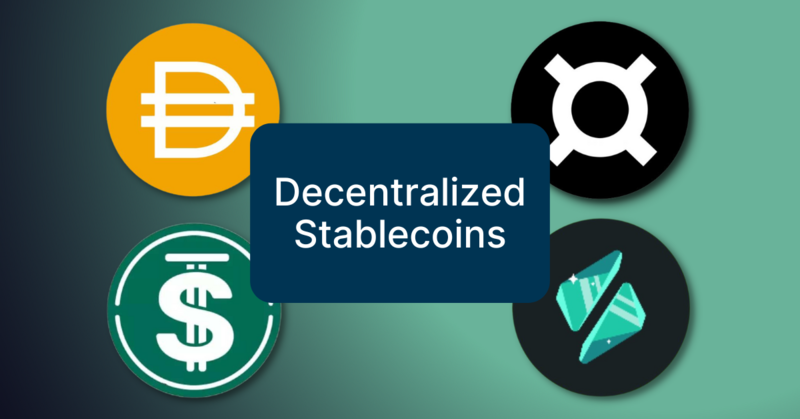 Decentralized stablecoins maintain their peg using protocols and mathematical algorithms and are controlled by a structured cryptocurrency community instead of a single central body. They are a unique kind of stablecoins. But what are ‘stablecoins’?

Stablecoins, just like the name suggests are less prone to the constant fluctuations that other cryptocurrencies are known with. Popular stablecoins are usually pegged to the value of a national fiat currency. The US dollar being the global standard for fiat currency and mainstream business is a prominent stablecoin peg. Stablecoins have been pegged to other fiat currencies as well.

Stablecoin giant – Tether has issued stablecoins pegged to the British pound (EURT) and the Chinese Yuan (CNH) in addition to the USDT which they are popularly known for. In a recent announcement, Tether has shared its plans to issue a new stablecoin pegged to a North American country – Mexico’s Peso. The Mexican Peso has successfully launched and is issued by Tether with the MXNT ticker.

Stablecoins are served as a reference to a mainstream commodity or currency and are used as a reference system in cryptocurrency trading and can also be spent like any other currency, where they are accepted. They simplify transactions and are a good store of value. Their stability makes them more suitable for saving and trading against more volatile assets. Relative to the actual assets or currencies, they are built on a more flexible and secure technology – the blockchain.

Overcollaterized stablecoins are structured in a way that an excess collateral vault is built to maintain the stablecoin’s peg. MarkerDAO’s DAI is the first overcollateralized stablecoin. DAI is pegged at a 1:1 ratio with the US dollar. The minting of the DAI and maintenance of its US dollar is guided by the Marker protocol lending system.

In the case of DAI, the MarkerDAO lending system is designed to allow users to borrow less than the worth of the collateral they supplied. The loan protocol specifies a 150% collateral system. That is, users can mint DAI by locking 150% of the value of the DAI they wish to borrow. For instance, to mint $100 worth of DAI, $150 of ETH or other approved assets must be locked.

When a user locks their asset, they mint an amount of DAI as a loan. The minted DAI can be used like any other cryptocurrency. The excess collateral system ensures that every DAI in circulation is backed by an excess store of assets. Interest is accrued over time on the minted/borrowed DAI. When this minted DAI and the interest is paid back, the collateral is released to the user while the DAI is burnt.

A loan liquidation system was developed to save the Marker protocol from ‘risky loans’ and keep the protocol running. This will be explained in the later part of this article.

Algorithmic stablecoins are programmed to respond to presiding supply and demand forces to maintain a pre-defined peg.

Most algorithmic stablecoin projects operate a dual token system: A stablecoin, and a volatile asset that maintains the peg of the stablecoin by sustaining the demand and supply system that keeps the stablecoin’s value intact.

Tron’s USDD and Terra’s (now defunct) USTC are two popular examples of algorithmic stablecoins. Minting the USDD or USTC burns an exact value of the other asset. For instance, when you mint 10$ worth of USDD; 10$ worth of TRON (TRX) is burnt as well. To redeem TRX, USDD is burnt.

Traders and arbitragers are incentivized by variations in the value of the stablecoin. When the stablecoin strays away from its peg, traders buy the stablecoin coin at the current price and burn them to redeem the volatile asset (like TRX and LUNC) at the value of $1. For example, when USDD trades at 0.95$, traders can buy USDD at 0.95$ and redeem them for TRX at 1$ per USDD, generating a $0.05 profit.

Anchor protocol’s two principal assets are UST and LUNC. Lenders supply USTC to the protocol, borrowers provide collateral (LUNC) and borrow the supplied USTC for a specified time and pay a stated interest when this loan is repaid.

Borrowers on Anchor protocol can only borrow a fraction of the supplied collateral, a maximum of 60% of the value of the volatile asset they provided. This percentage is determined by the loan-to-value (LTV) ratio. The LTV ratio is a function of the quality of collateral provided by the borrower.

For instance, Alice owns 100 UST in her saving. As an obviously better alternative to keeping 100UST dormant in her wallet, she supplies her stablecoin to Anchor protocol. On the other side, Bob owns $100 worth of Luna but doesn’t wish to sell his Luna to pay off his bills. Bob decides to borrow some UST from the anchor protocol and repay his bills while he keeps his Luna. To borrow from the protocol, Bob offers his Luna as collateral, but can only borrow a maximum of 60UST (60% of the $100 worth of LUNA he provided) from Alice’s 100UST from the Anchor protocol. To repay this loan, Bob pays the borrowed 60UST and interest which is distributed to Alice.

As mentioned in the Marker protocol, the loan liquidation was introduced to free the Marker and Anchor protocol of risky loans. Cryptocurrencies are highly volatile. They are ‘high-risk assets’, for investing and lending as well. Considering the possibility of the volatile assets provided as collateral dropping below 60% of their value at the time the loan was taken, the loan liquidation protocol serves to save the lending system and keep the lending/minting service running.

Anchor protocol’s oracle contract feeds the protocol with the current values of the provided assets. When a dip below 60% of asset value (at the time of the loan) is detected, the loan is put up for liquidation on the liquidation queue. The liquidation queue serves as the exchange between collateral and borrowed stablecoin

As compensation, liquidators are offered an opportunity to liquidate the loan at a discount on the value of the collateral. This is known as a Premium and can be as high as 30% or as low as 1%. Liquidators can bid at any range within this discount. Liquidators who bid at the smaller discount percentage stand higher chances of redeeming the collateral. When a bid is accepted, the liquidator now claims ownership of the collateral supplied in the now ‘at-risk’ loan. This keeps the lending protocol running.

Anchor protocol’s algorithms worked considerably well on introduction. Unfortunately, the borrowing side of the protocol got overwhelmed as more people locked their assets and fewer people borrowed from the protocol. The algorithmic stablecoin system built around this protocol soon collapsed (more on this later).

Frax operates two stablecoins: FRAX (a stablecoin pegged to the US dollar) & FPI (pegged to the US Consumer Price Index). The FRAX and FPI stablecoins are also maintained by two separate DAOs guided by FXS (Frax share) and FPIS (FPI shares) respectively. The Frax Finance economy is composed primarily of the two stablecoins, a native AMM (Fraxswap), and a lending facility (Fraxlend). 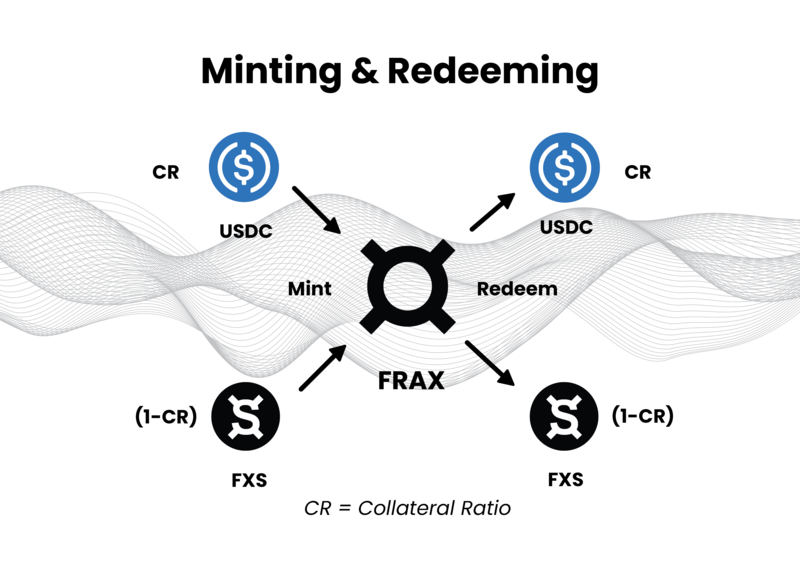 A 50% collateral ratio means that a user who wishes to mint 1$ worth of FRAX will have to provide $0.5 worth of USDC and $0.5 worth of FXS. The provided FXS is burnt when redeeming at the same ratio, the user will receive 0.5$ USDC and 0.5$ FXS for every FRAX they provide. Redeeming FXS and USDC burns the provided FRAX.

Two parties are involved in the RAI system. The SAFE users that mint RAI using their Ethereum and RAI holders. Depending on the supply and demand conditions, both parties are incentivized to mint RAI or redeem their assets respectively. This keeps the system stable.

A lending protocol guided by the redemption rate incentivizes users to pay back their debts or borrow from the pool. To borrow from the RAI protocol, users will be required to lock their assets in the protocol and mint/borrow a stablecoin.

The value of the RAI is determined by the redemption rate. The RAI is completely in congruence with the presiding demand and supply conditions instead of being pegged like DAI. The RAI system connects with a price feed technology and updates the redemption price whenever a price update is received for the approved collaterals.

RAI opines that this system was the initial system proposed by MarkerDAO for the DAI. The RAI system presents a wider reward range to users.

Decentralized stablecoins are borne out of an audacious attempt to create a stable value using mathematical systems. As expected, there have been a good number of arguments against the ability of these systems to create actual value and maintain their stability.

Some of these arguments include:

To learn more about the effects of Terra’s collapse, read CoinGecko’s Q2 2022 report.

The USTC incident clouded other de-pegging events. A good number of decentralized stablecoins lost their pegs during this time. Some have since recovered and reclaimed their peg, while others have failed to do the same.

Many questions have been raised as regards the level of decentralization in decentralized stablecoin projects. The DAO system allows the community to decide the fate of the project. But this system is still prone to modifications against the will of the community. Project teams are also reported to be devising means to rig community votes in their favor. In cases like this, the projects are far from being truly decentralized.

Regardless, this doesn’t rid their brilliance and affirms the fact that systems like these are still in their earliest stage of development. Each failed decentralized stablecoin births a new one with proposed fixes for the former. The constant improvements in this concept might (hopefully) culminate into a perfectly functioning decentralized stablecoin system.

A perfect decentralized stablecoin system has many advantages over the centralized versions. A system guided by mathematics and resistant to third-party influence. This could create a truly sovereign stablecoin system with a sustainable peg. A double utility – financial and political.

In the financial aspect, a well-functioning decentralized stablecoin hand cryptocurrency enthusiasts a strong financial tool. One built with the technology they understand. It presents a stable reverence point and means of storing value.

Politically, decentralized stablecoins are transparent enough, and their authenticity can be easily verified by regulatory bodies. Their resistance to censorship adds an extra layer of comfort for holders and traders.

Having said these, it is important to understand that novel systems like decentralized stablecoins are still prone to dysfunctions. This is seen in the case of USTC and other decentralized stablecoins that lost their pegs in the past or have had their systems exploited, leaving users with grave losses. It is important to consider the safety levels of these systems and tread with caution to avert or minimize losses.

What are the top 5 largest stablecoins by market cap? Read this article to find out!

Joel loves discussing cryptocurrency and blockchain technology. He is the founder of CryptocurrencyScripts.
Follow the author on Twitter @agboifesinachi