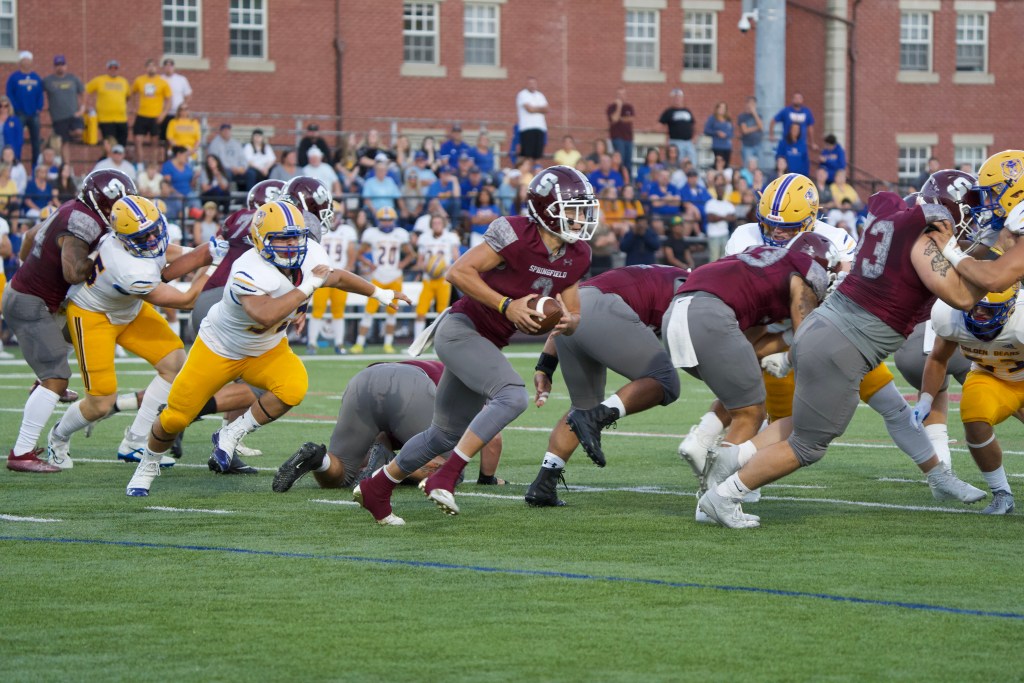 After a pair of games in which the Springfield College football team scored 42 and 35 points respectively, the Union College defense had a tall task. The Dutchmen stood up to it and held the Pride to 4.2 yards per play after averaging 6.0 yards per play heading into Saturday’s matchup. They only let two plays go beyond 15 yards, and ultimately allowed just six points in a 21-6 victory at Stagg Field.

“[Union’s defense] did a nice job,” said Springfield head coach Mike Cerasuolo. “They tried to flatten everything out, and at times they did that. They had movements that worked for them.”

To open the game, Springfield won the coin toss and deferred to give Union the ball. The Pride seemed to be in a very comfortable position when the Dutchmen committed two penalties to start the drive and put themselves in a first-and-25 situation at their own 12 yard-line. However, on second-and-20, Union quarterback Donovan Pacatte connected with Robbie Tolbert for a 28-yard pass. The next play was a 29-yard rush by Ike Irabor, and following that was a 26-yard touchdown pass to Andre Ross Jr.

When Union kicked the ball off, Springfield’s Tyler Paladino returned it to the Union 48 yard-line. After the Pride committed a 15-yard clipping penalty, they were the beneficiary of a big break when the Dutchmen committed an unsportsmanlike conduct penalty for an automatic first down. When they were on Union’s 41 yard-line, David Wells hit Dante Vasquez on the outside past the first down marker, and Vasquez held on after a big hit from a Dutchmen defender.

Springfield did not follow that with another first down, but the play brought them within field goal range. Christian Hutra split the uprights on a 43-yard field goal to make it 7-3 about halfway through the first quarter.

The rest of the quarter was a defensive standstill until Springfield began to drive in the second quarter, starting at its own 33 yard-line. The Pride used their versatile rushing attack to consistently get first downs. They converted three third-down situations — all via the run.

Springfield got the ball within Union’s 10 yard-line, setting up Hutra for a 26-yard field goal to make it 7-6.

The Dutchmen responded quickly. After a six-yard rush brought them to their 32-yard line, Pacette launched a deep ball down the right sideline that was caught by Nicholas Dunnem and carried to the Springfield 20 yard-line. Later, on a third-and-goal situation at the nine yard-line, Pacette dropped back to throw, then tucked the ball in to run. He took hits from his right and left but stayed up until he was eventually brought down at the one yard-line. After the referees marked the ball down, Union quickly lined up and handed the ball off to Jonathan Anders up the middle for a touchdown.

What ensued from that point until the final minutes was a struggle for points. After Union’s touchdown, the two teams combined for four consecutive drives that did not go beyond 20 yards. Then with 12:10 left in the third quarter with Springfield on its own 34 yard-line, Wells kept the ball on the triple option and found a big hole on the right side, then broke through the three levels of the defense and was not tackled until he reached Union’s 25 yard-line. That was followed up with a 10-yard rush by Joseph Cannizaro.

On the next set of downs, Springfield found itself in a fourth-and-two situation on Union’s seven yard-line. Wells faked a handoff, and most of the defense fell for the deception. However, Union linebacker Nathan Sullivan dropped back into coverage and intercepted the ball that was intended for a Springfield receiver on a slant pattern.

Each team punted to each other before the Dutchmen got into the Pride’s territory. They were within the 30-yard line and Pacette threw one over the middle to one of his dangerous wide receivers. However, Springfield linebacker Aiden Lewin was there first, and hauled in an interception to stop the scoring threat.

The teams continued to trade punts before the Pride defense came up with another high-impact play. With 7:31 left in the fourth quarter, Pacette ran the ball up the middle and was met by Springfield defensive tackle Terrell Jacobs-Baston, who knocked the ball loose to cause a fumble. Springfield defensive back Amir Preston recovered it on the Union 34 yard-line.

The Pride converted a fourth down, then found themselves in yet another fourth down situation at the 12 yard-line. On fourth-and-four, the ball was pitched out to Jacob Silvester, who was stopped for no gain and a turnover on downs with 3:57 left in regulation.

Union running back Ike Irabor ran for two yards before a pair of six-yard rushes. Then, at the Dutchmen 24 yard-line on a first-and-10, Irabor ran to the right to get past the line. As he reached the linebackers, he switched his direction and found an open lane. It was ultimately a footrace to the end zone — with Irabor winning and scoring a touchdown with 1:38 to go to bring the game to its final score, 21-6.

Springfield’s next game comes on September 24 against Husson at Stagg Field at 12 p.m.