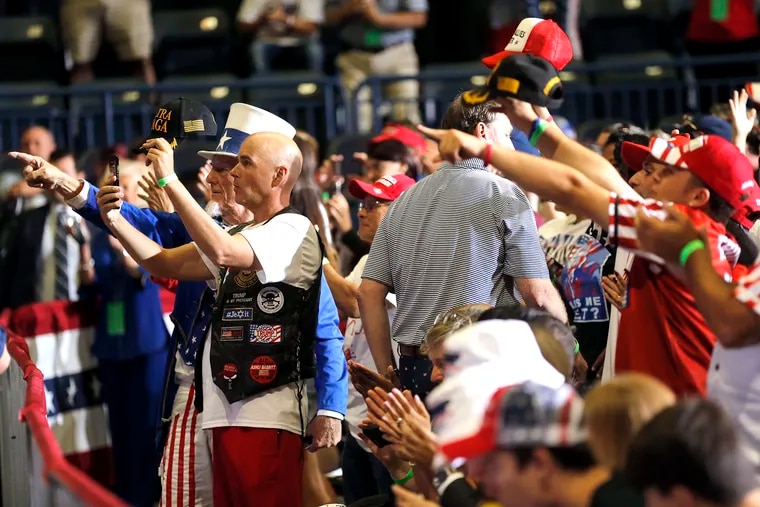 If you are a political fanatic, you’ve surely heard the old saying that when fascism comes to America, it will come wrapped in the flag and carrying a cross. That’s been proven true in this fraught year of 2022 as Christian nationalism rises to our extreme right, but no one predicted this:

That U.S. authoritarianism would also come with a bat-guano crazy musical soundtrack — music that sounds like a Bible Belt altar riff, but is actually tied to the weirdly popular QAnon conspiracy theory whose legion of followers believe there’s an elite global cabal of child-trafficking, baby-blood-drinking liberal politicians and movie stars.

This terrifying crossing of some kind of autocratic Rubicon happened — where else? — at a Donald Trump rally in Youngstown, Ohio, on Saturday night.

Trump rallies are a tricky thing to cover, some 20 months after the 45th president left the White House in seeming disgrace after a failed coup and two impeachments. There’s an understandable desire to want to not give these increasingly hate-drenched rallies any oxygen, in the vain hope the flame will completely flicker out. And his Fidel Castro-length rants increasingly offer little political insight but long flights of narcissistic grievance about his 2020 election loss and an enemies list that grows longer each day.

But even had it been stripped of its creepy musical backing, Trump’s apocalyptic closing diatribe from an arena in the epicenter of Rust Belt industrial decay demands our attention — as the current front-runner for the 2024 GOP presidential nomination continues to steer his followers toward an authoritarian cult of personality, committed more to its warped leader and his perceived slights than any justifiable cause.

Trump insisted, without evidence, that Russia’s bloody unprovoked invasion of Ukraine “never would have happened with me as your commander-in-chief, and for four long years it didn’t happen.” The ex-POTUS veered from China threatening Taiwan, to a litany of grievances against the FBI agents and prosecutors honing in on his cache of top-secret documents and his post-2020 election tampering, to an old enemy in the media: “Fake news is all you get, and they are truly the enemy of the people.” That echo of Joseph Stalin wasn’t his only callback to an era where rising dictatorship inevitably led to death on a massive scale. “We have a president who is cognitively impaired,” Trump said, falsely, “and in no condition to lead our country, which may end up in World War III.”

The ax-grinding is getting worse, but the music is new.

The swelling, quasi-religious (or maybe late-night inspirational infomercial) melody that accompanied Trump’s Ohio jeremiad wasn’t random, according to Trump-tracking experts. Last month, the left-leaning watchdog group Media Matters for America identified that rising melody — hinting of a coming storm — that appeared again Saturday in Youngstown as either a) “Wwg1wga,” with its title an abbreviation of the main QAnon slogan “where we go one, we go all,” that was posted to Spotify in 2020 and often appears with online posts about the conspiracy theory, or b) an exactly identical number called “Mirrors,” as claimed by Team Trump.

Media Matters noted Trump’s use of the tune in an August posting of an anti-Biden rant to his website Truth Social sparked praise and great excitement in the online community of QAnon true believers, with one saying it “might be the biggest nod they’ve ever given us [to be honest].” Wrote another: “That’s not an accident. Team Trump knows exactly what they’re doing.”

Seems so. This week — as legal filings expose the seriousness of the federal probe into his taking classified documents to Mar-a-Lago, while prosecutors turn up the heat on his close allies around the Jan. 6 insurrection — a panicked Trump went full QAnon in a posting spree on Truth Social, including a photo of the ex-president wearing a “Q” lapel pin over the key slogans of the conspiracy theory, that “a storm is coming” and “Wwg1wga.”

The most striking thing about Trump’s Wagnerian moment in Youngstown on Saturday was the reaction of the crowd in the not-full arena, many of whom raised their right arm forward as the music swelled. Most also raised up their index finger or a No. 1 symbol indicative of the QAnon slogan, a callback to their Dear Leader that they “got it.” Several even flashed the “Q” hand signal. The photos and videos of mass, zombie-like right-arm obedience to America’s wannabe dictator rekindled chilling memories of Nuremberg rallies or Leni Riefenstahl documentaries, of the terrible places that cultlike devotion can lead.

Donald Trump is counting on this to save him. He told interviewer Hugh Hewitt there’d be “problems in this country the likes of which perhaps we’ve never seen before” if he is criminally indicted. Experts in authoritarianism who saw videos of the Youngstown rally said they are alarmed at the increasingly fascistic tone of his movement, and his blatant appeals to violence.

Seth Cotlar, Willamette University historian focused on the far right, called the rally a validation of his prediction that Trump was headed “toward something more closely resembling a warlord. At this point his rallies mostly just involve him pointing at ‘enemies of the people’ and waiting for his supporters to do the rest.”

» READ MORE: At Texas rally, Trump all but promised a racially charged civil war if he’s indicted | Will Bunch

Agreed Ruth Ben-Ghiat, the New York University historian who studies dictators: “Trump is a national security threat. He is radicalizing QAnon [people] further and exposing others at these rallies. He is preparing them to be his next army of thugs, ready to do his bidding when he needs them.”

Some might like to pretend that this is strictly a “Donald Trump problem,” a would-be felon desperate to save his own skin. But the reality is that this fascistic virus has infected most of the Republican Party, on the eve of a midterm election where the American Experiment itself is up for grabs. The FPOTUS was in Ohio, after all, to endorse and rally support for the GOP’s grateful Senate hopeful, J.D. Vance. That candidate — who rose to prominence with a Hillbilly Elegy promising hope that he could lead others down a path away from Appalachian dysfunction as he’d done on his own Ivy League odyssey — has instead embraced Trump and his ugliest instincts.

As the fall campaign begins, the signs of rising Republican fascism — rallying the masses by dehumanizing “out” groups like migrants or the LGBTQ community, or the idea that Christian law trumps pluralistic democracy — are everywhere. You certainly saw it last week in the unlikely setting of Martha’s Vineyard — where Trump’s chief rival to lead the GOP, Florida Gov. Ron DeSantis, took credit for what amounted to a kidnapping of 50 Venezuelan migrants, seen not as hungry human beings but as pawns in a political game.

And we’re seeing it here in my home state of Pennsylvania, where the Republican gubernatorial nominee, State Sen. Doug Mastriano — an enthusiast for the Big Lie of election fraud and a Jan. 6 participant — is openly embracing Christian nationalism. His last rally on Friday featured both Donald Trump Jr. and a well-known leader of this movement to lord religion over politics, the Texas pastor Lance Wallnau, who endorsed Mastriano and predicted “a new birth of liberty.”

Some 24 hours later, Trump senior ended his Ohio event with the musical notes of what’s known as “an altar call.” Don’t call it a coincidence. Call it Christian fascism. Will it lead to violence? It already has, as in the recent case of the Michigan man who killed his wife and injured his daughter after falling down the QAnon rabbit hole after the 2020 election. And it can only get worse.

As I awoke Sunday morning to the predictable shock and awe over Trump’s newest outrage, a song got stuck in my head. Not “Wwa1wga” or “Mirrors” or whatever the heck that was behind Trump, but the one that Bruce Springsteen released back in 1995, when the rust-bitten smokestacks of the Mahoning Valley were beginning to tumble. In “Youngstown,” The Boss sang of the bitter disillusionment of veterans who fought for America in World War II and Vietnam only to lose the war for prosperity at home.

Left unsaid by Springsteen was how these resentments, when allowed to fester, can and will be exploited by the very worst people — the hucksters and con men using you to save themselves and probably make a buck, as with the gold coin ads that now flash on TV telecasts of Trump rallies. What transpired Saturday was a culmination of an American nightmare. It can’t happen here? It just did. Here in Youngstown.