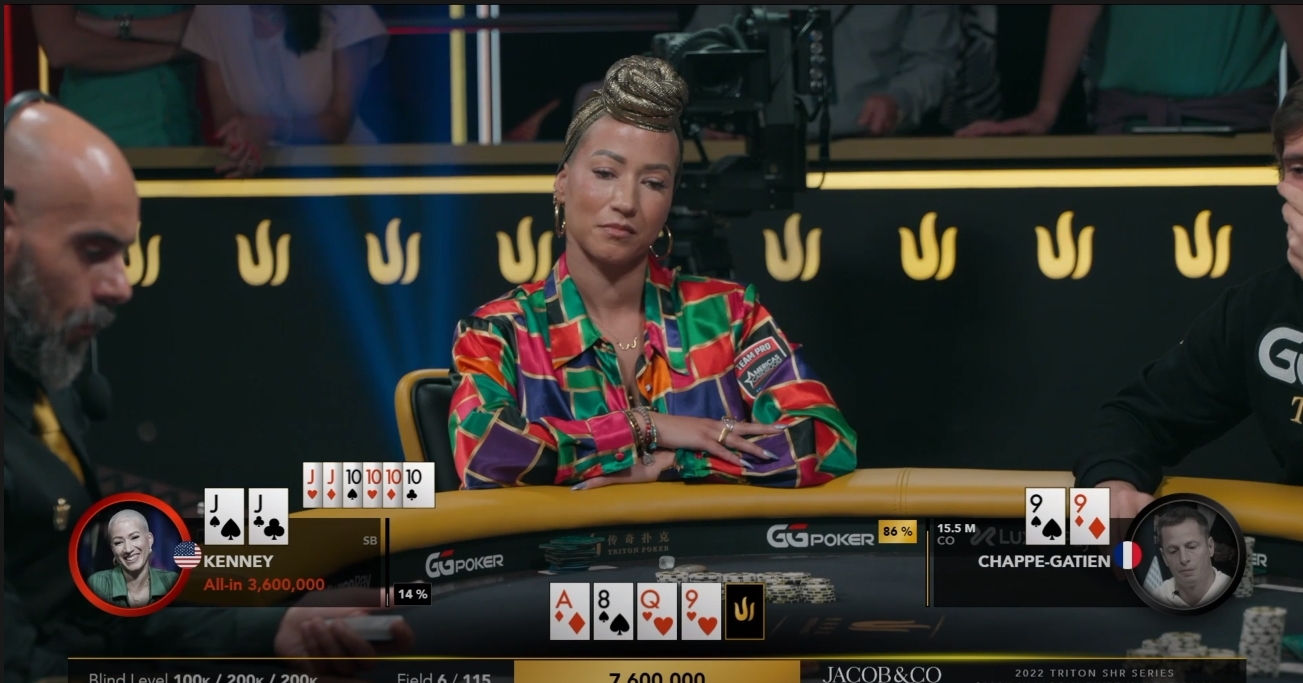 Ebony Kenney, a fan favorite in the $200,000 buy-in Coin Rivet Invitational, her first super high roller, finished in fifth place for $1,700,000. In doing so, she came just one card (literally) away from setting the record for the largest live tournament cash ever by a woman.

The high-stakes no-limit hold’em event attracted 115 entrants to the Merit Royal Diamond Hotel & Spa. Among those players were the likes of Phil Ivey, Fedor Holz, Tony G, and Patrik Antonius, the usual suspects in the biggest tournaments around the world.

Kenney, who previously had $657,000 in live tournament cashes, according to Hendon Mob, was one of the many non-high roller regulars competing in the Coin Rivet Invitational. But she had no problem keeping up with those who are accustomed to playing for such high stakes, as evidenced by her fifth place finish.

With that deep run, she collected the fifth-largest score ever by a woman. On her final hand, she lost with pocket jacks against the pocket nines of Karl Chappe-Gatien, who turned a nine and held on to win the pot.

Despite the bad beat, Kenney increased her Hendon Mob results to $2,357,000 lifetime. The $1.7 million score was impressive, but had she won the hand against Chappe-Gatien, it’s likely she would have moved up a spot (or more) at the final table, which would have been meaningful for more than just the increased payout.

A fourth-place finish in the Coin Rivet Invitational, which Holz earned, paid $2,100,000. Why is that such a meaningful number? Because it would have been the biggest cash ever by a female.

So, who still holds that record? You’re likely thinking Kristen Foxen, Vanessa Selbst, or maybe even Jennifer Harman (although she is more of a cash game player), but you’d be incorrect with any of those guesses.

The correct answer is Annette Obrestad, who set multiple records in the same event — the 2007 World Series of Poker Europe Main Event, which paid the champion $2,013,733. In winning that tournament, the former online crusher known as “Annette_15” became the youngest WSOP bracelet winner ever (one day before her 19th birthday).

These days, Obrestad doesn’t play much poker and now has a makeup review and advice YouTube channel.

Obrestad’s massive score in 2007 surpassed the previous record for a female set by Annie Duke — $2,000,000 — who beat Phil Hellmuth heads-up to win the 2004 WSOP Tournament of Champions.

Selbst, the former longtime PokerStars ambassador, still sits in third place on this impressive list for her $1,823,400 score when she won the 2010 Partouche Poker Tour Main Event. She is far and away the all-time live tournament earnings leader among women with $11.9 million lifetime.

As for fourth place on the list, that goes to Kathy Lehne, who took third place for $1,785,000 in a 2019 partypoker LIVE Millions Super High Roller.

PokerNews will have a recap of the $200,000 buy-in Coin Rivet Invitational once a winner is crowned.