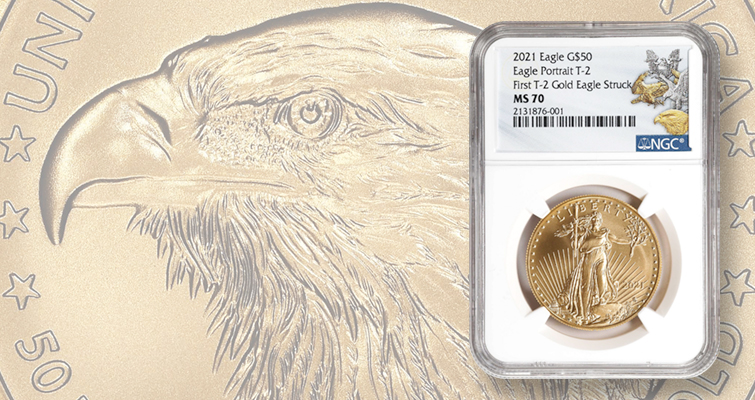 The Stack’s Bowers Galleries Sept. 1 sale of 2021 American Eagle silver and gold bullion coins from the last production of Reverse of 1986 coins and the first of the Reverse of 2021 issues generated prices realized of $4,616,700, including one American Eagle gold coin that had a six-figure final bid.

No buyer’s fee was added to the closing hammer price of each lot won.

The coins offered for sale were from production that departing U.S. Mint Director David J. Ryder executed at the West Point Mint on April 13, 2021.

The 700-lot sale Sept. 1 offered 2,000 coins total, in single-, double- and quadruple-coin lots — the last 500 pieces struck of the old Reverse of 1986 designs and the first 500 pieces struck of the new Reverse of 2021 designs of each American Eagle 1-ounce gold and 1-ounce silver issue — evenly divided between issues graded and encapsulated by Professional Coin Grading Service and by Numismatic Guaranty Co.

The grading labels from the grading services all pedigree the coins to the April 13 production and identify the order each coin was struck as Ryder depressed the coinage press buttons to render the strikings.

The 2021 American Eagle, Reverse of 1986 silver coins use sculptor Adolph A. Weinman’s Walking Liberty design from the Walking Liberty half dollar, which was adapted for the American Eagle silver dollar when it was introduced in the fall of 1986. Weinman’s obverse was paired with the Heraldic Eagle reverse designed and engraved by now retired U.S. Mint Chief Engraver John Mercanti.

The edges of the Reverse of 2021 coins and subsequent issues are notched at roughly the 6 o’clock position, interrupting the reeding, and intended as one of many anti-counterfeiting devices.