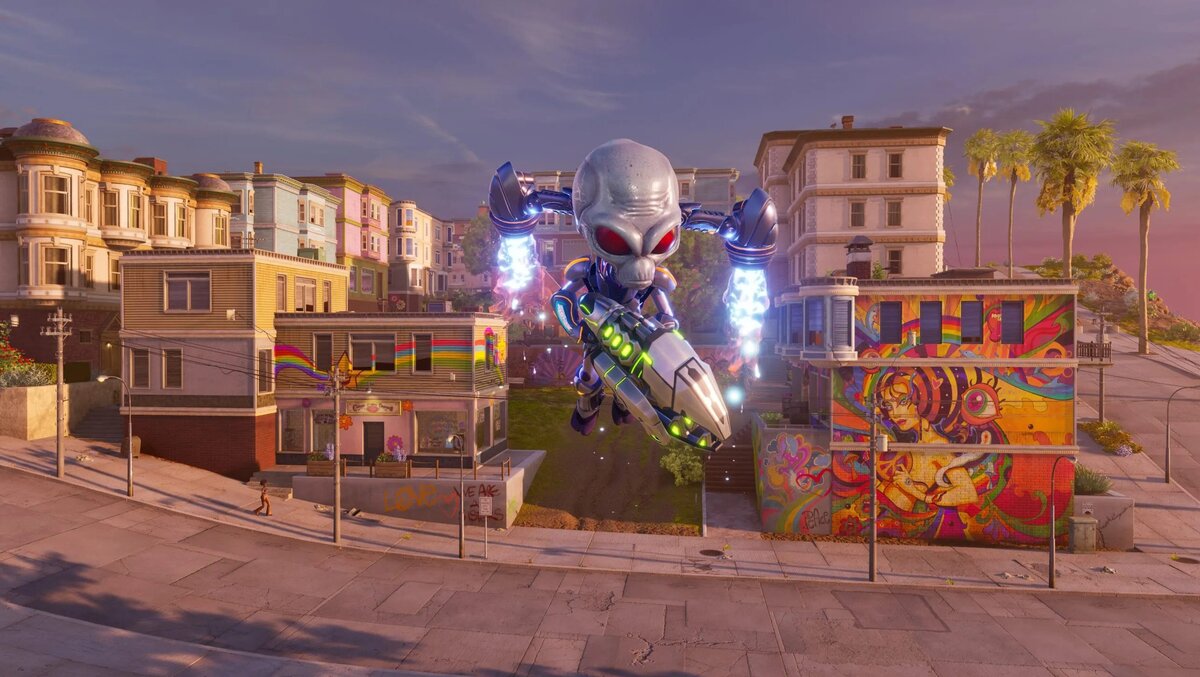 The Destroy All Humans! franchise first debuted back in 2005 for the PS2 and Xbox era of games. The franchise sadly kind of died off shortly after this, but the series made its return thanks to a pair of remakes for modern consoles.

The first remake to be released was 2020’s Destroy All Humans! This version of the game was pretty much similar to the original release, although it featured better graphics and fun gameplay. This version was available for PC, PS4, Xbox One and even Nintendo Switch.

2022 finally sees the release of Destroy All Humans! 2: Reprobed. Much like the 2020 release, this is a remake that makes the 2006 version of the game look superior thanks to the introduction of new hardware.

Surprisingly, Destroy All Humans! 2: Reprobed has only been released for the more modern PC, PS5, and Xbox Series X/S platforms. Sadly, you won’t be able to play this remake on PS4, Xbox One or Nintendo Switch even though the game doesn’t look all that visually demanding.

That being said, this remake looks gorgeous if you are playing it on the PS5 console. I remember playing the original remake on Xbox One two years ago, but this sequel looks far better than that. Obviously, the PS5 version looks miles better than the PS2/Xbox iterations from 2006.

Even though the five cities are smaller than most modern open-world games, they still look very detailed and smooth running on PS5. Not to mention the game mostly runs at 60fps which doesn’t slow down no matter how much stuff is going on.

As for the game’s setting, Destroy All Humans! 2 takes place 10 years after the original game in 1969. You get to visit five cities that include fictional representations of San Francisco, London, Tokyo, Tunguska and even a moon base.

In the story itself, you play as an alien named Crypto who wants revenge from the KGB who has sadly blown up his mothership. The story is quite interesting since Crypto meets an attractive female ally, while also needing to kill lots of bad guys and bosses. Not to mention the game has many locations thanks to you visiting many countries from around the world.

In terms of gameplay, there are two modes that you will play in this game. The first one is playing as Crypto on the ground, where the game acts like a standard third-person shooter. While the game lacks a cover system, the gunplay is mostly fun because of the many different weapons that Crypto has in his arsenal.

Aside from weapons, Crypto also has other abilities that make the game fresh and fun to play. If you press the Triangle button multiple times, he can steal the bodies of humans temporarily. This is helpful if you need to enter a restricted area without getting caught by the police or KGB enemies.

Probably the best ability in the entire game is Crypto’s ability to levitate objects and humans. Unlike the guns, there’s no ammo or recharge bar to use the levitation ability. Crypto can use it to throw enemies across the other side of the map, and it’s very humorous to see the enemies flying to their deaths!

The other way you can play the game is when Crypto is able to ride inside of his cool UFO saucer. In some missions, you can fly the UFO to shoot at vehicles, buildings and other types of enemies. Much like Crypto himself, the UFO is armed with different types of guns that will do varying amounts of damage across the city.

What I didn’t like about the first Destroy All Humans! video game is the fact that the missions felt repetitive and boring to play through. Every mission felt the same, and the gunplay in the first game didn’t feel very fun or satisfying.

Thankfully, the missions feel more varied and exciting in the sequel. The sequel makes more use of Crypto’s other weapons and abilities which makes the game far more fun and enjoyable compared to its predecessor. I also feel that people that have never played the franchise before will prefer the sequel thanks to its bigger maps and better combat.

While I enjoyed most of what this game offers, it isn’t a perfect experience. I feel it’s sad that PS4 and Xbox One owners are missing out on this remake. The visuals look nice, although the game could have easily been ported to the older consoles.

The other thing I did not enjoy about the game is that the voice acting sounds outdated and somewhat offensive. It’s very jarring hearing American voice actors trying to speak English in both poorly sounding Russian and Japanese accents…

Aside from a few flaws, Destroy All Humans! 2 Reprobed is a very good remake that has visuals and gameplay better than the original game. It’s also a very unique experience because there aren’t many games out there that allow you to play as aliens!