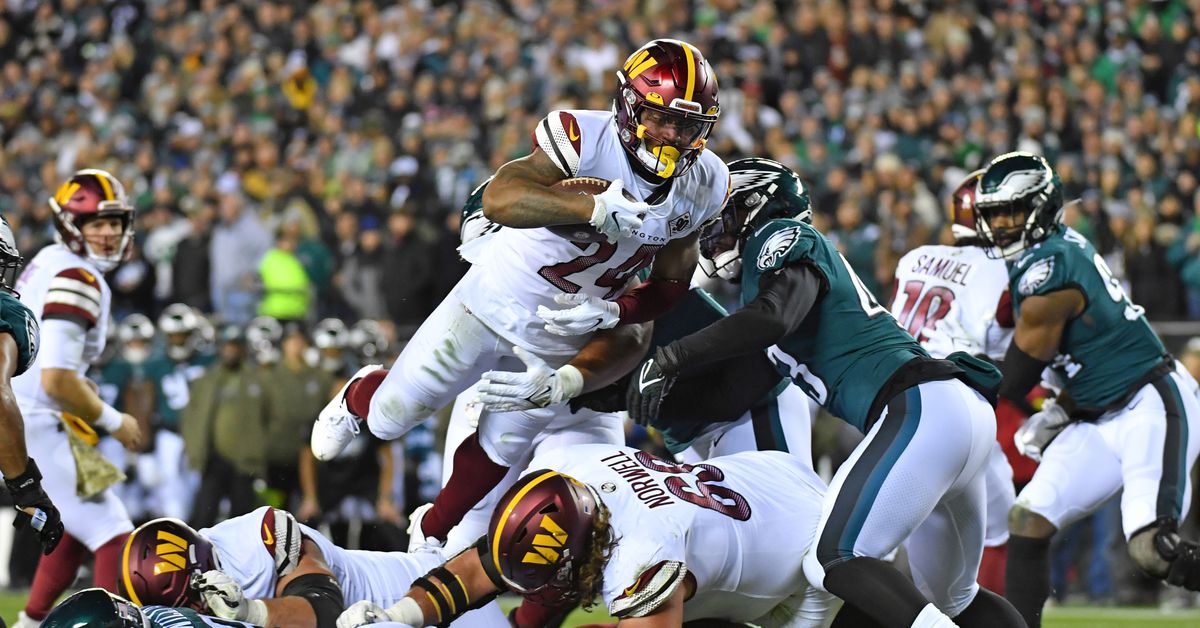 Well, the Philadelphia Eagles are capable of losing a game after all.

The Birds are no longer undefeated after being defeated by the Washington Commanders on Monday night. Final score: 32 to 21.

Pretty disappointment outcome. The Eagles should’ve been able to take care of business in this one as 11.5-point home favorites. Especially when they started the game up 7 to 0 following a Taylor Heinicke fumble.

But Jonathan Gannon’s defense allowed Washington to take a lead by being unable to stop the Commanders’ long scoring drives. Too much bend AND break.

Despite not playing well at all, the Eagles still had a chance to get back in this game. But they ultimately made too many mistakes. Mistakes that were exacerbated by very poor officiating. It’s very hard to understand how the officials didn’t see Dallas Goedert getting facemasked on a play where he fumbled. It’s also hard to see how the refs could allow the game to be decided on Brandon Graham sliding into Heinicke and calling unnecessary roughness.

Ultimately, the Eagles cannot blame the refs for losing. They should have played well to a point where the officiating couldn’t have impacted the outcome like it did. The Birds deserved to lose. That being said, the refs clearly sucked ass. More than one thing can be true.

On the bright side, the Eagles are still in good shape atop the NFC playoff picture at 8-1. They still have a very good path to securing the No. 1 seed.

But losing this game was a missed opportunity for the Birds to maintain their two-game lead over the Minnesota Vikings by virtue of a head-to-head tiebreaker. The loss also takes the sting out of the Dallas Cowboys’ loss to the Green Bay Packers. And puts the New York Giants just one game behind Philly in the NFC East standings.

One will hope this loss serves as a wake-up call for the Birds. They need to be better moving forward.

The Eagles have a chance to rebound with a road game against Jeff Saturday’s Indianapolis Colts up next.

Read on for a recap and stay tuned for BGN’s postgame coverage, including the BGN Radio postgame show.

Commanders ran 50 offensive plays in the first half: most by any team in a game this season.

18 first downs in the first half: fourth-most by a team in a game this season.

The Commanders came into today converting 34.2% of their 3rd downs, good for 27th in the NFL.

Man, what a dreadful sequence with the game (sorta) on the line.

1st down: run, no tempo (running clock!)
2nd down: busted play call (look like the line thought screen)
3rd down: Hurts total panic in the pocket
4th down: fake punt? or not?

For the second time this year, the Philadelphia Eagles are being featured in the Monday Night Football spotlight.

The Birds last played on ESPN all the way back in Week 2, when they took down the Minnesota Vikings to advance to 2-0.

Now the Eagles are looking to remain undefeated by sweeping their season series with the Washington Commanders.

The reasonable expectation is that that’s exactly what will happen in this game. The Eagles are entering this matchup as 11.5-point favorites, according to DraftKings Sportsbook.

By all indications, the Eagles are the better team. They’re also the more rested side having last played on November 3 whereas the Commanders suited up on November 6.

No good excuses to lose this one. Gotta go out and take care of business on a national stage.

Bleeding Green Nation will be covering this game with live updates in the form of highlights, commentary, analysis, etc. Make sure to follow along and refresh the page often.

(NOTE: This is NOT a game thread; it’s a live blog that will turn into a game recap. Use BGN’s designated game threads for each quarter to discuss in-game happenings. The first quarter thread is HERE.)