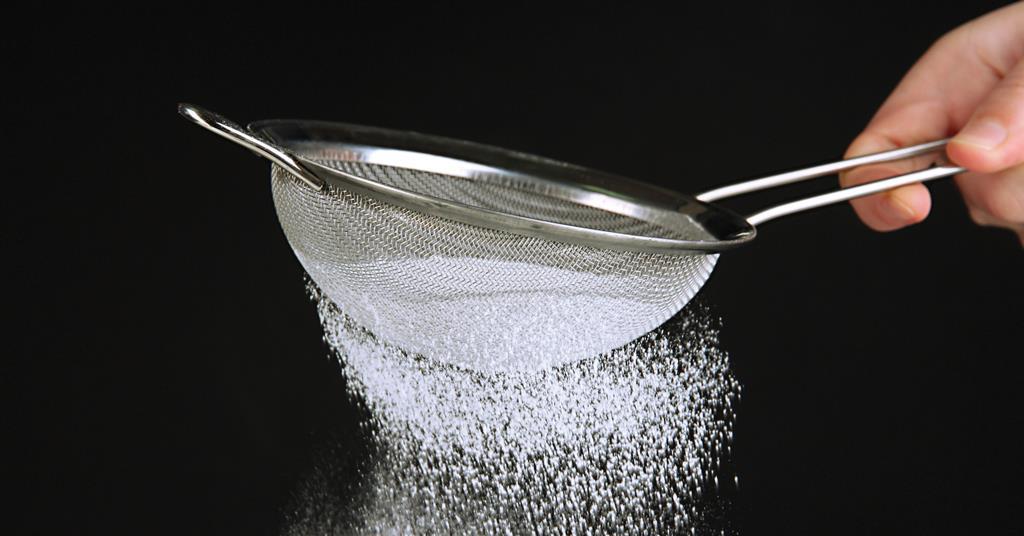 Two metal-organic frameworks (MOFs) have been identified that can effectively separate water isotopes, taking a leap toward solving one of chemistry’s classic problems. 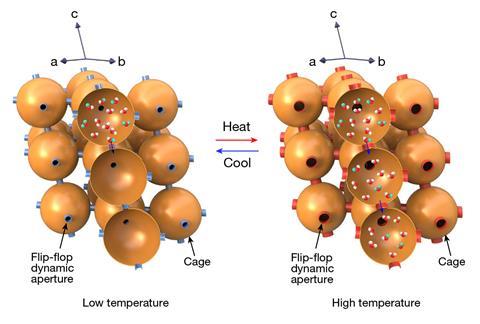 Being able to separate isotopes is vital to modern science, and this is particularly true for the isotopologues – compounds with the same chemical formula but with at least one atom having a different number of neutrons – of water. Heavy water, for example, made from deuterium (hydrogen with a neutron), is widely used as an NMR solvent, and can be used in biology to study the energy expenditure of systems. It is also used in some countries, such as India and China, as a neutron moderator in nuclear power plants.

The gauntlet of effective isotope separation was thrown down almost 100 years ago, when chemistry Nobel laureate George de Hevesy dreamed of a way ‘which would allow one to determine the fate of the individual molecules contained in the cup of tea’. Water (H2O) and heavy water (D2O) are hard to split up – differing only by the number of neutrons; they have very similar freezing points, boiling points and bond energies. This means the usual methods of separation, such as distillation and electrolysis, aren’t very efficient. However, the different isotopologues have slightly different diffusion rates, which a team led by Cheng Gu at the South China University of Technology in Guangzhou, China, and Susumu Kitagawa from Kyoto University, Japan, have pounced on. 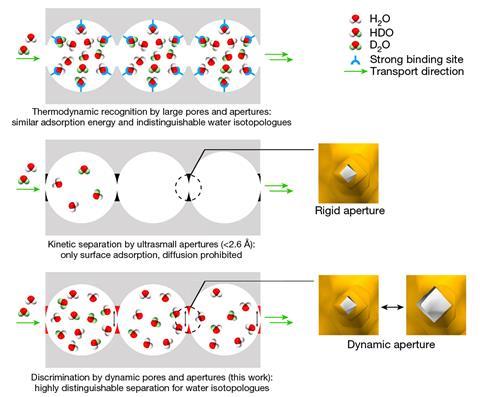 The team’s strategy was to use two copper-based MOFs, with ultra-small ‘flip-flop’ apertures, which open when heated and close when cooled, blocking movement. This effectively creates a series of diffusion-regulated gateways running through the structures. These MOFs allowed the team to amplify the differences in the diffusion rate between the different isotopologues. The team passed water vapour through the structures, with H2O being absorbed much faster through the apertures, compared with the other isotopologues, modifying the structure by slight heating and cooling. When the team tried their isolation at ranges within room temperature, with a vapour mix of 95% H2O to 5% D2O, they were able to effectively separate out the two fractions.

This isn’t the first time MOFs have been used to separate isotopes. However, the efficiency of the team’s molecular cages and ‘flip-flop’ system has led to them reporting record-breaking isotopic separation. ‘The adsorptive separation of water isotopologues in our work is substantially superior to conventional methods,’ says Kitagawa, highlighting the technique’s selectivity at room temperature. ‘We are optimistic that new materials guided by our work will be developed to separate other isotopologues.’

Juris Meija, a research officer at the National Research Council Canada in Ottawa describes the work as ‘a step toward affordable ways to generate labelled water’. However, Meija warns that the method still hasn’t been compared with the current best options, such as electrolysis or the energy-intensive multi-step Geib–Spevack process, which has been used to separate out water’s isotopologues since the 1940s, in terms of cost-effectiveness and time. ‘The application of MOFs in this work focuses on just one side of the coin – hydrogen isotopes,’ Meija adds. ‘I am surprised that little is said about the fate of oxygen isotopes, which is arguably as important as hydrogen, and whether this process can be tailored to the production of the much-coveted oxygen-17 water.’