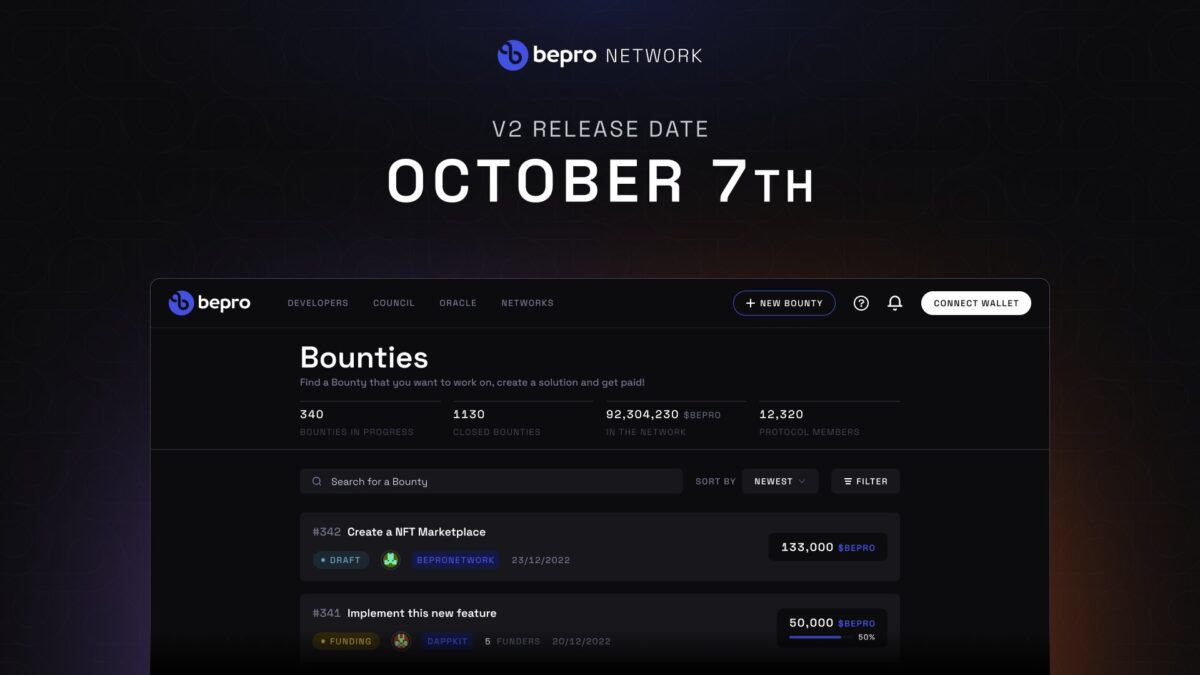 TAIKAI Labs, the venture studio behind Bepro Network, has launched its bounty network for organizations and web3 projects looking to decentralize their development.

Through a bounty network, organizations can create and manage bounties using their own token, USDC, or any other ERC-20 token as the payment currency. The protocol requires GitHub in order to function and manage pull requests, issues and branches.

Organizations, DAOs and Layer 1 & Layer 2 protocols are also able to launch a custom Bounty Network using their own branding, tokens and community.

Last month, Bepro Network announced that it closed a grant with Aurora, the EVM created by NEAR Protocol, for the development of the first bounty network on the platform.

“Having one of the top blockchain companies and EVM working directly with us is, on one side, a privilege and important validation for Bepro Network adoption. On the other hand, it’s also one important step toward the true decentralization of our product.”, says Mario Alves, CEO and co-founder of TAIKAI Labs and Bepro Network.

“We know the future of web3 is collaborative and multi-chain. Having Aurora with us on this journey is one huge step in achieving that vision”, he adds.

The network’s development DAO relies on three main stakeholders during the entire process.

The Bounty Promoter creates and defines a bounty on a network and deposits the initial reward in tokens to be distributed to developers and the curator.

Finally, Curators are protocol contributors that make a merge proposal and bounty distribution to solve the bounty.

“We firmly believe that the future of development is through collaboration and decentralization.

By leveraging smart contracts and having an inclusive stakeholder system, we allow the promotion, development and curation of bounties to be decentralized and fairly reward all the parties involved.”

After the release of the protocol’s v2, Bepro Network’s team is now focused on adding more features to improve the experience of the stakeholders on the platform.

Organizations and developers can create and discover new bounties at bepro.network.

TAIKAI Labs is the main contributor to the Bepro Network.

The development venture studio aims to create a decentralized developer hub through bounties, hackathons, educational materials and tools for the development of web3 projects.

At the moment, TAIKAI Labs has three main products: