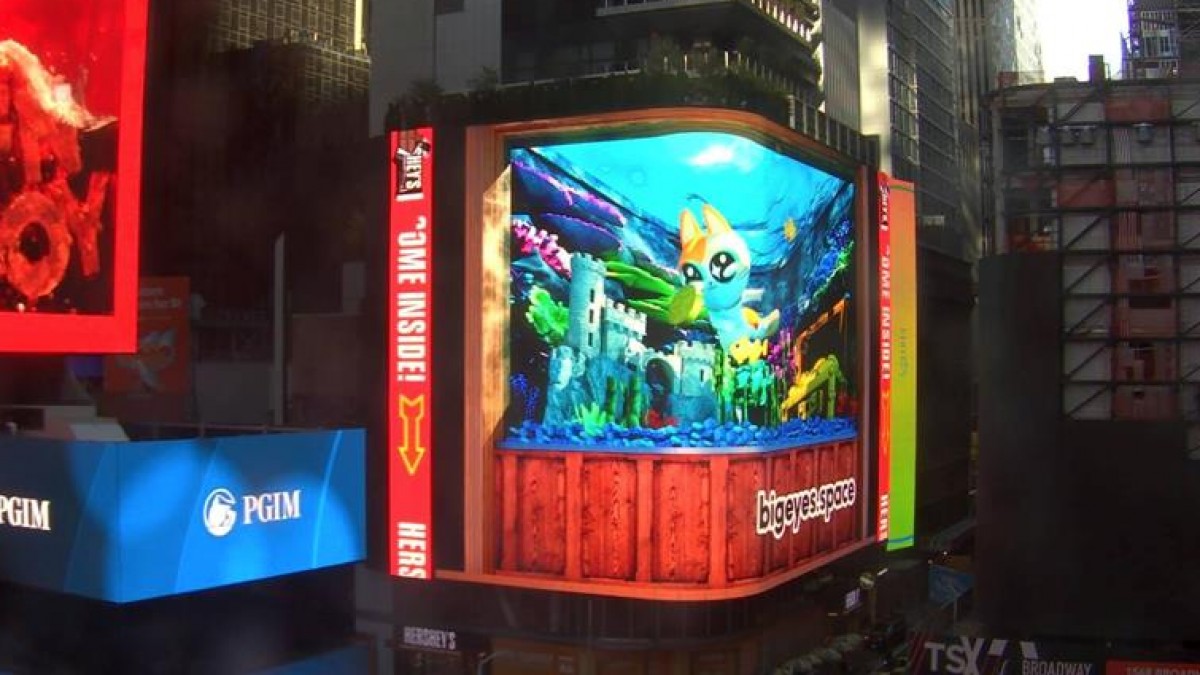 Passers-by in Time Square found themselves overlooked by two gigantic eyes on the morning of the 14th of November 2022.

These enormous, world-sinking eyes belonged to no other than the cutest cat on the planet,  Big Eyes Coin (BIG). BIG is a new meme cryptocurrency with the express goal of saving the world’s oceans for us.

Times Square, in New York, has long been known as a major commercial hub. Formed by the junction of Broadway, Seventh Avenue, and 42nd Street, Times Square is arguably the beating heart of New York.

While the likes of BMW, Amazon, and Coca-Cola have advertised on the display boards, Big Eyes Coin marks a significant change in the advertisement of digital currencies, especially meme currencies.

As more established cryptocurrencies, such as Ripple’s native token (XRP) initiate public advertising campaigns, we look at how Big Eyes Coin could make a greater impact on the mass adoption of cryptocurrencies.

Ripple is one of the market-leading blockchain platforms (ranking 7th by market capitalization), just after Binance USD (BUSD). A payment protocol that provides a real-time gross settlement system, a cryptocurrency exchange, and a remittance network, Ripple recently ventured into advertising across the London Underground in the United Kingdom.

Advertising cryptocurrencies in the UK is full of dangers, regulations, and complications. Only recently, an advertising campaign for Floki Inu (FLOKI), a meme currency, was banned from Transport For London (TfL) for allegedly misleading the public on the volatility of cryptocurrency.

In Ripple’s campaign, the messages “Crypto means business” and “The time to innovate is always now” can be read amongst pixelated skyscrapers and blue sky. However, following the crypto crash brought on by FTX’s downfall, this campaign has done little to save XRP.

If a commuter had been inspired by Ripple’s advert and invested $1000 into XRP at the start of November 2022, their investment would now be worth around $760. That is a loss of around 24%. In other words, XRP experienced a crash of $12,000,000,000 in market capitalization over a couple of days.

Presale meme currency Big Eyes Coin is making heads turn in Times Square thanks to 1) its incredible feline cuteness and 2) the message behind its advertising campaign.

A cryptocurrency based entirely on saving the world’s oceans, there is not much to dislike about this defi community token. Big Eyes Coin will be utilizing a visibility-held charity wallet that will hold 5% of all BIG upon market release. The charity wallet will then be donated to ocean sanctuaries.

If that isn’t cute, then $1000 charity donations to organizations such as Action for Child Trauma International and The Giving Block might sway you. Furthermore, the feline will be initiating an environmental-themed NFT collection aimed at spreading awareness and using a portion of its NFT tax for further charity donations.

Having almost reached $10,000,000 in presales and nearly 60,000 Twitter followers, Big Eyes Coin is making its dreams come true in the city where dreams are made of.

While the crypto sphere is often seen as a highly technical and alien field for many ordinary people, Big Eyes Coin is incredibly approachable due to its persona, look, and ‘Unconfuse Defi’ feature, which will provide tutorials and how-tos for crypto beginners.

One of the main things that unite the majority of people is cute animals and the second is a noble campaign with the express goal of helping the oceans. Although many cryptos such as Floki Inu and XRP have come and tried to make their mark in the public sphere, Big Eyes Coin has a real chance of encouraging the masses thanks to its irresistible cuteness.

Use the code BIGE249 for a BIG bonus!

For more information on the project: