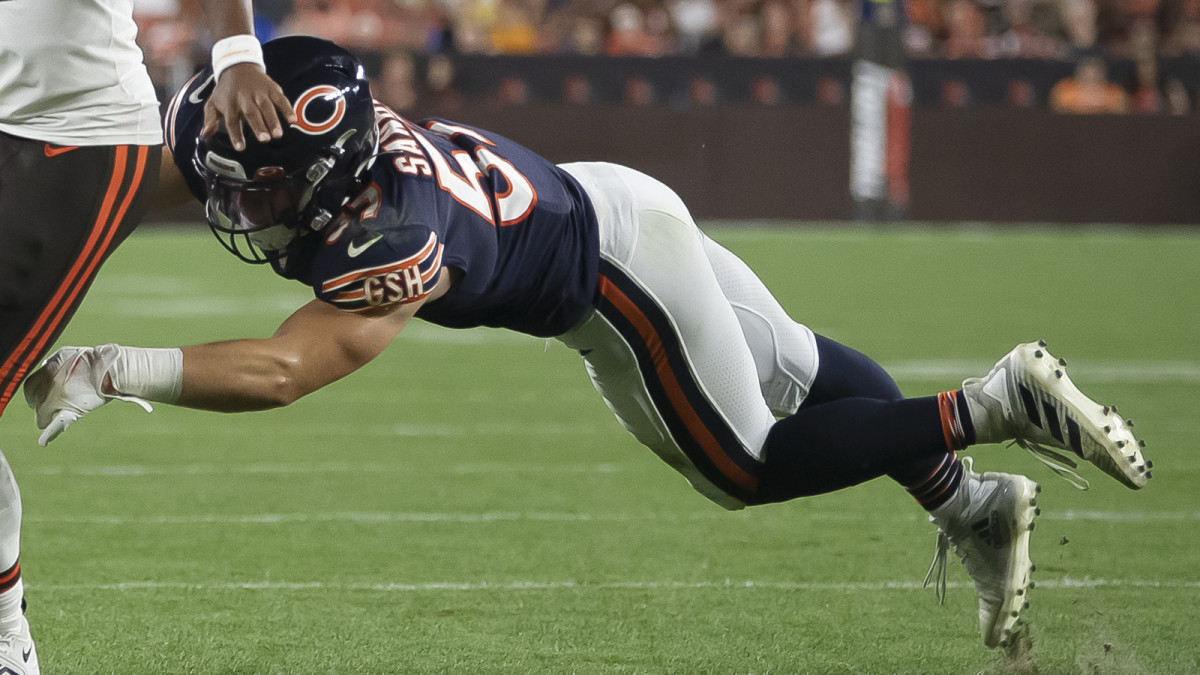 I was recently asked how you choose who to start week-to-week in IDP. I’d first recommend you read all of my IDP reports over the last two years—I’m not joking. I drop gems all over the place and it’s hard to boil down my expansive IDP knowledge. I don’t often puff my chest with any sort of seriousness, so that’s a bit tongue-in-cheek, but I’ve been playing fantasy football since 1996 and I’ve been playing IDP and dynasty IDP since 2000. Pat Tillman (RIP) was on one of my teams—that’s how far back I go—and he was a beast at the time. He was a top-five tackle guy across all positions, not just at safety. Point being, there are too many boxes rattling around this ol’ mental attic o’ mine to synthesize it all down in one sitting.

I would generally recommend that you abandon the idea of player loyalty in IDP. There are maybe six defensive linemen, 10 linebackers and 10 defensive backs that I would consider untouchable must-starts in any given year. Beyond that, you should be churning for who is producing the most points right now with a focus on what produces points in your league format while understanding tackles are more repeatable than big plays. If you’re adding the guy who had a two-INT game, try to understand that he’s probably not Deion Sanders. He probably just got lucky and you should be focusing on tackle-heavy options.

So you should not only check who’s performing well in the last few games, but also who is averaging the most over the past month or so. Between bye weeks, injuries, playing time shifts and luck of the draw, the IDP landscape is always in motion.

Shaquille Leonard went from IDP staple to afterthought to injured reserve and Zaire Franklin took his place and his stats. Blake Martinez went from LB1 to dropped by his team, back at the forefront to retired over the last three months. That’d be like if Alvin Kamara was cut a couple weeks before the season, wasn’t re-signed, played for two weeks in the middle of the season and then retired. IDP is its own animal and presents its own unique challenges.

But how do I determine who to start? Follow the points. “What have you done for me lately?” is the mantra. IDP legend Bobby Wagner was a top two or three LB for me coming into the season and I thought he would find a second wind with the Rams. He hasn’t been bad but he’s barely in the top 25, meaning he’s a LB3/flex most weeks and shouldn’t be thought of as a stud. I liked Mykal Walker at the start of the season, but it turns out Rashaan Evans was the top dog in Atlanta. Be flexible and pivot as the numbers bare out. If there’s something like a coin-flip decision when deciding who will start, I will typically choose the linebacker or defensive back playing against a good offense, since good offenses stay on the field longer, which generates more tackles and more opportunities for that particular IDP. For defensive linemen, I look at playing time and which option is playing against the offensive line that allows the most sacks. When in doubt, you can always hit me up on Twitter and check the FantasyPros IDP weekly consensus and rest-of-season rankings.

If you have any IDP waiver or lineup questions, I’m happy to help and you can contact me on Twitter @mattkdelima. Before I offer the latest IDP information, please go back and check the names on the Week 10 IDP waiver wire list.

The wide variety of IDP leagues makes it difficult to pinpoint roster percentages, so not every recommendation may be a good fit for your league. Generally, if you play in a shallow format with a total of 24 or fewer IDP starters across the league (two per team), these recommendations are at least a layer too deep for you. For specifics, it’s always best to consume a lot of IDP content to get a feel for the landscape from multiple points of view.

Note: For each player, I provide a rest of season (ROS) ranking and their percentage of defensive snaps played in their most recent game. For example, Derwin James would be a DB1+, meaning a defensive back ranked 1-12 (DB1) and the plus sign meaning on the high-end (1-4). DL3- would be a defensive lineman ranked 25-36 (DL3) and the minus means on the low-end, specifically 33-36.

DE Carlos Dunlap, Kansas City Chiefs
It’s been a renaissance year for aging pass rushers like Dunlap—assuming your league rewards enough points for sacks to keep him viable. He logged a half-sack in Week 10, giving him four on the season. He’s eking out an IDP living and worth a shot if you need a depth play. DL5-, 75%

DE Julian Okwara, Detroit Lions
I may need to adjust my rostership requirements as the defensive ends are running a bit thin. Okwara is still being groomed for more playing time, playing just about a third of the Lions’ defensive snaps. He had an impact Week 10 with three total tackles, two TFLs and two sacks. DL8, 38%

DT Zach Sieler, Miami Dolphins
Zach Sieler continues his run as my top DT add after a good, but not great Week 10 with three solos, one assist, one TFL and a FF against the Browns. DT3/DL10, 79%

Jack Sanborn, Chicago Bears
After Roquan Smith was traded to the Ravens, I wasn’t too sure who would emerge from this linebacker group besides Nicholas Morrow, who was already a relevant and mostly-rostered IDP. I speculated it could be Joe Thomas, but Sanborn has emerged over the last two weeks. He lit up the Lions in Week 10 with nine solos, three assists, two TFLs and two sacks. LB3, 90% Week 10 snaps played

Frankie Luvu, Carolina Panthers
Don’t call it a comeback. Although he’s been a bit hot and cold in recent weeks, Luvu found his groove again with eight solos, four assists, two TFLs and two sacks in Week 10 against the Falcons. LB4, 100%

Willie Gay, Kansas City Chiefs
Gay has delivered a couple solid performances since returning to the team in Week 7. In Week 10, he had his best game of the season with six solos, two assists, one TFL, one sack and a PD against the Jaguars. LB4-, 67%

Sione Takitaki, Cleveland Browns
My gut still tells me Deion Jones is the better player, but Takitaki delivered again in Week 10 against the Dolphins with eight solos, two assists and a TFL. LB6, 96%

S Damontae Kazee, Pittsburgh Steelers
With Minkah Fitzpatrick out a few weeks, Kazee is a great speculative add with big-play potential. He provided three solos, one assist, one INT and a PD in his first game filling-in as a starter. DB9, 100%

S Nick Scott, Los Angeles Rams
Despite seeing near 100% snaps on the year, Scott has failed to provide much reliable production. However, in Week 10, he had his best game with eight solos, an assist and a forced fumble. DB8+, 100%