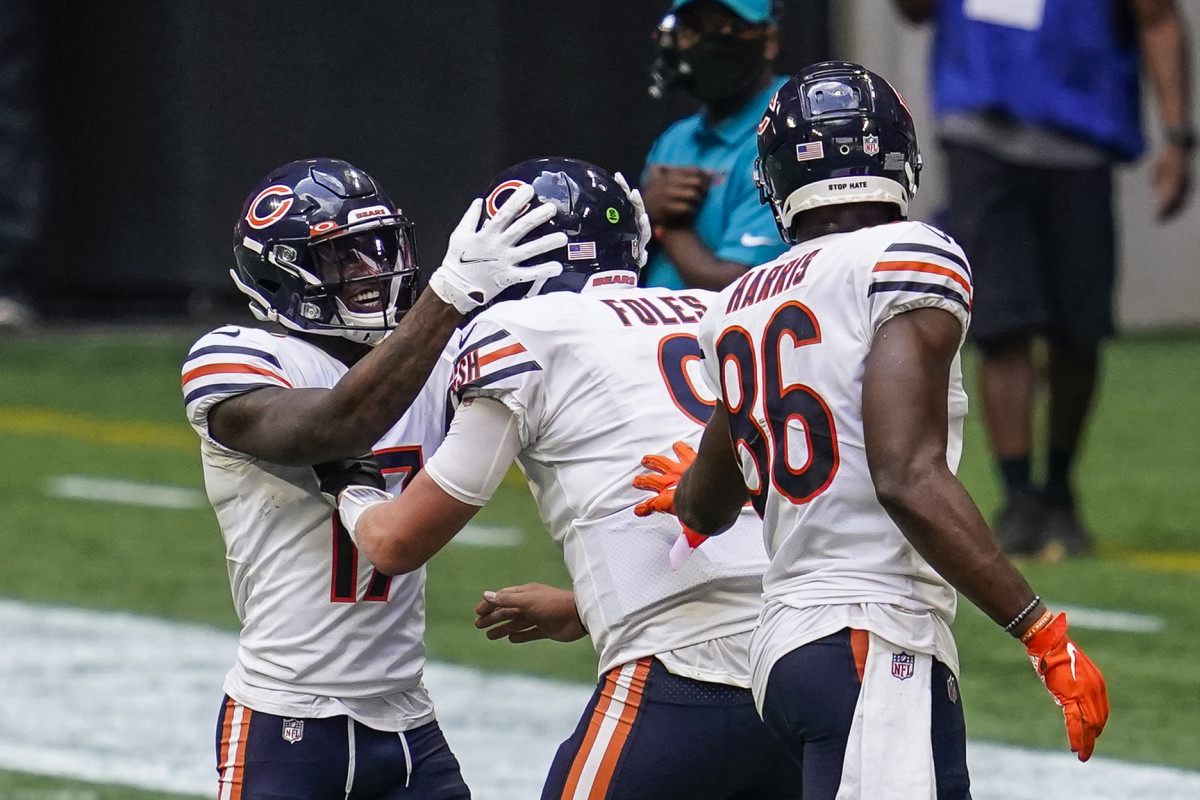 This Sunday, the Chicago Bears face the Atlanta Falcons at Mercedes-Benz Stadium. The Week 11 matchup features two teams with a combined 7-13 record.

The Bears come into this one at 3-7 and the Falcons are 4-6. Chicago is reeling after its third straight loss, a heartbreaker at home against the Detroit Lions. Meanwhile, the Falcons have had 10 days off since their loss to Carolina Panthers on the road.

The Bears and Falcons have a history that goes back some time. Their first head-to-head battle took place nearly 56 years ago on November 27, 1966.

Since then, they’ve squared off 28 times and the Bears hold a 15-13 series lead. Additionally, Chicago is outscoring Atlanta 545 to 496 in those contests.

So far, in the 28 matchups, it’s been split equally between games played in Chicago and in Atlanta. Here’s how the Bears have fared in each city.

The 29th matchup of the series will be the 15th meeting in Atlanta. This time, Justin Fields returns to his home state of Georgia.

The last time these two teams saw each other was on Sept. 27, 2020 down in Atlanta. It was Week 3 of the regular season.

It was an eerie atmosphere since the game took place in the middle of the pandemic and fans were prohibited from attending games early on. So, as a result, artificial crowd noises were pumped in.

Nevertheless, the 2-0 Chicago Bears took the field against the 0-2 Atlanta Falcons. The visitors were led by head coach Matt Nagy and quarterback Mitch Trubisky. Meanwhile, the Falcons had HC Dan Quinn and QB Matt Ryan at the helm.

The Bears’ offense got things started after a 26-yard Cordarrelle Patterson kickoff return. On the first drive of the game, they marched 47 yards on nine plays in just over four minutes. However, Cairo Santos’ 46-yard field goal attempt sailed wide left.

In response, the Falcons pounced quickly. It took them only three plays and 1:09 to go 64 yards for a score. The bulk of their yardage came on one strike to Calvin Ridley for 63 yards. On the following play, Matt Ryan found tight end Hayden Hurst for a one-yard touchdown. After Younghoe Koo missed the extra point the scoreboard read 6-0 Falcons.

On the ensuing drive, Chicago marched 58 yards on 12 plays in exactly seven minutes. However, the Bears were held out of the end zone and settled for a 35-yard field goal to cut the Falcons’ lead to 6-3.

To close out the first quarter, both teams exchanged punts after doing much of nothing offensively.

To start the second quarter, the Falcons went on a 12-play, 53 yard drive that spanned 6:18. Ultimately, the Bears’ defense held strong, which led to Koo drilling a 29-yard field goal to extend Atlanta’s lead to 9-3.

Back on offense, the Bears went three-and-out and netted -6 yards in 2:37, which resulted in them punting the ball back to Atlanta.

This is when the scoring picked up a bit. The Falcons went 62 yards on five plays in 1:17, and running back Brian Hill took it 35 yards to the house. That score extended the Falcons’ lead to 16-3.

However, the Bears responded immediately. On the ensuing drive, they stormed 75 plays on seven plays in 2:47. It was a heavy dose of Trubisky on this possession, which culminated in a two-yard touchdown pass to tight end Jimmy Graham. This cut the Falcons’ lead down to 16-10.

Both teams provided a lackluster close to the first half.

Atlanta held a 16-10 lead over Chicago at halftime.

The second half got off to a roaring and wild start. The Falcons opened up the third quarter by decimating the Bears’ defense. They went on a seven-play, 75-yard drive in just under two and a half minutes. It was the ghost of Todd Gurley past rushing it in from 10 yards out to give the Falcons a 23-10 lead.

Then, things started to get crazy. After the Falcons scored, the Bears went three plays and two yards in 1:41 before Mitch Trubisky threw a horrendous interception. However, Trubisky did end up making a touchdown-saving tackle on the play.

Typically, this would not be a huge deal. But Matt Nagy pulled the plug on Trubisky and benched him for backup Nick Foles. Even more interesting, Nagy sent offensive coordinator Bill Lazor to inform the young QB. It seemed like a quick hook, but it didn’t come as a complete surprise after an entire training camp and preseason of a QB battle between Trubisky and Foles.

Nevertheless, the Bears’ defense held the Falcons out of the end zone despite dealing with a short field. Atlanta’s four-play, one-yard drive lasted only 0:55 and resulted in just three points. Koo’s successful kick extended the Falcons’ lead 26-10.

On Foles’ first drive in at QB, he had excellent starting field position after Koo’s kickoff went out of bounds. Foles led the Bears’ offense 39 yards on eight plays in 3:35. Then, the former Super Bowl MVP dropped a dime into the hands of wide receiver Allen Robinson in the end zone. Unfortunately, Robinson got the ball snatched out of his hands by defensive back Darqueze Dennard for an interception.

The rest of the third quarter was a miserable experience as neither team could muster much offense.

The Bears started the first possession of the four quarter with 13:32 on the clock. However, both teams continued the lackluster trend that ended the third quarter.

The final play of this drive was seemingly a 17-yard touchdown pass to Anthony Miller. But after review, it was determined that Miller did not have possession of the ball, resulting in an incompletion.

In the last nine minutes of the game, the Bears’ offense started to pick up the pace, advancing 62 yards on nine plays in 2:50. Foles capped it off by connecting with Jimmy Graham for a two-yard touchdown. Though Chicago failed on the two-point try, the Falcons lead was down to 26-16.

Next, the Bears’ defense put the clamps on Atlanta’s offense. They forced a three-and-out as the Falcons could only muster one yard in one minute and punted the ball back to the Bears.

Chicago wasted little time getting back on the scoreboard. In just under a minute, they traveled 55 yards on three plays. Allen Robinson redeemed himself by hauling in a 37-yard touchdown pass from Foles. The wideout broke tackles and scampered down the far sideline to help the Bears cut the Falcons’ lead to 26-23.

Once again, Chicago’s defense generated a stop in a big moment. The Falcons lost five yards on three plays and only took 0:22 off the clock, which left an opening for a Bears’ comeback

The Bears then imposed their will and marched 44 yards in five plays. On third-and-eight, Foles connected with Anthony Miller for a 28-yard touchdown, which capped off the 2:06 drive and gave the Bears a 30-26 lead. Interestingly enough, Foles told reporters after the game that he insisted Miller “run to the L” in the end zone if the all-out blitz came. That’s exactly what happened, and it resulted in a timely touchdown.

The Falcons had the ball with 1:53 left and a chance to win the game. That opportunity lasted only four plays and saw them gain 31 yards. Bears’ safety Tashaun Gipson capped off that drive with an interception on a pass intended for Calvin Ridley.

Finally, the Bears took over to ice the game. After an 11-yard run by David Montgomery, they took three knees and came away with a 30-26 victory.

The Bears triumphed down in Atlanta. However, what did it cost? Mitch Trubisky was benched and the small sample size of Nick Foles’ “brilliance” enthralled Matt Nagy.

The NFC foes combined for 56 points in this game. It was a tale of two halves. The Falcons dominated the first half plus three minutes. Then, it was all Bears from that point on.

The Bears put up 437 yards of offense while allowing 371 on defense. Chicago had two QBs playing in this game. Here’s how they fared:

Additionally, Trubisky was the leading rusher for the Bears. He ran it once for 45 yards. David Montgomery added 45 yards as well, but it took him 14 carries.

Also, Anthony Miller had a touchdown but caught two passes on five targets for 41 yards, which included a huge drop in the end zone.

The secondary had a tough time containing Calvin Ridley, who was targeted 13 times and caught five passes for 110 yards. But the Bears held him out of the end zone, which was the key.

The win bumped the Chicago Bears’ record to 3-0 and ushered in the Nick Foles era. They lost his first start the following week to the Indianapolis Colts but won the next two against Tom Brady and Tampa Bay Buccaneers and the Carolina Panthers. However, the Bears proceeded to lose four in a row and went 2-5 with Foles as QB1. Their hot 3-0 start eventually ran its course and resulted in a 5-5 mark through 10 games.

Then, Foles suffered an injury, which marked the return of Mitch Trubisky in Week 12 following Chicago’s bye week. The Bears’ losing streak continued for two more games. At 5-7, Chicago won three in a row and was 8-7 heading into the final week of the regular season.

A win over the Green Bay Packers or a Los Angeles Rams loss to the Arizona Cardinals would secure a playoff spot. Of course, the Bears lost but did get a Cardinals’ upset win over the Rams. As a result, they backed themselves into the playoffs and grabbed the seventh seed in the NFC.

Their first draw was the New Orleans Saints on the road in the Wild Card round, and it did not go well. The infamous Javon Wims’ early drop in the end zone set the tone.

The Bears lost the game 21-9 and their lone touchdown was a 19-yard strike from Trubisky to Graham as the clock expired.

The season came to an unfortunate end: an 8-8 record followed by one-and-done in the playoffs. The Wild Card loss happened to be Trubisky’s last game in a Bears uniform. GM Ryan Pace and HC Matt Nagy were given another year and parted ways with the QB, which led to their aggressive pursuit of a QB (including Russell Wilson). Ultimately, they traded up in the draft and landed Justin Fields.

Both Nagy and Pace were fired a year later after a subpar 2021 season and mismanagement of the rookie QB.

As for the Atlanta Falcons, the loss to the Bears dropped them to 0-3. They lost their following two games and started 0-5. At this time, GM Thomas Dimitroff and HC Dan Quinn were fired. This led to defensive coordinator Raheem Morris taking over as HC.

Somehow, Atlanta went 3-1 over the next four games and found themselves 3-6 after nine games. However, the bottom fell out and they finished 1-6 in the last seven games and 4-12 overall.

In the offseason, Atlanta hired Saints executive Terry Fontenot as GM and Arthur Smith as HC. A year later, after being fired by the Bears, Ryan Pace joined the Falcons’ front office.