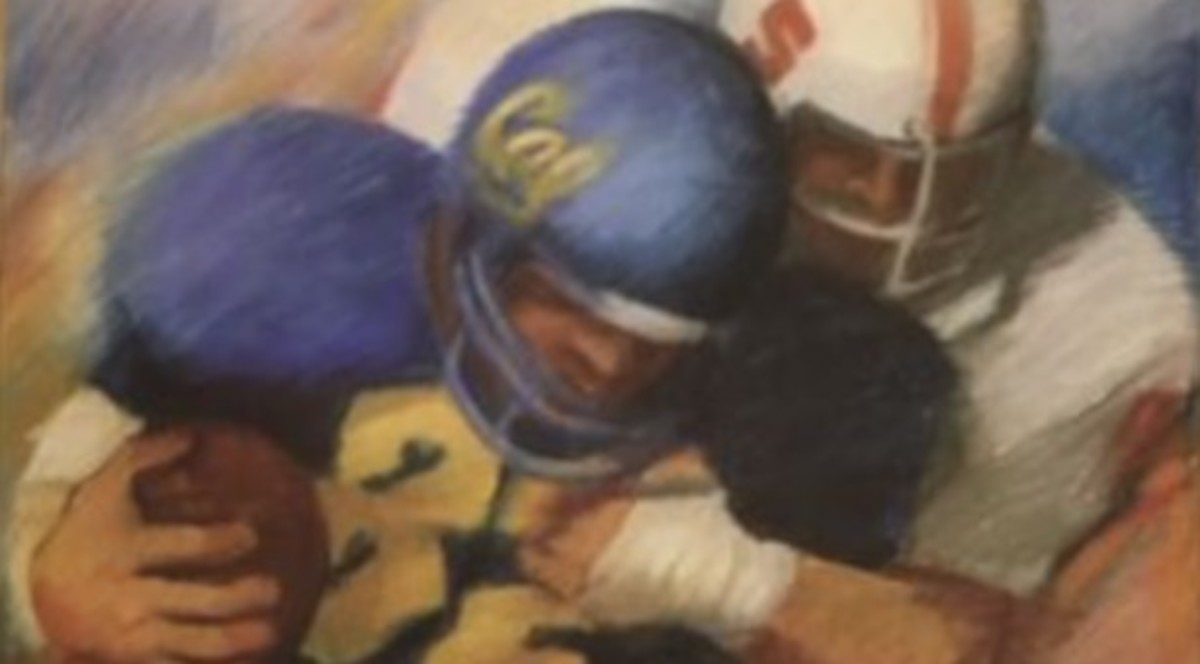 Cal used a little magic on 40th anniversary of The Play to beat Stanford 27-20 in the 125th Big Game at Memorial Stadium on Saturday.

Jaydn Ott, whose 97 rushing yards all came in the second half, went over from the 1-yard line with 58 seconds left.

Stanford’s Joshua Karty kicked a 61-yard field goal on the final play of the game before Cal fans stormed the field to celebrate winning the Big Game for the second year in a row, the third time in four seasons.

*** Cal coach Justin Wilcox talks in the video above about what derailed the Bears this season.

COIN TOSS: Cal won the toss and deferred. The Bears will kickoff and defend the south goal.

12:08 1st Q: Stanford easily knifes 75 yards through the Cal defense in six plays, with running back Mitch Leigber, the converted safety, scoring on a 1-yard plunge. The big plays were backup QB Ashton Daniels’ keeper for 43 yards to the Cal 16 and Tanner McKee’s 12-yard completion to Leigber, who made a great one-handed catch and went out of bounds at the 1-yard line. Stanford 7, Cal 0.

10:00 1st Q: Cal answers with a career-long 54-yard field goal by Dario Longhetto. It was 1 yard shy of the longest by either team in the Big Game, made by Cal’s Tom Schneider in 2006. And Longhetto’s kick would have easily been good from 55. Cal went 39 yards in seven plays, including a 24-yard pass from Jack Plummer to Jaydn Ott. Stanford 7, Cal 3.

0:33 1st Q: And the beat goes on . . .another possession, another score. For Cal, another field. This from 38 yards, capping an eight-play, 55-yard drive. Big plays were Plummers 27 yards pass to Ott and his 21-yard completion to Jeremiah Hunter, on consecutive snaps, moving the ball to the Stanford 19. Stanford 10, Cal 6.

END  OF FIRST QUARTER: Stanford 10, Cal 6. Stanford begins the second quarter with a second-and-7 from its own 24. The stats:

KAPP APPEARANCE: Cal’s 1982 team was introduced at the quarter break to lead the crowd in the “Bear Territory,” which he created. On hand is former Cal quarterback and coach Joe Kapp, who received a huge cheer while driven around the field in a cart.

2:21 2nd Q: Pummer’s 26th pass of the first half, intended for Mavin Anderson on first-and-goal from the 5, is picked off in the end zone by safety Alaka’i Gilman. Stanford 10, Cal 6.

HALFTIME: Stanford 10, Cal 6. After the team traded scores on the first four possessions of the game, neither team could add to its point total. Cal missed a great chance to take the lead when Plummer was picked off in the end zone on a first-and-goal play from the Stanford 5. Otherwise, things are pretty even:

— Both teams have 10 first downs

Cal threw the ball on its first 14 plays and 2s2 of its first 23 offensive snaps . . . against one of the worst run defenses in the country. We’re still not sure who is calling the plays in place of deposed coordinator Bill Musgrave, but this reflects a clear lack of confidence in the offensive line.

Defensively, Cal has gotten sacks from Xavier Carlton and Myles Jernigan. Stanford has not sacked Plummer.

Cal will get the ball first to open the second half.

8:31 3rd Q: Stanford goes 71 yards in 11 plays on its first possession after a Cal punt, stretching its lead when McKee throws in the flat to Elijah Higgins, who avoids or runs through three would-be tacklers to complete a 9-yard scoring play. Stanford used backup QB Ashton Daniels on three plays in the drive and each time he ran the ball, making gains of 8, 5 and 4 yards. Stanford 17, Cal 6.

END OF THIRD QUARTER: The Bears have now played seven straight quarters without an offensive touchdown. They totaled 46 yards and one first down in the their period in this one and the 125th Big Game seems to be slipping away from them.

The stats through three quarters:

Stanford has a third-and-1 play from its own 17 as the fourth quarter begins. Stanford 17, Cal 6.

11:18 4th Q: The Cal offense finally scores a touchdown – its first since the fourth quarter at USC two weeks ago. Plummer throws a quick slant pass to Monroe Young, who makes a sliding catch in the end zone. The seven-play, 47-yard scoring drive was set up by Jeremiah Hunter’s 22-yard punt return and featured three runs for 28 yards by Jaydn Ott. The Bears tried for a two-point conversion but Plummer’s pass was incomplete. Stanford 17, Cal 12.

9:54 4th Q: OK, here’s what happened: Stanford reserve QB Ashton Daniels took the ball around left end on a keeper before Cal safety Daniel Scott stripped him, forcing the fumble. Freshman CB Jeremiah Earby picked up the loose ball and ran 3 yards to the 37 when he lost it after being stripped by Daniels. But the ball bounced right into the arms of Cal linebacker Jackson Sirmon, who ran the final 37 yards for the touchdown. Cal went for 2 points again and Plummer threw over the middle to Ott for the conversion. Cal 20, Stanford 17.

Here’s some pregame reading material for you:

— Cal honors The Play with the unveiling of a statue in front of Memorial Stadium,

— Does Cal has a secret weapon today?

— Sad news on the eve of the Big Game: Dwight Garner, a participant in The Play, passes away at the age of 58

— Joe Starkey, the radio voice of Cal football for 48 seasons, set for his final Big Game

— Kevin Moen and Gary Tyrrell – bound together forever by The Play

— An oral history of The Play by the main participants, who told their story on the 10th anniversary

— Mariet Ford, a sad chapter from the story of The Play

— A Stanford beat writer answers 5 Questions about the Cardinal.

Cover photo from the front of the 1982 Big Game program