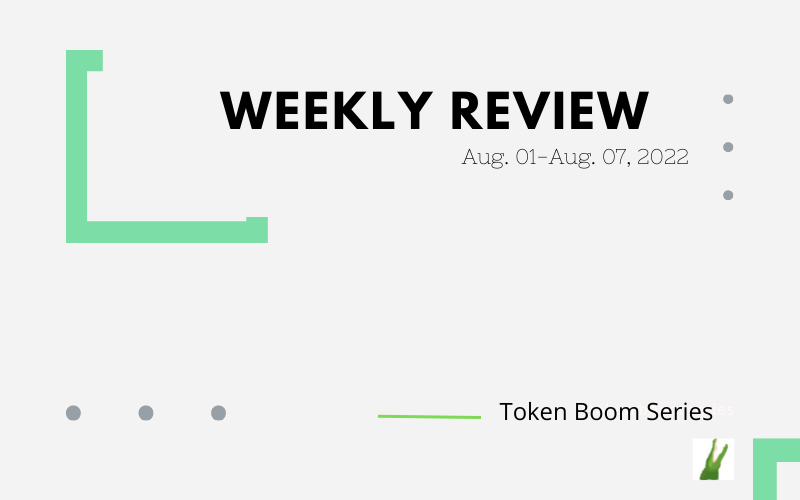 In this edition of the token boom report, the metaverse, NFTs and collectibles tokens extended gains from the last week, as market optimism continues to grow. Generally, cryptocurrency prices maintained a steady recovery with bitcoin rallying to trade above $24k while Ethereum topped $1,800.

This was partly because the July US jobs data was more than double the consensus forecast. Investors are also encouraged by the US Senate’s passing of the $750 billion inflation reduction bill.

Elsewhere, Magic Eden accelerated its strategy for the NFT space clear with the expansion to the Ethereum blockchain, essentially declaring a head-on competition with the leading NFT marketplace OpenSea.

Meta also made its long-awaited play, expanding its NFT feature on Instagram to 100 countries.

Over the last seven days, the total market value for metaverse tokens increased to $14.9 billion up from $13.5 billion registered in the previous week.

Somnium Space is a metaverse world offering NFTs and ERC-20 NFTs as part of a gaming ecosystem. Users can interact in the blockchain-based platform through gaming and virtual reality experiences that include education and entertainment.

The gaming economy is supported by the $CUBE token, which is used to facilitate transactions for various in-game items.

Last week, the toke spiked nearly 100% before pulling back substantially during the weekend.

Bloktopia is a metaverse platform built on the L2 ethereum scaling protocol Polygon. The virtual world features a skyscraper with 21 levels, created in recognition of the 21 million bitcoin.

The platform’s native token $BLOK is used to facilitate transactions. Last week, the $BLOK token rallied more than 64%, before pulling back slightly during the weekend.

The platform allows users to use decentralised apps, including DeFi, decentralised storage, eCommerce and NFTs, together with decentralised networks. One of its proven use cases is allowing users to fund Gitcoin grants directly on Twitter.

Therefore, traders could target potential rebound profits at about $1.86, or higher at $1.90. On the other hand, if the $MASK token extends the downward movement, it could find support at $1.78, or lower at $1.74.

NFTs and Collectibles tokens added to last week’s gains, rallying to $24.34 billion up from $24.32 billion as market optimism continued to build up. The total trading volume for the 7-day period edged slightly lower to $259.50 million down from $259.75 million.

The segment received a major boost after Meta rolled out NFTs in 100 countries via Instagram. Magic Eden’s highly awaited expansion to the Ethereum blockchain was announced, with the move seen as a direct challenge to OpenSea.

Flow token was among the biggest after Meta picked it to be one of the supported blockchain ecosystems via Dapper Wallet. Theta token and Boson Protocol also advanced during the week.

Flow is a proof-of-stake blockchain ecosystem that has been adopted for NFTs, DAOs and blockchain games, among others.

The $FLOW token rallied more than 70%  before pulling back slightly on Monday.

Theta token $THETA is the utility token of Theta Network. The blockchain network is built for video streaming and has an NFT platform called Theta Drop that features video NFTs.

Users can share bandwidth and computing power on a peer-to-peer basis, where the $THETA token is used to facilitate transactions.

The token advanced more than 30% last week before pulling back on Monday.

The platform is powered by $BOSON, its native token, which is also used to facilitate transactions within the platform. The $BOSON token is also used to govern the Boson Protocol ecosystem, allowing holders to vote on various matters about the project.

Last week, the $BOSON token rallied more than 50% before extending gains over the weekend. However, the token has since pulled back, creating another opportunity for a rebound.

Although total NFT sales edged slightly lower last week, some experiences significant gains both in volume and the floor price. There were also some notable decliners. The data in the tables below have been filtered to include NFT collections that registered at least 100 ETH in volume.

CryptoDickButts registered the highest increase in the floor price, which rose 90.7% in the past 7 days, also registering a 379% increase in the transaction volume according to data by RaritySniper.

The Saudis and Bored Kennel Club also made the top six, after adding 35.7% and 14%, respectively, to their floor prices.

Goblintwon was among last week’s biggest decliners, with its floor price falling 16.78%, World Ape Yacht Club, IlluminatiNFT and Mfers also registered substantial declines, while Stickmen Toys topped the list with a 32.46% decline in the floor price.

On the other hand, BEANZ lost 16.5%, despite registering a 24.6% increase in the transaction volume.

Stay up to date: