The Emblem vault aims to create a “wallet in a token”, but what is circuits of value (COVAL)?

Let’s see what we can find out and take a look at some of the circuits of value price predictions that were out there on 16 August 2022, too.

It may surprise newcomers to cryptocurrency and blockchain technology that there are many different products available, not just different cryptocurrencies, but different kinds of cryptocurrencies. There are coins, which are based on their own blockchain, and there are tokens, which are based on a blockchain that is not controlled by the originators of the token. There are also non-fungible tokens (NFTs), basically the rights to links to individual pieces of digital artwork. With such a range of crypto-commodities available to buy and sell, it can be inconvenient to trade a variety of products at the same time.

One potential solution comes in the form of the Emblem Vault. This platform is designed to help people bundle their crypto-related products into one place, called a vault or composite token, which can then be bought, sold and traded. It is, effectively, a kind of crypto zip file, which is compressed and then decompressed. While the platform has been around in one form or another for a little while now, at the time of writing (16 August 2022), these composite tokens come in the form of NFTs.

Neither Emblem Vault nor circuits of value have their own whitepapers. There is an archive of a COVAL whitepaper, but it dates from 2018. This might prove a concern for potential investors who might want to know more details of what it is they are putting their money into. Perhaps more to the point, it might also worry people who want to make use of the undeniably interesting potential usage of the Emblem Vault platform.

Because the circuits of value crypto is based on the Ethereum blockchain, it is a token, rather than a coin. You might see references to such things as the COVAL coin or a circuits of value coin price prediction, but these are, strictly, inaccurate. 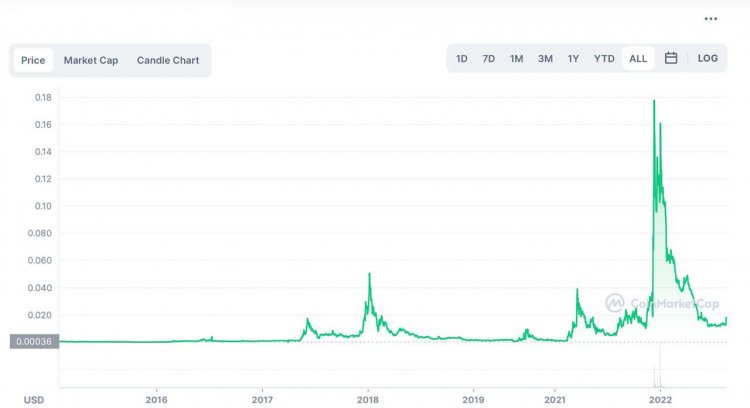 It’s now time to cast our eyes over COVAL’s price history. While past performance should never be taken as an indicator of future performance, knowing what the token has done in the past can help us get some perspective if we want to either interpret an already existing circuits of value price prediction or else make one of our own.

Circuits of value has been trading on the open market since February 2015, when it was worth about $0.0003. It basically stayed around that point before it sank to its all-time low of $0.00001037 on 31 March 2017. There were better times ahead, though, with COVAL breaking past the cent for the first time in June 2017.

It peaked at above $0.04 in January 2018 but sank back until early 2021, when the market went through a boom, as American Covid-19 stimulus cheques hit the cryptosphere. COVAL responded well to the bullish market, topping $0.02 in March. The after-effects of the Great Crypto Day Crash of 19 May 2021 saw it spend most of the rest of the year in the doldrums. Early December saw the news that COVAL was not only to be integrated with the Solana (SOL) blockchain, but also that it was to be available on the Coinbase (COIN) exchange.

At that time, there were just under 1.79 billion COVAL in circulation, representing the total supply. This gave it a market capitalisation of about $28.5m, making it the 537th largest cryptocurrency by that metric.

Let’s take a look at some of the circuits of value price predictions that were being made as of 16 August 2022. It is important to note that price forecasts, especially for something as potentially volatile as cryptocurrency, are very often wrong.

Finally, WalletInvestor made another pretty bullish circuits of value token price prediction, saying COVAL could be worth $0.0386 in August 2023 before arguing for it possibly reaching $0.131 in five years time.

When considering a COVAL token price prediction, it is important to keep in mind that cryptocurrency markets remain extremely volatile, making it difficult to accurately predict what a coin or token’s price will be in a few hours, and even harder to give long-term estimates. As such, analysts and algorithm-based forecasters can and do get their predictions wrong.