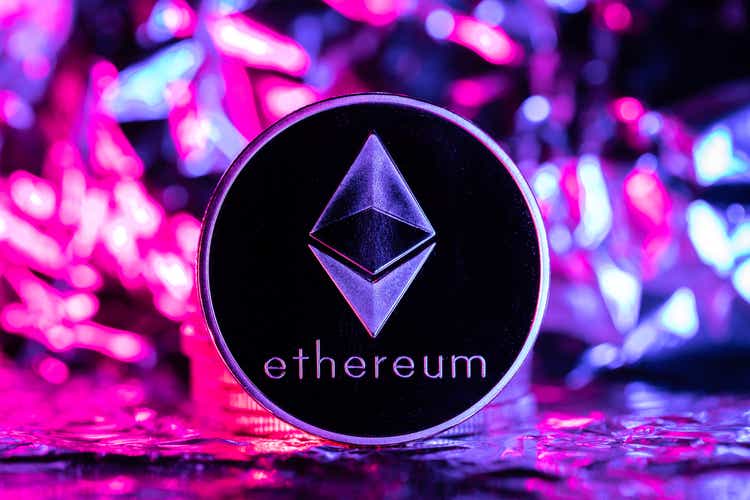 The Grayscale crypto trusts have been in freefall and we’re starting to get some theories as to why. Grayscale has over a dozen single-asset crypto funds that trade publicly over the counter. Of those 13 single-asset funds, 8 are SEC-reporting. All of them have been beat up over the last week specifically with contagion concerns following the FTX (FTT-USD) collapse being the main driver of the panic. The cryptos underlying each of these funds have performed very poorly since FTX but the Grayscale funds have done even worse with many of them down over 30%.

The significant drawdown in Grayscale fund shares over the last couple weeks has made an already large discount to net asset value in most of these funds even bigger. Grayscale’s Ethereum Trust (OTCQX:ETHE) closed Friday at a 45% discount to NAV, by far the biggest discount in the fund’s history. Grayscale’s Bitcoin Trust (OTC:GBTC) didn’t do much better, trading at roughly the same discount.

There are two core concerns that are making matters worse for the Grayscale NAV discounts. The first is much of the contagion concerns in the Grayscale funds stem from issues at Genesis – a crypto trading firm that is owned by Digital Currency Group, or DCG. Genesis is reportedly looking to raise $1 billion very quickly and some speculators are now assuming this means there will be pressure on DCG to liquidate Grayscale funds. There has even been speculation online that DCG might have to dissolve Grayscale entirely to make Genesis whole if the company can’t come up with funding it needs to apparently survive.

The Lack of Proof of Reserves

The second major concern pressuring shares is the belief by some that Grayscale may not actually have the crypto that it claims. These concerns became loud enough late last week that Grayscale published a post called “Safety, Security, and Transparency” late Friday. The post centered on these four major points that were outlined at the beginning:

Number 4 is the big one and bold is my emphasis. Two weeks ago, this would have likely been a strong enough assurance that the crypto is where Grayscale says it is and the market panic would cease. But we live in a post-FTX world now and assurances no longer cut it. The market wants proof of reserves and Grayscale isn’t offering that even as other firms like Kucoin and Binance (BNB-USD) are showing their wallet addresses publicly.

The discount to NAV problem in the Grayscale funds has been well documented. I’ve personally covered it previously here, here, and here. It was actually the core reason why I said to stay away from GBTC in late 2019. People often blame the management fees for the discount but the bigger issue is that the funds do not offer redemptions. It was viewed by many as a big deal when GBTC was trading at a 30% discount after 3 Arrows Capital had to dump its position.

In my opinion, at a NAV discount now approaching 50%, this is getting preposterous unless you believe Grayscale and/or Coinbase are both playing fast and loose with custody figures. Grayscale and DCG have both been aware of the NAV discount problem and have taken steps to try to mitigate it. Grayscale has unsuccessfully attempted to convert the fund to an ETF multiple times and is now suing the SEC for not approving the conversion of GBTC to an ETF. In another attempt to close the NAV discount, DCG started a share buyback program and is now one of the largest holders of not only GBTC, but also many of Grayscale’s other funds. And this is another cause for concern.

DCG Could Be Selling

If the rumors are true and DCG needs money to bailout Genesis, one of the easiest ways the company can raise funds without any outside help is by liquidating the Grayscale shares that the company owns on the open market. We can see in the various 10-Q filings that related parties often own a significant amount of the Grayscale shares. From the last ETHE 10-Q earlier this month, the company disclosed just under 12 million ETHE shares held by related parties:

Things get really interesting when we compare the shares held by related parties as a percentage of the shares outstanding across Grayscale’s entire portfolio of single-asset products that are SEC-reporting entities:

While we don’t yet have the Q3 filings for Grayscale’s Horizen (ZEN-USD) or Stellar (XLM-USD) funds, I think we can safely assume the ownership figures will still be high in those filings. It’s interesting to me that many of these funds have very large related party ownership percentages; some even larger than 20%. Related-party ownership of the Ethereum fund is very low by comparison. There are two potential takeaways here. First, DCG seemingly hasn’t had to defend the NAV ratio to the degree that it has had to defend it in other funds – potentially indicating organic market demand for ETHE. The other potential takeaway is that if DCG has been forced to sell Grayscale funds to raise cash, it doesn’t have as much ETHE compared to GBTC so the selling pressure shouldn’t be as extreme.

Grayscale has roughly $14 billion in crypto assets under management and the overwhelming majority of it is in BTC in ETH. That would be an immense amount of crypto flooding the market if Grayscale were indeed dissolved. But I’m just not seeing how that happens for a couple of reasons.

First, DCG can sell the Grayscale business rather than dump the assets and pay out shareholders. Frankly, I think that’s actually a fairly likely outcome if DCG is in serious desperation for cash fast and can find a buyer. The 2% management fee is a terrific business. If crypto’s valuations are near a bottom, Grayscale returns $1.3 billion in revenue in just 5 years at these coin prices:

Wouldn’t an institutional firm looking for a regulated way to enter crypto be interested in this? Perhaps a full buyout of Grayscale is possible. But I do think we have to start wondering when a much bigger institutional player will start buying the shares at the market with a discount to NAV near 50%. We already know Cathie Wood has been buying GBTC but ETHE should get eyes as well. That leads us to question number two. Why can’t Grayscale allow for redemption? It currently has no plan to do so according to the same ETHE filing referenced earlier:

From where I sit, the biggest justification for selling ETHE at a 45% discount to NAV is if you believe the Ethereum (ETH-USD) isn’t actually where Coinbase and Grayscale say it is. Unless Grayscale and/or Coinbase have lent out the assets even though there is specific verbiage that claims they haven’t, I do believe the company’s assets are secure and not at risk.

Of course, as we’ve learned this month bad acting in this industry is a non-zero percent risk. Even though I actually do believe Grayscale has what it says it has, even I’m baffled by the company’s hesitance to provide wallet addresses. That’s not helping things, but I don’t think it means the crypto isn’t where the company says it is. The real issue for DCG doesn’t appear to be Grayscale, it’s Genesis. Grayscale is just caught in the crossfire because of related party concerns.

Again, I don’t care for Grayscale’s decision not to publish wallet addresses but I very much believe Grayscale has the assets they claim to. Coinbase has vouched for them. I think rumors of Grayscale not owning the assets or loaning them out is largely FUD, “fear, uncertainty, doubt.” That said, we could still see pressure on the Grayscale shares this week. But I bought a small chunk of ETHE today. I think the discount to NAV is more an indication of how awful sentiment is in the crypto market.

The Crypto Fear and Greed Index is now 21 indicating extreme fear. I think we’re currently at the beginning of the final capitulation and it’s manifesting in the Grayscale funds at the moment. If you are a long-term believer in crypto and high on Ethereum specifically, I think the selling is way over done. I question how much selling firepower DCG even has left in ETHE. At a 45% discount to NAV, ETHE shares have an indicated Ethereum price of $605. I highly doubt Ethereum actually gets down there and I also doubt this NAV discount can get much worse unless the funds aren’t where Grayscale and Coinbase say they are. If Grayscale actually does get dissolved, I believe the net assets get sold for more than $605 and the money put into ETHE shares at this price would likely return a premium at shareholder payout. The market is in full panic mode. Buy the fear.