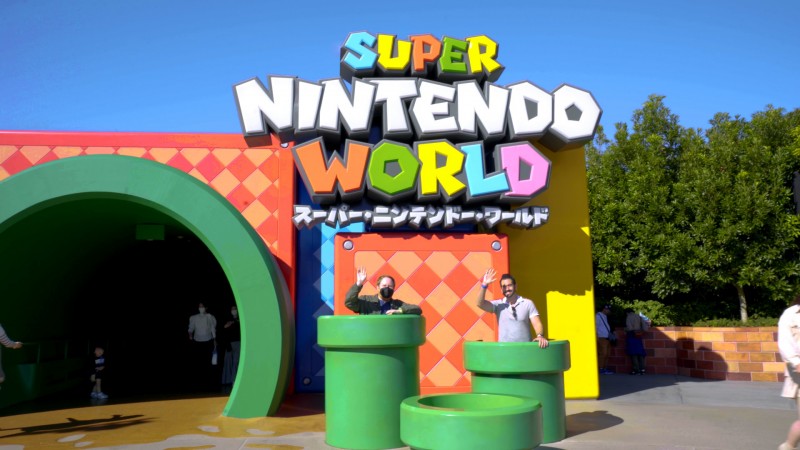 We recently traveled to Osaka, Japan, for our Street Fighter 6 cover story. While we were in the city, Game Informer video editor Alex Van Aken and I thought it would be a great idea to take advantage of our proximity to Universal Studios Japan to visit Super Nintendo World. Like you, we saw the tour provided by the legendary Shigeru Miyamoto, but we needed to see it for ourselves. And to be quite frank, we are so glad that we did.

First, we had to reserve a time to enter that particular area of the park. I was unable to do that before the day of our arrival, but I was able to snag an early afternoon time, giving us some time to scope out the rest of the park. After hopping on the Spider-Man ride and grabbing a bite to eat in the Jaws area of the park, our time to enter Super Nintendo World finally rolled around.

After scanning the Universal Studios Japan app to enter, we were able to purchase the wristbands you’ve undoubtedly seen on past promotional material. These wristbands allow you to participate in various games around the park. If you’re on the fence about grabbing one as I was, I highly recommend picking it up, as many of the park’s activities are locked behind these.

I chose the Mario band, while Alex picked up the Luigi band. After slapping them on our wrists, we registered them to the Universal Studios Japan app, which tracks our progress as we enjoy the various games and activities. Everything from blocks you hit around the area to minigames you participate in (more on that later) gets added to your profile.

After we got that all squared away, it was time to enter the park. After a brief photo op with the pipes outside the main entrance, Alex and I headed inside through the massive warp pipe. Peach’s Castle was the literal light at the end of the tunnel. As you’d imagine, the castle theme from Super Mario 64 plays. On one side, you have the painting for Bob-omb Battlefield, while the other features a picture for Tiny-Huge Island. As you look at them from different angles, however, an image of Bowser Jr. flashes within the frame, hinting at what’s to come later in the park.

Emerging from Peach’s Castle in Super Nintendo World is a magical experience, as you immediately experience sensory overload in the best way. Immediately, I felt like I was in a Mario video game. Off to the left are Bowser’s Castle, an underground area, and a few minigames. There’s Yoshi’s Snack Island and the main area’s shop on the right. Straightaway center, you have Mount Beanpole’s Yoshi ride, then down below, you have a photo opp area where I found Mario, Luigi, and Toad, as well as Kinopio’s Cafe (Toad’s name in Japan is Kinopio).

I decided to explore a little bit before jumping into anything. The park is a relatively small corner of the greater Universal Studios Japan, but it’s dense and detailed. I wander around with my eyes scanning every single detail. As good as everything looks in still images, it’s even more remarkable in motion. The coins spin, the animatronic characters move realistically, and the speakers pump universally delightful versions of recognizable songs.

After hitting all the blocks I can and registering the coins in the Universal Studios Japan Super Nintendo World app, I finally decide to get on a ride. There are plenty of things for which to wait in line at Super Nintendo World, but only two actual rides. The ride with the shorter line was Yoshi’s Adventure. After serpentining through a Yoshi’s Island-themed queue, I finally make it to the front. I board the slow-moving Yoshi, taking me through a tour of the highest parts of the park.

Yoshi’s Adventure is anything but a thrill ride. In fact, it’s barely a step above a people-mover. But with some fun interactive elements and impressive animatronic-based scenes starring the likes of Kamek, Baby Mario, Thwomp, and, yes, myriad Yoshis, I was glad I went on the ride. Still, it was probably my least favorite attraction of the Super Nintendo World experience.

After exiting the ride, I’m starting to get hungry. The wait time for Kinnopio’s Cafe was three hours when I went into the Yoshi ride, but I checked with the attendant, and she gave me a 40-minute estimate. Immediately, we jumped in line to sample the best food the Mushroom Kingdom has to offer. While in line, we could play Toad’s Small and Big Box minigame with our wristbands and watch as the head chef Toad welcomes us. The menu is full of items inspired by Mario games, including food shaped like Super Mushrooms, Super Stars, Bowser’s Shell, and plenty more.

We order a healthy helping of food from Toad, get our drinks, and take a seat in the dining room. As we sit, mini action sequences happen in the “windows” of the dining room. We see Luigi running around aimlessly, the Toads scrambling, and other familiar faces going about their days, all set to the deep well of Mario music. However, the action “outside” soon darkens, and Bowser’s airship arrives, scaring everyone away as the thunderstorm approaches.

The food arrived shortly after, and we dug in after a brief photoshoot. We ordered three dishes and two desserts – we tried to order a third dessert, but the cafe was sold out of Peach’s Cake. We ordered the Super Mushroom Pizza Bowl with Mushroom Tomato Sauce, the Teriyaki Chicken with Super Star Rice, and the King Bowser’s Hamburger Steak with Bread. We rounded out our meal with the Block Tiramisu and Goal Pole Cake. The main course dishes were above average as far as theme-park food typically runs, but the desserts were terrific.

We decided we needed to finally brave the longest line of the day with Mario Kart: Koopa’s Challenge. We headed over to Bowser’s Castle and saw the “single rider” line was a mere 45 minutes. We hopped in that line, climbed a flight of stairs leading up to a massive statue of Bowser himself, then began descending into the depths of King Koopa’s dungeon.

Once we reached the bottom, we were handed Mario hats. Before boarding the ride, they gave us a visor to click into the Mario hat. We boarded our “karts” with three other parkgoers, and we were whisked off to the starting line of a Mario Kart race. The “race” is more of a thrilling minigame, as visors activate and augmented reality characters appear before your eyes. The kart is pulling you all over the place, spinning out, fishtailing, and boosting you in various directions and through several biomes, but the AR visor lets you use the built-in steering wheel and triggers to blast shells at passing characters. Finding myself in the middle of a Mario Kart ride was fun, thrilling, and almost emotional. It stands out as a highlight of the trip to Super Nintendo World.

After leaving the Mario Kart ride, the sun was beginning to set, and we realized we had one major thing we needed to do before it was time to go: beat the final boss. Bowser Jr. serves as a boss battle you can take part in, but first, you need to collect three of the five keys with your wristband. You do this by completing minigames within Super Nintendo World. These minigames range from a timing activity where you need to hit a POW Block at the right time for a shell to pop out of a pipe and collect the coin to one where you must spin a hand-crank fast enough to rotate a platform and make a Goomba fall off to reveal the key.

The two minigames that most stood out involve turning off alarm clocks before a giant piranha plant wakes up and a puzzle game where you flip tiles to earn a key. However, this stretch’s most incredible experience came from going into the underground area. As we entered, everything was appropriately proportioned, but by the time we went through the meandering hallways, we had become mini. Blocks, enemies, and even symbols on the wall were massive compared to how they were outside. Not only that, but it was done in such a way that it happened so gradually that you almost felt as though you were shrinking with every step you took. It’s an awesome effect that cannot be accurately conveyed through video or photos.

With keys in tow, we walked up to Bowser Jr.’s stronghold. After a stroll through his workshop, we finally came face-to-face with the big brat himself. The battle plays out almost like an EyeToy or Kinect game, with our silhouettes appearing on a screen in front of us. Cameras behind each of the eight players in the session have their shadows cast on the screen and must react to various objects and enemies popping up. For instance, as a Bullet Bill swoops by, you must duck. If you don’t and you get hit, you can turn mini. If a power-up appears above you, you can jump up to grab it. Bowser Jr. will fly by, and if the team of players can deflect enough fireballs and other projectiles his way, it’s a wrap on his reign of terror.

After finishing off Bowser Jr., all we had left to do was a trip to the slot machine on our way out. Super Nintendo World doesn’t have all the pieces you’d expect from a terrific amusement park, but it’s far greater than the sum of its parts. The immersion, the Easter eggs, the atmosphere – it all combines to create a magical experience. I highly encourage anyone with the opportunity to visit Super Nintendo World to do so.

To hear more about Brian and Alex’s trip to Super Nintendo World, you can listen to them talk about it on a recent episode of the All Things Nintendo podcast. Listen right here or on your podcast platform of choice!