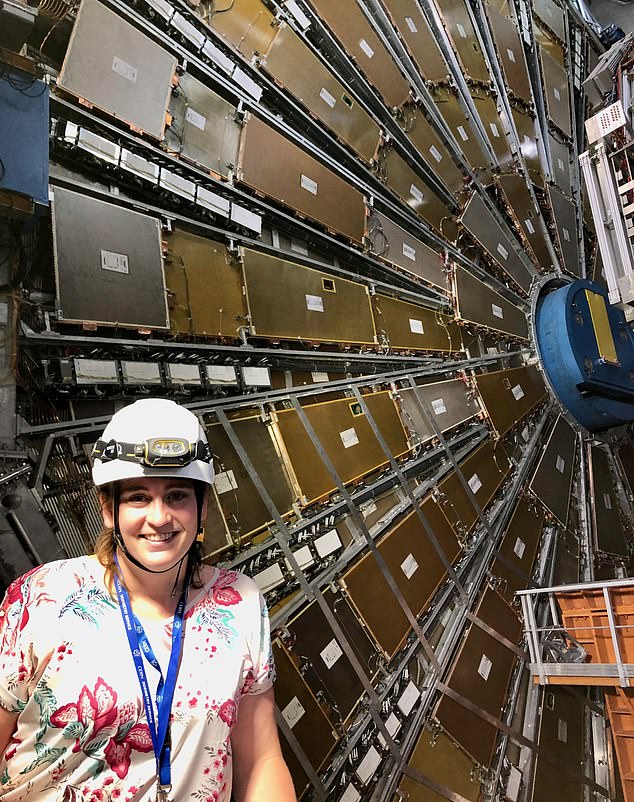 Scientists at CERN are slamming protons together at an unprecedented energy level in order to unlock our world’s most enduring mysteries – including dark matter, which we know little about despite it accounting for 26.8 percent of all mass and energy.

The Large Hadron Collider (LHC), which restarted for its third run after undergoing extensive upgrades, shattered energy records when it was turned back on today – enabling physicists to further study the Higgs Boson and what this particle’s decay can reveal about the rest of the universe.

By colliding proton beams together at 13.6 teraelectronvolts, the LHC broke a record; to give a sense of the power being unleashed at the particle collider located 300 feet underground, one tera electron volt is equivalent to 1,000,000,000,000 electron volts.

Scroll down for video

CERN physicist Katharine Leney, pictured above, works at the ATLAS Experiment and is an assistant research professor at Southern Methodist University in Dallas, Texas. She spoke with DailyMail.com about her work and hope for the future

‘We think [dark matter] has mass but we don’t know anything about it,’ CERN physicist Katharine Leney, who works on the ATLAS Experiment and is a research assistant professor at Southern Methodist University in Dallas, Texas, told DailyMail.com in an interview.

‘We think that maybe Higgs Boson may be interacting with it – we don’t know yet.’

Despite all of our scientific advancements, we only know about visible matter – everything that we can see – which amounts to just 4.9 percent of the entire universe. Dark energy, which we know even less about, accounts for 68.3 percent of the universe.

‘Because these dark matter particles – if they weren’t interacting in any other way with other particles, they wouldn’t interact with our detector,’ Leney explained in the interview. 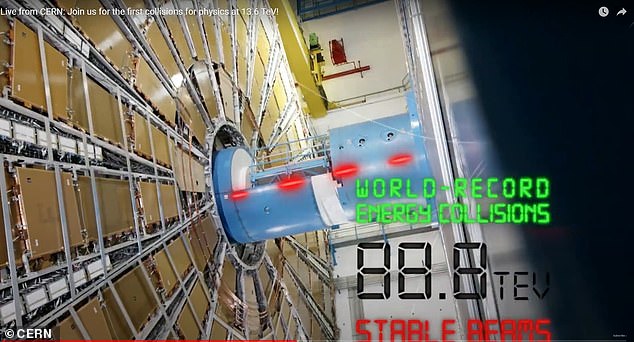 The LHC broke a record when it hit 13.6 teraelectronvolts, which is the equivalent of 13.6 trillion electron volts. Pictured above is a still from the official restart video for run three 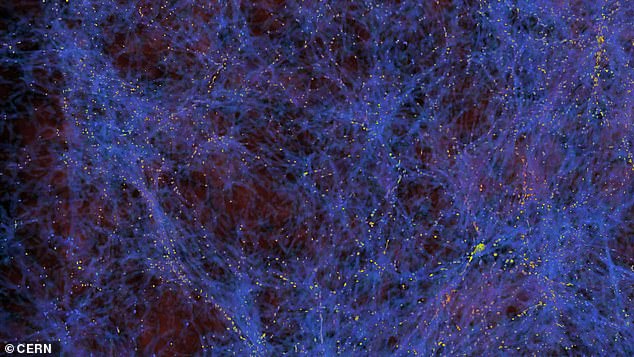 Despite accounting for 26.8 percent of all mass and energy, we know very little about dark matter. Pictured is a visual representation of dark matter in the universe 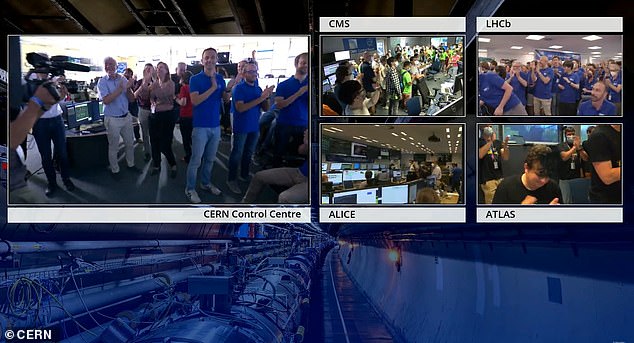 During its shutdown, the Large Hadron Collider and all its accompanying detectors have received major upgrades. Pictured above, scientists celebrate the start of run three 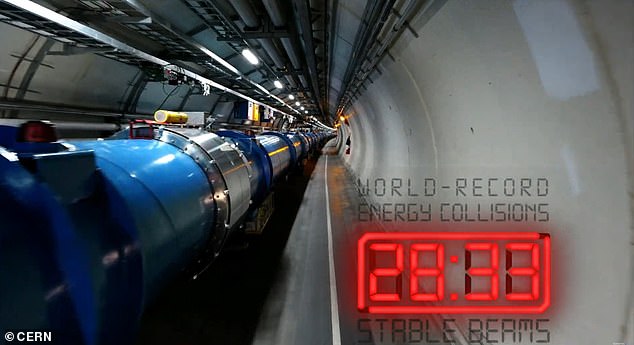 Scientists will be analyzing how the Higgs Boson interacts with other particles. Pictured above is a portion of the Large Hadron Collider

‘The only way that we can tell that they’re there is to look for the absence of their presence in the detector.’

Despite its name, dark matter doesn’t have any sinister or unsavory connotation. It’s simply called that because it doesn’t seem to interact with photons — and those particles are pockets of light – and it can’t be seen.

If the Higgs Boson interacted with dark matter, it would decay in a different way, so that scientists could then study what took place.

The Higgs boson is an elementary particle – one of the building blocks of the universe according to the Standard Model of particle physics.

It was named after physicist Peter Higgs as part of a mechanism that explains why particles have mass.

According to the Standard Model our universe is made of 12 matter particles – including six quarks and six leptons.

It also has four forces – gravity, electromagnetism, strong and weak.

Each force has a corresponding carrier particle known as a boson that acts on the matter.

The theory went that the Higgs boson was responsible for transferring mass.

It was first proposed in 1964 and wasn’t discovered until 2012  – during a run of the Large Hadron Collider.

The discovery was significant as if it had been shown not to exist then it would have meant tearing up the Standard Model and going back to the drawing board.

‘If we put energy in but we don’t see enough stuff coming out, we can say that there must be something else here in order to not violate these energy conservation laws – and that then could be something like dark matter.’

Leney is specifically studying how the Higgs Boson interacts with itself and how it generates mass, which can be thought of as key piece of the puzzle that scientists are putting together.

This work will give them insights into topics including the formation of the universe and even its ultimate fate.

Ten years ago, scientists at CERN announced that they’d proven the existence of the Higgs Boson.

That particle, first proposed in the 1960s by physicist Peter Higgs, is essentially the physical manifestation of the Higgs Field.

‘That field permeates the entire universe – anything that has mass is interacting with the Higgs Boson,’ Leney said.

In the time since its last run ended several years ago, all of the equipment at CERN, including its massive four detectors, has been upgraded. In addition, the scientists will be able to analyze a voluminous amount of data with the help of high-tech computing and major software improvements.

‘Machine learning has been a game changer for us in the last few years, Leney said.

‘When we read the data off the detector we use machine learning techniques to improve how well we can identify different types of particles and then we use it when we are actually doing the analyses as well to separate what we’re doing from other physics processes.’

‘I work on searches for producing pairs of Higgs Bosons, which is a thousand times rarer than producing a single Higgs Boson,’ she explained, adding that machine learning has helped scientists far exceed projections of where they thought they’d be several years ago.

‘We aim to be delivering 1.6 billion proton-proton collisions per second’ for the ATLAS and CMS experiments, CERN’s head of accelerators and technology Mike Lamont told AFP.

‘We’re all very much hoping that there is something beyond the Standard Model. We’re really just getting started on this work,’ Leney emphasized to Daily Mail.