If 2021 was the coming out party for the cryptocurrency industry, then 2022 has been the nasty hangover. Last year, the combined value of all cryptocurrencies exceeded $2.9 trillion, but that figure has crashed to just $800 billion as of this writing.

Many investors would say that’s proof Shiba Inu was merely a vehicle for speculation, but could the token find new use cases to potentially increase its value? If so, might another meteoric rise be in the cards, from its current price of $0.000008 to $1 next year?

Faith in cryptocurrency has plummeted

A series of high-profile crypto collapses this year has eroded investors’ faith even in the leading tokens like Bitcoin and Ethereum, which have each declined in price by more than 75% from their all-time highs.

The latest casualty was one of the world’s largest cryptocurrency exchanges, FTX, which filed for Chapter 11 bankruptcy in spectacular fashion earlier in November. At this stage, it appears the company owes its creditors (most of whom are its users), at least $3 billion, and it’s unlikely any of those account holders will see all of their money again.

But FTX followed several other enormous failures including Three Arrows Capital, a crypto hedge fund that was once managing $10 billion. It filed for bankruptcy in July and triggered a series of knock-on effects that took down Voyager Digital, a crypto brokerage house that loaned Three Arrows as much as $670 million that it couldn’t recover.

However, those stories pale in comparison to the failure of the TerraUSD stablecoin, which wiped out an estimated $60 billion in value when it lost its peg to the U.S. dollar back in May.

All of those disasters have one thing in common: Everyday cryptocurrency investors stood to lose the most money, which is something government regulation tends to prevent in traditional finance. It’s unclear how likely those investors are to return to cryptocurrency markets in the future.

Shiba Inu faces a series of other challenges

The broader crypto market turmoil has certainly impacted Shiba Inu. The token was trading at $0.000014 just a month ago, so it has lost about 40% of its value since the FTX scandal unfolded. But Shiba Inu also can’t seem to gain traction as a payment mechanism despite the best efforts of its community, which means everyday consumers have little reason to buy tokens.

Right now, just 659 merchants accept the token as payment for goods and services, and if that number fails to meaningfully grow, Shiba Inu will be destined to remain on the fringes of the financial world.

Shiba Inu developers are now building new technologies like a complete metaverse to help give the token some utility. The Shiba Inu isn’t live just yet, but some new concept images were released this month, which generated some buzz across social media. When it does eventually launch, owners of virtual land inside the digital world will be able to rename their plots by paying a fee in Shiba Inu tokens.

Those tokens will be burned — or removed from circulation forever — which will result in an organic, proportionate increase in the price per Shiba Inu token. The burn mechanism is a feature of many Shiba Inu-themed projects, including the Shiba Coffee Company, aimed at reducing the token’s enormous supply of 589 trillion units. 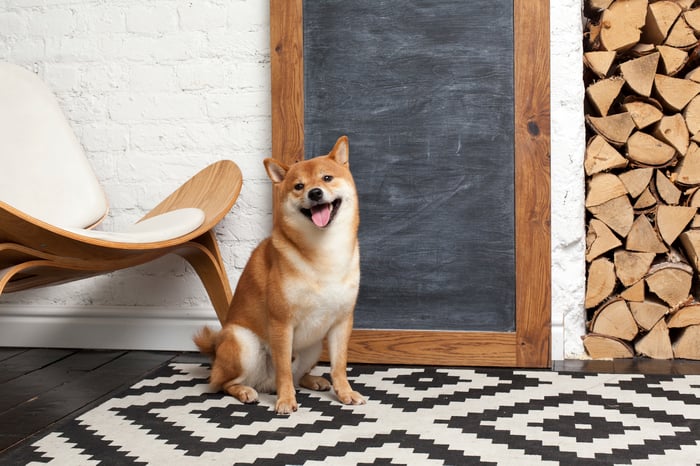 The burn is the only path to $1 for Shiba Inu

With 589 trillion tokens in circulation, a price of $1 per token would mean Shiba Inu’s total value would rise to $589 trillion, making it the most valuable asset on Earth by a wide margin. Unfortunately, not even the most optimistic punters believe that’s realistic, and therefore, the only way to reach that price is to reduce supply.

It’s unlikely that novelties like the metaverse will result in the 99.99998% reduction in supply Shiba Inu would need to mathematically send the price to $1. Nor will relying on the community’s generosity to send their tokens to dead wallets to remove them from circulation.

In fact, just 30 million tokens have been burned in the last 24 hours (as of this writing). If that pace remains constant, just 10.9 billion tokens would be burned each year, meaning it would take over 64,000 years to reduce supply enough for Shiba Inu to reach $1. So it

Therefore, investors hoping to see Shiba Inu soar to $1 in 2023 — or in this lifetime — will probably be disappointed. The burn rate would need to accelerate by an outrageous amount to make it happen.