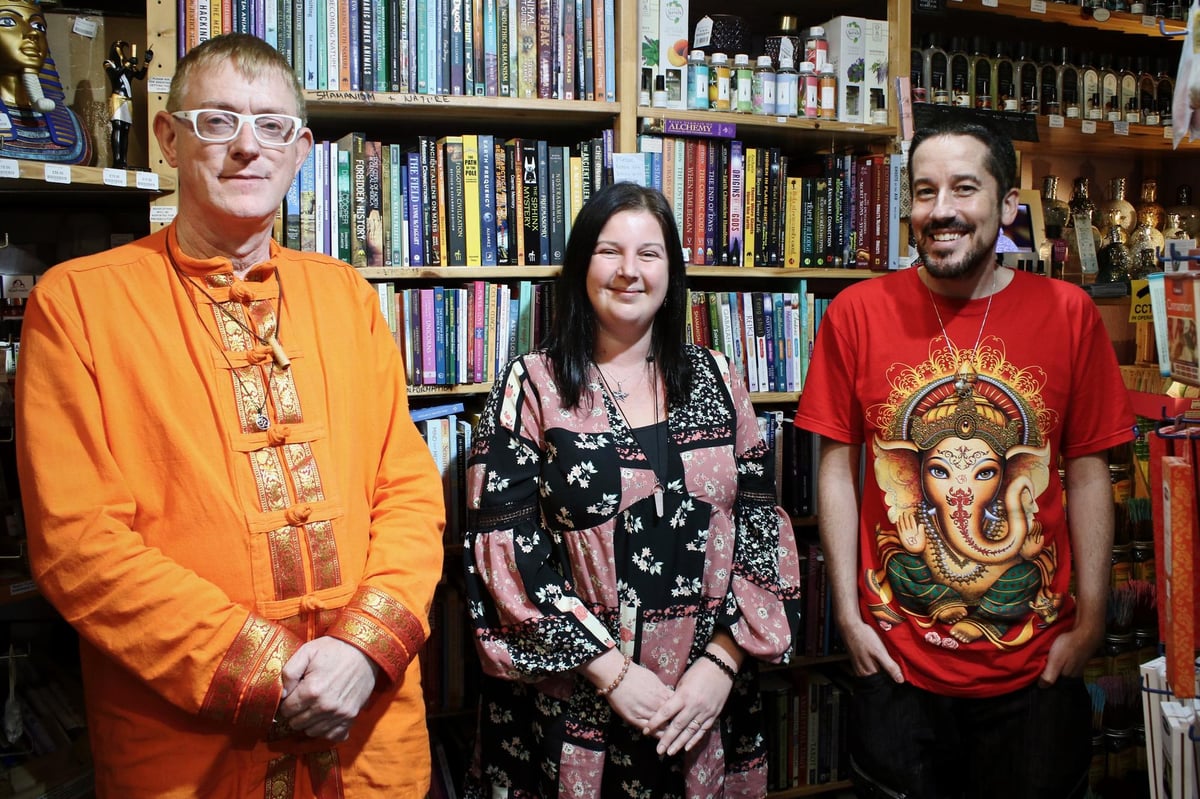 “So many people really appreciate the shop,” says Jonny Kudibal who has run the business since 2003.

Calm, warm, and open-handed, Jonny tells his curious story among crystals and tarot cards, oils and incense, charms and tools of ritual, the soft swirl of pan pipes a backdrop to his tale.

“I would say I’m more like a free spirit. So for me, I take a bit of what I feel is right, spiritually, so it might be some Buddhist principles, some Native American, Celtic, you know, this is what they tend to call New Age, esoteri – alternative ways that you create on your own.”

His lifestyle focus on what he calls “alternative ways” is certainly diverse. Would he call it a belief system?

“There is obviously a belief system there, because reincarnation comes into it, which is a massive subject in itself. What do you do in-between your lifetimes. Do you look back at what you’ve done? And what you need to do going forward.”

Started in 2003 on a market stall, Curious Goods is now a deep-rooted destination outlet, located in The Shambles.

Jonny’s shop seems a success, free from a sense of hard-sell.

“Everyone’s worked here for over ten years, he said.

“We’ve all got the right kind of intention. It’s not necessarily profit focussed. You have to earn a living, but it’s more about what we’re trying to achieve to make a difference. You’ve got to go with what you feel. We never push anything on anyone.”

And where did all this begin? “I was getting stomach issues when I was about 21. I’d had glandular fever as well. I was feeling drained. So I looked into alternative therapies, went to reflexology, had acupuncture, read stuff on how to use your mind to get yourself well again.”

And it worked? “Absolutely, yeah.”

Would you say there’s positive thinking here? “You’ve got to believe it, but it’s also got to be the right reason. A lot of people in this field call it a vibration. So you can’t do it in a false way, you’ve got to feel it.

Radio Jonny is certainly a fascinating listen. He tells of angel guides, automatic writing channelled from dead relatives, Buddhist principles of the higher self, and how the shop has become a gentle help centre for troubled folk.

“We just try and do our bit. One of the most common ones are relationship breakdowns. So we try and get them to focus on going forward.”

Jonny’s delivery is one of integrity and soft humour, with a subtle hint of humility. He tells a story of being at Morrison’s without a coin for a trolley, only to receive a silent message to turn around and “walk down that way… and I found a pound coin on the ground.”

It’s hard not to smile at such a story, but it’s twice as hard not to see his glow of life optimism. He smiles as we walk through the shop past waving cats, bundles of sage, and pagan figurines, towards a wall of books that tell of everything from spells to feng shui. This is where we meet David Croft, the psychic.

“My area is past-life regressions, reincarnation, and the psychic side. Past-life regression is where you have someone, preferably someone who doesn’t believe in it… and basically, lay them down… and take them back to a previous lifetime. They can actually hear, smell, see…”

What sort of things do people see? “One was where a guy… and I was struggling to pinpoint the timing. And then I started working on uniforms, and I realised it was a Roundhead. So I knew the time period then… He was a child, it turned out. And he’d been scrumping.”

David smirks. “When he came back round to this life, he was checking his legs because he’d actually fell out of the tree, and he could feel it.

“And then he said, now he knows why he doesn’t like apples in this life – he just hates apples!”

At the shop counter

Laughter ripples around Curious Goods. Does the process ever get scary?

“I actually do a couple of tests, to make sure they understand that they can stop at any moment. If they think I’m in control, then I won’t do it. Because obviously, they’re not where they should be. There was one case where I was getting a strong feeling that there was a problem with fire. At the point they were going to come back, they were about to pass. So I just stopped it. Because, they’d feel it.”

And how would you describe your role as a psychic? “Picking up things, helping people. We do a lot of that in the shop actually, people coming in and you give a message to them perhaps, it’s a kind of help.”

What do you read from the person stood in front of you right now? “When you first came in I didn’t associate you with you, but I did pick up creativity. And I also picked up that you’re searching for something…”

And your advice would be? “Follow your intuition. Because at times you over-ride something that you’ve felt. Sometimes you bring in logic a little bit too severe. We call it A.P… analysis paralysis.”

The sound of laughter hides how uncomfortably accurate this feels. A smiling Jonny appears by the wall of tarot cards with a lady. This is Tamsin Knowles, “the resident witch”.

“My focus is on witchcraft and Wicca, helping people with that and finding the path. Helping them out with spells and things. We’re seeing a lot of young people coming in and it’s fantastic. They’re opening up to it, and finding the magic in their lives.

“It feels like a big call has gone out, spiritually and they’ve heard this call. And a part of their soul has said ‘Hmmm, that sounds interesting’. Also the internet has a bit to do with it. TikTok is a big thing at the moment, especially for witchcraft.”

Tamsin frowns. “But there’s so much misinformation on there, people just picking a book up and thinking they can teach other people things. It shouldn’t always be like that. So it’s nice that they can come in here and they can ask.”

Tamsin tells of starting out in witchcraft sparked by her sister. “I’d say from the age of probably fourteen is when I really got interested in it, and I’ve just gone with it. It’s been a part of my life since then.”

How did people react? “When I was younger, people misinterpreted what it means. If you wear a pentacle, they confuse it sometimes with Satanism. They think you’re evil. They think you’re worshipping Satan, which pagans don’t actually believe in.”

“To be a witch is to see the magic in everything, in everyday things. When it’s raining outside it’s refreshing, it’s cleansing.”

Do people ask you for spells? “I get a lot of love questions from people, wanting a love spell. And I make it very clear that you cannot cast a spell on other people. You cannot change someone else’s free-will. I abide by the Wiccan Rede, which is ‘Harm none through word, thought and deed’. So whenever people come in and say I need a love spell, I always tell them to do the love spell on themselves, so actually make a spell to love yourself. It begins with you.”