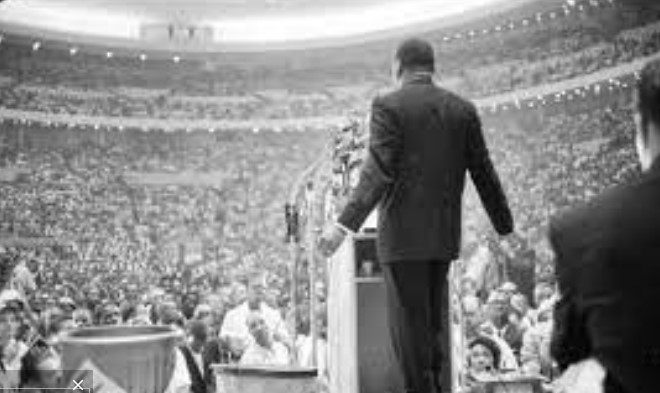 By Aswad Walker,
The Defender Network

The Rev. Dr. Martin Luther King Jr. was a prolific speaker, meaning he has a litany of speeches given over his years in the public eye that go far beyond the many sermons he preached. Not only that, MLK wrote 10-plus books and penned countless op-eds for newspapers and magazines where he shared in detail his positions on various topics. Thus, it is a sin and a shame that all most people know about MLK are the words that he uttered in the speech he gave during the Aug. 28, 1963 March on Washington for Jobs and Freedom—“I Have a Dream” (a speech he gave at least two times before that famous march).

Shared below are just a few lesser-known, but very powerful and telling quotes from our “Drum Major for Justice.” But please know that there is an entire world of information available to us all not only about Dr. King, but by him—his own articles, books and speeches—that can give us more than a surface-level understanding of the man and what he stood for.

“I must confess that that dream that I had that day has in many points turned into a nightmare. Now I’m not one to lose hope. I keep on hoping. I still have faith in the future. But I’ve had to analyze many things over the last few years and I would say over the last few months, I’ve gone through a lot of soul-searching and agonizing moments. And I’ve come to see that we have many more difficulties ahead and some of the old optimism was a little superficial and now it must be tempered with a solid realism. And I think the realistic fact is that we still have a long, long way to go.”

“We must be concerned not merely about who murdered them, but about the system, the way of life, the philosophy which produced the murderers.”

“When our days become dreary with low-hovering clouds of despair, and when our nights become darker than a thousand midnights, let us remember that there is a creative force in this universe, working to pull down the gigantic mountains of evil, a power that is able to make a way out of no way and transform dark yesterdays into bright tomorrows. Let us realize the arc of the moral universe is long but it bends toward justice.”

“True compassion is more than flinging a coin to a beggar. It comes to see that an edifice which produces beggars needs restructuring.”

“A riot is the language of the unheard.”

–King, during an interview with Mike Wallace

“Of all the forms of inequality, injustice in health is the most shocking and inhuman.”

“Every step towards the goal of justice requires sacrifice, suffering, and struggle; the tireless exertions and passionate concern of dedicated individuals. Without persistent effort, time itself becomes an ally of the insurgent and primitive forces of irrational emotionalism and social destruction.”

–King, In Chapter 11 of his text, “Stride Toward Freedom: The Montgomery Story, Where Do We Go From Here?”

“An individual has not started living until he can rise above the narrow confines of his individualistic concerns to the broader concerns of all humanity.” (Birth of a New Age, 1956)

Help us Continue to tell OUR Story and join the AFRO family as a member –subscribers are now members!  Join here!