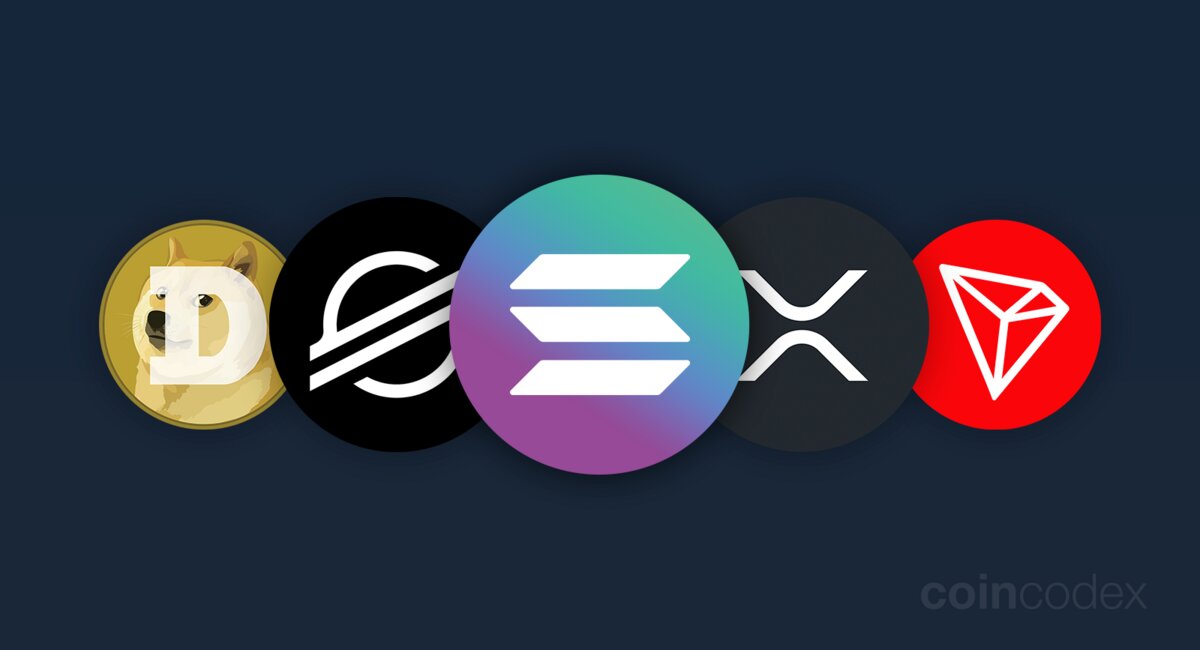 Cryptocurrencies are a unique form of digital money that can be sent on a 24/7 basis anywhere in the world with practically no restrictions, as long as you pay the necessary transaction fee. It doesn’t matter if you’re sending crypto to your neighbor or to someone on the other side of the planet—the transaction fee will be the same.

While the freedom afforded by cryptocurrencies is certainly welcome, the most popular cryptocurrencies are not exactly cheap to use. Both Bitcoin and Ethereum are often criticized for their high transaction fees, as a single transaction on these networks can cost upwards of $20 during periods of intense network activity.

If you’re put off by the high transaction fees associated with using Bitcoin and Ethereum, that shouldn’t be a reason to give up on crypto. This is because there’s plenty of cheaper alternatives available on the market.

In this article, we’ll show you ten of the cheapest cryptos to transfer. These cryptocurrencies can be sent for just a couple of cents per transaction, or even less. Coins with low transaction fees are great for everyday payments, transferring value between different cryptocurrency exchanges and micropayments. Without further ado, let’s get started with the cheapest crypto to send.

Solana is a smart contracts platform with a unique architecture that allows it to process thousands of transactions per second while keeping costs extremely low. Solana achieves this by utilizing a unique Proof-of-History algorithm and a Proof-of-Stake consensus mechanism.

Solana was founded in 2018 by Anatoly Yakovenko. The platform’s mainnet launched in March 2020, and saw a huge boost in adoption in 2021. While SOL has lost a lot of its value in the 2022 bear market, Solana still has one of the most impressive ecosystems in the cryptocurrency sector.

Transactions on Solana only cost about $0.00025. This means that you can send SOL, custom SPL tokens and NFTs at virtually no cost. So, if transaction fees are pricing you out of decentralized finance or NFT trading on Ethereum, Solana is definitely a blockchain worth considering. Among popular cryptocurrencies, Solana is one of the cryptos with the lowest fees and one of the most promising crypto projects for the long term.

XRP is a cryptocurrency that was initially released in 2012, making it one of the most established crypto assets on the market today. XRP distinguished itself from Bitcoin by not utilizing Proof-of-Work, instead relying on the unique XRP Ledger Consensus Protocol. This consensus protocol allows XRP to process transactions quickly while charging extremely low fees.

However, some members of the crypto community have criticized the XRP cryptocurrency for allegedly being insufficiently decentralized. This is because a large portion of the XRP supply is held by Ripple, a United States-based fintech company that utilizes XRP in its cross-border payments products. In the early days of XRP, Ripple was gifted 80 billion XRP (80% of the supply) by the XRP founders.

While the XRP cryptocurrency doesn’t offer smart contracts, it provides an extremely efficient way for simple transfers of value. This is why XRP is often used to move value from one cryptocurrency exchange to another.

Before you set up an XRP wallet, you have to keep in mind that each account on the XRP Ledger needs to have a reserve of at least 10 XRP before it can be used. This 10 XP reserve cannot be spent.

Stellar is a cryptocurrency that started off as an offshoot of XRP. The project was co-founded by Jed McCaleb, who was part of the trio that created XRP. The native asset of the Stellar blockchain is called lumens, and has the ticker symbol XLM. It implements a similar consensus algorithm to XRP, enabling cheap and fast transactions.

The minimum transaction fee on the Stellar blockchain is just 0.00001 XLM. This means that 1 XLM can theoretically pay for 100,000 transactions. In reality, users have to pay a slightly higher fee to have their transactions confirmed in a timely manner — a realistic figure is about 0.0001 XLM, which is still extremely low.

The Stellar blockchain can be used to efficiently trade different assets in a decentralized manner thanks to its built-in decentralized exchange functionality. You can access this functionality through interfaces such as StellarX, where you can trade XLM against various fiat currencies and crypto assets. Of course, you can also simply use XLM as a highly efficient digital currency for everyday transactions.

In 2022, the Stellar Foundation announced that they started developing smart contracts functionality for the Stellar blockchain. If it is implemented successfully, it could provide a big boost for the Stellar ecosystem.

Dogecoin is a meme coin that was launched in 2013 and has remained a mainstay of the cryptocurrency market ever since. From a technical standpoint, Dogecoin is a fork of Litecoin, and it is also merge-mined alongside LTC.

Broadly speaking, Dogecoin provides similar functionality to Bitcoin. It is a decentralized peer-to-peer digital currency secured through Proof-of-Work (mining), that can be used to send transactions anywhere at any time.

While Dogecoin does not have the extreme level of security offered by Bitcoin, it does provide much cheaper transactions. At the time of writing, you can send DOGE for about $0.08 in fees. Transaction fees can vary significantly depending on how much demand there is for the Dogecoin network, but they have historically stayed under $1 most of the time.

During periods of low network activity, Dogecoin offers some of the lowest crypto transaction fees on the market. However,  when there’s a lot of hyper around DOGE, the network becomes less efficient to use.

TRON is a blockchain platform similar to Ethereum which implements a Delegated Proof-of-Stake (DPoS) consensus mechanism. This makes it able to process transactions with very low costs.

Transaction fees on the TRON network are almost negligible compared to Ethereum, which has made it a popular platform for stablecoin transactions. More specifically, TRON is very commonly used to transact with the USDT stablecoin.

USDT usage on the TRON blockchain.

While the decentralized app ecosystem on TRON isn’t nearly as diverse as what you can find on Ethereum, TRON is still worth considering if you’re looking to get into DeFi and other on-chain activities without spending a fortune on transaction fees.

Litecoin is a cryptocurrency that was launched in 2011 by Charlie Lee. It was one of the first altcoins on the market, and it has stayed relevant until today. In fact, its arguably one of the best cryptos to buy right now thanks to its upcoming halving.

Litecoin is extremely similar to Bitcoin, although there are some key differences. Litecoin uses the Scrypt hashing algorithm instead of the SHA-256 algorithm utilized by Bitcoin. It also has four times faster block times than Bitcoin, and a maximum supply that’s four times larger.

If you like the idea of Bitcoin but don’t want to spend a lot on transaction fees, Litecoin is definitely worth checking out. At the time of writing, sending LTC will set you back only a little more than one cent.

Dash is a popular altcoin that was launched in early 2014. It utilizes a combination of Proof-of-Work mining and masternodes. The name Dash stands for “digital cash”, and the cryptocurrency is designed to be a convenient way of making payments.

Dash can also be considered a privacy coin, as its PrivateSend feature allows users to obfuscate the origins of their DASH coins to improve the privacy of a transaction on the Dash network. Dash also boasts InstantSend technology, in which transactions are verified by the Dash masternode network. Transactions sent through InstantSend are confirmed in seconds.

Dash transaction fees are very low, as you can usually send a DASH transaction for less than one cent in fees. So, if you want an efficient way of making crypto payments, it’s certainly worth taking a closer look at Dash.

Algorand is a blockchain platform for smart contracts that utilizes a Proof-of-Stake consensus algorithm. The Algorand project was founded in 2017 by Silvio Micali, a prominent computer scientist that has made significant contributions in the field of cryptography.

The Algorand mainnet went live in 2019, and has since been upgraded with improved smart contract capabilities, support for issuing custom tokens and more. Algorand is designed to be an environmentally-friendly and efficient blockchain, and also offers low transaction fees.

The minimum transaction fee on Algorand is 0.001 ALGO, which means that 1 ALGO can theoretically pay for 1,000 transactions. Algorand can be a great blockchain for users that want to start exploring use cases like NFTs and DeFi, but don’t want to deal with the high transaction fees of Ethereum.

Nano is a cryptocurrency that launched in 2015 under the name RaiBlocks. Nano doesn’t implement any smart contract features, but is instead hyper-focused on being as efficient as possible for simple payments.

The Nano blockchain has zero transaction fees. This is possible because of its unique architecture. Nano isn’t actually a blockchain, as it utilizes a DAG (directed acyclic graph) architecture.

While Nano is one of the fastest and cheapest cryptocurrencies available today, it has unfortunately seen limited adoption so far. The market capitalization of XNO, the native asset of the Nano blockchain is only about $86 million at the time of writing. If you’re looking for the cryptocurrency with the lowest transaction fees, however, it’s difficult to beat Nano’s zero-fee design.

Zcash is a privacy-focused cryptocurrency that made its debut in 2016. While it is heavily inspired by Bitcoin in many aspects, Zcash implements innovative zero-knowledge technology that makes it possible to maintain complete privacy of transactions while proving that all transactions conform to the protocol’s rules.

Users that want to transact with ZEC can choose to send a transparent (public) or shielded (private) transaction. This is a unique feature compared to many other privacy coins, which usually only allow private transactions.

Zcash transaction fees are very low, although they have increased as of late. Still, you will only have to spend a couple of cents to send a transaction via the Zcash network. If you want to reduce your cryptocurrency transaction fees while protecting your financial privacy, Zcash is certainly among the best options to consider. In the future, Zcash will likely transition to Proof-of-Stake, which could make it even more efficient.

It has become clear that the best way for ECC to contribute to the #Zcash $ZEC community over the next three years is to release an official ECC wallet on top of a highly interoperable Zcash protocol that leverages proof-of-stake consensus.https://t.co/SxMF1pNCTB

Let’s take a look at how the cryptocurrencies we have featured square up against each other. As you can see, all of them are inexpensive to use, with some having practically negligible transaction costs. Please note that the transaction fees and speeds are estimates of what you can expect during normal network conditions. If there is a surge in demand for the blockchain you’re using, transaction costs will be higher and speeds will be lower.

Even though transacting with Bitcoin and Ethereum can sometimes be expensive, there’s plenty of alternatives available that offer extremely cheap transactions. Whether you want to use smart contracts or simply send value using crypto, there’s options you can use that will cost you just a few cents per transaction or even less.

By utilizing these coins to send value around, you can often achieve the same results as you would with BTC or ETH, but spend only a fraction of the money on fees. If you’re not that focused on low transaction fees, check out our list of the top coins with long-term potential.