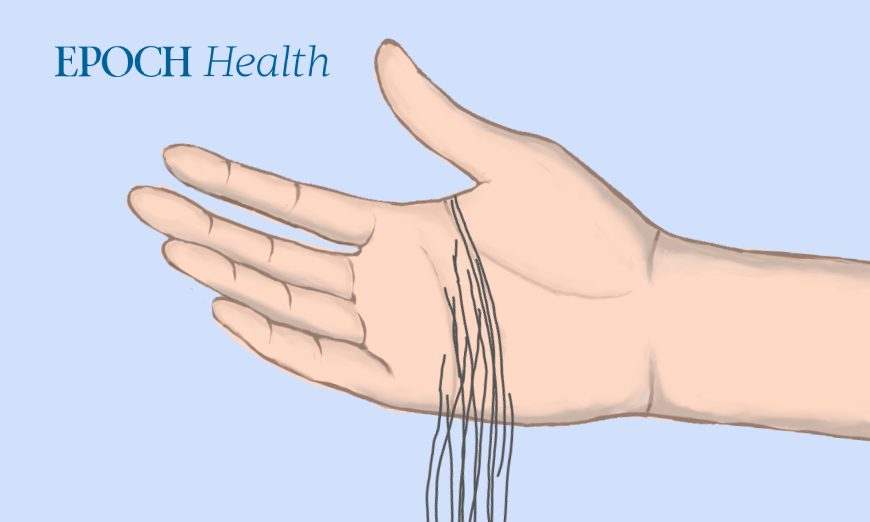 Hair loss is distressing. Looking at the handfuls of hair that fall out of your hands every time you wash or brush your hair is absolutely heart-wrenching. According to traditional Chinese medicine (TCM), hair loss is often caused by kidney deficiency, blood deficiency, or staying up late. The following are four tips from TCM practitioners to prevent hair loss—namely, homemade natural shampoo, diet for hair care, acupressure massage, and seven-star needle tapping. These methods can help regrow your hair and even reduce gray hair.

There are three main reasons for unnatural hair loss:

The reason most young people lose their hair is staying up late. Imbalanced work and rest can cause flaring up of deficient fire, resulting in insufficient nutrition for the scalp.

There is a saying in traditional Chinese medicine that “kidney qi deficiency leads to hair loss and premature graying.” Kidney qi will begin to decline with age, and hair will gradually become thinner.  Furthermore, many young adults nowadays are depleted of kidney essence due to excessive sexual activity, etc., which also leads to hair loss.

There is a saying that “hair is an extension of blood,” and hair loss due to blood deficiency is common in women. For example, excessive bleeding during the menstrual period or excessive blood loss after childbirth can lead to significantly increased hair loss.

The first step to stopping hair loss is changing your shampoo.

“Whenever a patient with severe hair loss visits the clinic, the first thing I ask them is [about their] shampoo,” said Dr. Serene Feng, the president of New York Four Seasons Acupuncture PC.

When the patient is in poor physical condition due to kidney deficiency and staying up late, coupled with the use of the wrong shampoo, both internal and external factors will lead to severe hair loss. Generally, shampoos on the market, especially cheap ones, contain chemicals that not only irritate the scalp, but also affect hair growth and damage hair roots.

On the other hand, homemade natural shampoos are not only harmless, but can also address the root cause of hair loss.

Depending on the cause of hair loss, Feng recommends using the following shampoo formula:

People who experience hair loss due to staying up late and wind-heat are also prone to oily scalps. These people can boil water with some heat-clearing and blood-cooling TCM materials, and then wash their hair with it.

People with kidney deficiency can wash their hair with kidney-tonifying herbs, such as tuber fleeceflower root and mulberry. These herbs are jet black in color and act as natural hair dyes that can make your hair darker and brighter.

People with blood deficiency can wash their hair with medicinal materials that nourish yin and blood.

To make the homemade shampoo, prepare equal amounts of all of the above medicinal materials, and mix them with water at a ratio of 1:100. Then, put the materials and water into a pot, boil it over high heat, and then continue to boil it over medium heat for half an hour.

After the liquid has cooled down a bit, take an appropriate amount and apply it on your hair, soaking all the hair strands. Then, wrap your head in a hot towel, put on a shower cap, and allow the heat to fumigate your hair in the towel to help absorb the herbs. Wash off with water after 20 minutes.

“Use this shampoo consistently for three to four weeks, and you will notice less hair loss and better hair quality,” said Feng.

For those who lose their hair due to wind-heat, TCM ingredients such as Chinese arborvitae and chrysanthemum can clear the heat from the scalp. Once the scalp cools down, the hair roots will be less likely to loosen and result in hair loss.

If you find it troublesome to boil water all the time, you can boil a large amount at a time and store it in the refrigerator. Take out an appropriate amount with a clean spoon when you need to use it, and seal the rest. Make sure to use it up within two weeks.

Feng mentioned that natural shampoos do not clean the oil off the scalp as well as commercial shampoos due to the lack of foaming ingredients. Adding tea seed powder can provide a better cleansing effect. Tea seed powder is made from tea tree seeds, which are very effective at removing oil.

In addition to washing your hair with natural shampoo, you should also change your diet to improve the problems of wind-heat, kidney deficiency, and blood deficiency.

Reduce foods that burden the liver and gallbladder, such as greasy, fried, or baked foods, and foods with many additives. Increase the intake of natural fruits and vegetables to help detoxify the body.

“Thick” beverages such as strong coffee and milkshakes should also be reduced. Drink more chrysanthemum tea, mulberry leaf tea, and dandelion tea, etc., as they can clear heat, detoxify, and burn fat.

Also, be sure to break the habit of staying up late, and try to fall asleep by 11 p.m.

Black foods: black sesame, black beans, and mulberries can be used to make tea or snacks.

Kidney-shaped foods: beans and fruits such as cashew nuts, or animal kidneys such as pork loin and beef kidney.

Bones: As the saying goes, “kidney governs bone, and bone produces marrow.” Conversely, bones can also nourish the kidneys. Pork bones with a lot of bone marrow can be used to make soup.

Tails: such as pork tails and oxtails.

Foods such as jujube, longan, mulberry, spinach, and beef, have the effect of nourishing blood. People with blood deficiency can also use black-bone chicken to make soup. Qi-invigorating food is also very important.

If hair loss persists despite consuming a lot of blood-enriching food, the person may have qi deficiency. Traditional Chinese medicine believes “qi is the commander of blood,” which means that qi promotes the circulation of blood. When there is enough qi, the effect of blood nourishment will be significant. Both yam and Japonica rice can invigorate qi, but the effect is too mild to promote the circulation of thick blood. In this case, it is better to use pilose asiabell root, pseudostellariae radix, milkvetch root, etc., which have more potent effects.

The Third Method: Massage the Acupoints on the Head and Feet to Prevent Hair Loss

Acupressure massage is also a very effective way to prevent hair loss. As the saying goes, “treat the head when the head aches.” In addition to the head, there are also some effective hair growth acupoints on the feet.

Acupoints on the head:

Location: in the center of the top of the head, in line with the tips of the ears.

Baihui is the most important acupoint for treating various hair problems. When massaging, put the index finger, middle finger, and ring finger together, and use the finger pulp to gradually press along the midline of the human body from the front hairline to the back of the head. Press several times on the Baihui acupoint, and there will be a feeling of soreness.

Location: under the occipital bone behind the ear, and in the distinct depression between the two large tendons in the hairline.

Put your four fingers behind your head and rub with your thumb. Massaging the Fengchi acupoint can stimulate the hair follicles, thus making the hair roots stronger.

Location: The Jiaosun acupoint is located at the sore points on the hairline above the ear tips, while Yifeng is located in the distinct depression behind the earlobes.

Use the pulp of your index finger, middle finger, and ring finger to massage along the back of the auricle (the visible portion of the ear) from Jiaosun to Yifeng. This massage is especially beneficial for people with gray hair on the temples.

Location: the soreness and swelling points on the forehead hairline.

Massage with the pulp of your middle finger and ring finger. Pressing the Touwei acupoint can activate the qi and blood in the whole head.

Combing your hair more often to massage the entire scalp is also recommended. However, instead of plastic combs, use a wooden comb (especially one made of peach wood) or a horn comb. Horn combs are cool in nature, so they are especially good for people with wind-heat in the head.

Acupoints on the feet:

Location: in the depression between the tip of the ankle and the Achilles tendon on the medial side of the foot.

Press with the pulp of your thumb. Taixi is the origin acupoint of the kidney meridian. It has a very good kidney-tonifying effect, and is especially suitable for treating hair loss and gray hair caused by kidney deficiency.

Location: on the dorsum of the foot, in the depression about one thumb-width above the seam between the first and second toes.

Press with the pulp of your thumb. The Taichong acupoint nourishes the liver. Since the liver and kidneys have the same origin, it is best to press the Taichong and Taixi acupoints together.

Acupoint on the hands:

People who lose hair due to blood deficiency can massage the Shousanli acupoint to replenish qi and blood.

The seven-star needle, also known as the plum-blossom needle, has a long handle and several small needles shaped like plum blossoms on the head of the handle, hence the name.

Seven-star needle acupuncture is commonly used to treat hair loss. In particular, men with a receding hairline on the forehead or alopecia areata the size of a coin, can be treated by tapping with seven-star needles.

First, sterilize the small needles with alcohol, and then gently tap the hair loss area of the scalp until it is slightly flushed and hot. Then rub some safflower oil on it.

“After a month of persistent tapping, I have never seen a patient whose hair does not grow back,” Feng said.

The principle of tapping with the seven-star needle is the same as combing hair and acupressure massage. These practices stimulate and strengthen local qi and blood circulation. However, the stimulation of the seven-star needle is stronger, and the effect is noticeable. It tells the brain that “there are not enough troops in the scalp.” With these daily reminders, the brain will allocate “troops” to the hair loss area, and the hair will grow naturally.

However, be careful not to tap too hard to avoid injury and bleeding. If bleeding occurs, wipe and disinfect with alcohol.

Health 1+1 is the most authoritative Chinese medical and health information platform overseas. Every Tuesday to Saturday from 9:00 a.m. to 10:00 a.m. EST on TV and online, the program covers the latest on the coronavirus, prevention, treatment, scientific research and policy, as well as cancer, chronic illness, emotional and spiritual health, immunity, health insurance, and other aspects to provide people with reliable and considerate care and help.
Online: EpochTimes.com/Health
TV: NTDTV.com/live