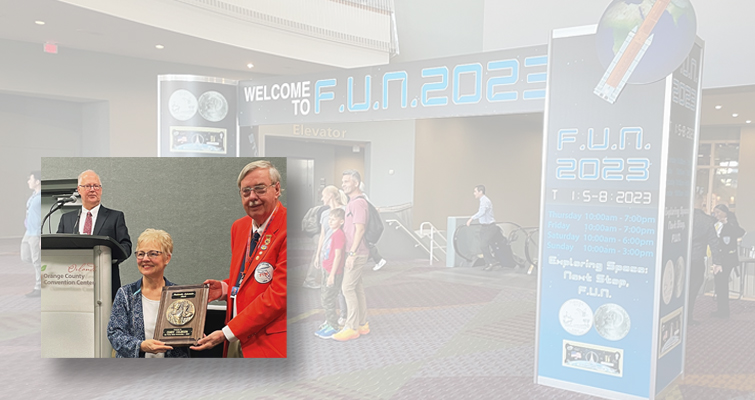 The 68th annual Florida United Numismatists convention has completed its four-day stint, and reviews after the event are running mostly positive. That so many were able to leave Orlando and the Orange County Convention Center with a momentum of optimism is a good sign for the year ahead.

Like some past shows, bourse dealers and exhibitors faced challenges beyond the control of convention organizers in travel delays and disruptions. Some who had planned to arrive by air instead found themselves relying on driving over 10 hours to reach their destination. Tales of delayed luggage and rerouted journeys abounded, but the obstacles failed to thwart the hopes of those able, one way or another, to make it there. Despite the challenges, many exhibitors reported favorable results.

To counter what some consider an inconvenient location in the North Concourse of the Orange County Convention Center, FUN officials set up shuttle service between host hotels and the show location for 2023. This amenity was well-received and utilized and made the process a bit simpler for those who took advantage of it. It was much easier to enjoy hitting the bourse floor after a bus ride than a 15-minute walk.

After setup day on Wednesday, opening ceremonies were at 9:45 on Thursday. This year’s theme was “Exploring Space: Next Step” and incorporated the footprint element of the Apollo 11 50th anniversary commemorative coin issued in 2019. The coin was the centerpiece attraction of the 2022 FUN convention display by the Astronaut Memorial Foundation, who returned for their second show and featured a new collectible. Partnering with Elite Coinage, the foundation was selling specially designed notes centering on the next generation of lunar missions. The limited-edition notes, which will be subject of a future Coin World story, paid homage to the Artemis I lunar mission, which was completed in December 2022.

Floor activity was brisk from the start. For the first time in several years, the United States Mint was able to set up a display, complete with a guest appearance of Deputy Director Kristie McNally. Many traditional events of the FUN show, including gold panning, kid’s activity center and a vast educational display provided staple activities for new and returning visitors. The popular spider press exhibit was back after its debut at FUN last July.

Many observers noted the increased presence of younger participants, including dealers and families. The Saturday scout program was again a huge draw with area youngsters on hand to learn more about coins and complete steps toward coin collecting merit badges.

For those who came to the convention for more than buying or selling, an array of interesting educational presentations was put together by Randy Campbell, with several annual presentations complemented by new presenters. Subjects for 2023 included “AU-58 or MS-63? Market Grading Explained,” “How to Fail Miserably and Still Succeed as a Collector and Dealer,” and “My 12 Favorite VAMs for 2023.”

Five new numismatists joined the prestigious ranks as Numismatic Ambassadors in a Friday breakfast session. The Numismatic Ambassador program began in 1974 and has been coordinated by FUN since 2015. The award is given by popular vote and encompasses unsung heroes at the grassroots level of coin collecting and nationally known numismatists. Coin World was represented, as senior editor Paul Gilkes was among the honorees, joining Cindy Calhoun, Glen Jorde, Joshua McMorrow-Hernandez and Mitch Sanders.

Several organizations utilized the convention for membership and board meetings. The Society of Paper Money Collectors issued its annual awards during a Saturday breakfast session. Other clubs with meetings included the Society of Silver Dollar Collectors, John Reich Collectors Society, Liberty Seated Collectors Club and Bust Half Nut Club.

The show marked a passing of the torch, as Cindy Wibker, who served as FUN show coordinator for over 30 years, will be stepping down in April, and Katie Williams will pick up the role. At the annual meeting of the Florida United Numismatists on Sunday, Vice President Tony Swicer assumed the position as president, replacing Bob Hurst.

The 17th annual Summer FUN convention will be held July 13 to 15 in the West Concourse of the Orange County Convention Center.