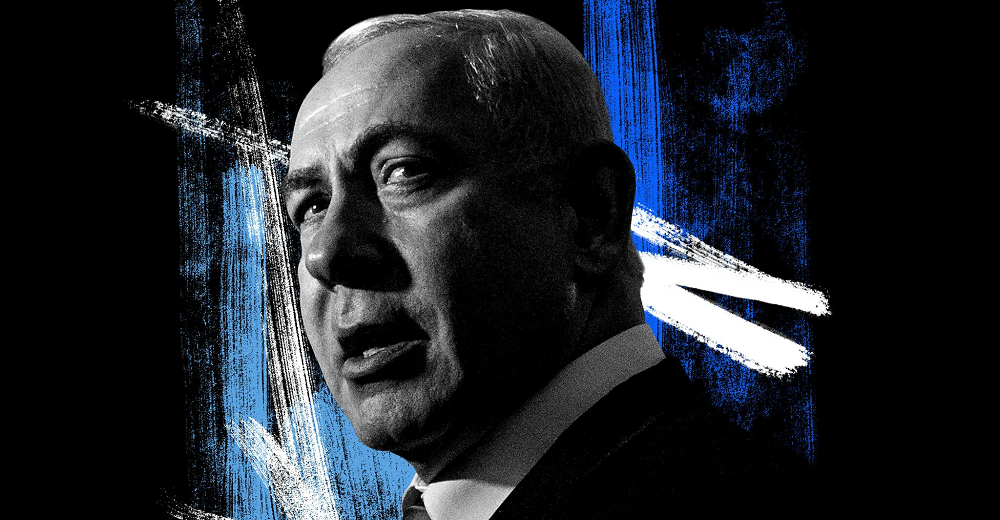 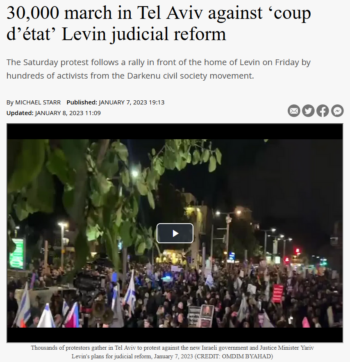 There is a political crisis in Israel—particularly for Palestinians, minorities and anyone who believes in secular democracy. But US press coverage has had trouble recognizing that the new government of Benjamin Netanyahu is anything other than business as usual.

The recent Israeli elections thrust Netanyahu back into power and the prime ministry (Reuters, 12/28/22), prompting major protests that called his new government a “coup d’etat” and urged a “preventative strike against dictatorship” (Jerusalem Post, 1/7/23; i24, 1/8/23). Middle East observers are alarmed, not just at Netanyahu’s own military hawkishness, but the fact that his ruling coalition includes religious and nationalist fringe elements, including followers of the late Meir Kahane, who advocated for the expulsion of Arabs from Israel (New York Times, 11/6/90). While Israeli politics have been on a rightward trajectory for two decades, the most recent election has put the country into a dark zone of outright illiberalism that almost seems irreversible.

It includes racists, theocrats, homophobes and ultra-nationalist zealots. It may have been democratically elected, but many of its senior members are deeply anti-democracy. We are horrified by the incoming government’s stated plans to intensify the process of de facto annexation and further entrench the Occupation. In the past, we congratulated incoming Israeli governments and wished them success. This time, given the makeup of the government, the dangerous views and background of its members and their stated goals, we cannot but sound our alarm.

The election results were also a near-total electoral vanquishing of what remained of the Israeli left. The once mighty Labor Party finished in last place among the parliamentary parties with four seats, and the Hadash and Ta’al coalition got only one more, despite the fact that Hadash’s charismatic leader was once thought to be the Arab minority’s political hope (New Yorker, 1/17/16). Meretz, Israel’s social democratic party, now has zero seats. Israel’s government isn’t just far right, it’s serving without any meaningful political counterbalance. 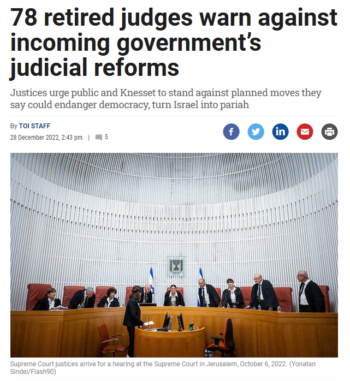 An Israeli former judge (Times of Israel, 12/28/22) said he signed a protest letter because never before “could we imagine, in the foreseeable future, the destruction of Israeli democracy.”

There is a palpable sense of alarm in Israeli media—Ha’aretz has called the election results “fascist” (1/13/23) and referenced a government of “thugs” (1/12/23). The paper (12/28/22) has reported that the Knesset, the Israeli parliament, has passed a “bill that would give more authority over police to the far-right lawmaker Itamar Ben-Gvir.” The paper (12/27/22) also reported on “legislation [that] paves the way for Religious Zionism leader Bezalel Smotrich to appoint a minister in the Defense Ministry who will oversee the West Bank, including responsibility over the civil administration.”

An incoming minister has suggested “that Israeli doctors should be allowed to refuse treatment to LGBTQ patients on religious grounds” (Guardian, 12/26/22). “Israel will not ratify the Istanbul Convention on combating violence against women” (Ha’aretz, 12/26/22), thanks to the new government.

Jurists and legal scholars (Times of Israel, 12/28/22) have warned against the “destruction of Israeli democracy,” citing the new government’s mission to weaken the Israeli Supreme Court, including “passing a so-called override clause that would let the Knesset reinstate laws invalidated by the court.” They have also  introduced “plans to revamp the panel that selects judges, giving a majority to the government’s representatives and its appointees,” and moved to “weaken anti-discrimination laws.”

One former Supreme Court chief judge, Aharon Barak (Financial Times, 1/8/23), “likened the plans to the attacks on judicial independence carried out by authoritarian governments in Poland, Hungary and Turkey.”

Israelis are already feeling the impact. A left-wing Israeli journalist was detained by police on suspicions that his pro-Palestine tweets could incite terrorism (Middle East Eye, 12/27/22). One law professor (Jewish Telegraphic Agency, 1/8/23), when asked what countries he’d compare Israeli to right now, said, “The two most prominent recently are Hungary and Poland, which are not necessarily countries that you want to compare yourself to.” Tel Aviv Mayor Ron Huldai (Times of Israel, 12/2/22) declared, “Israel is being transformed from a democracy to a theocracy.”

For Palestinians, the new government means heightened tension. Netanyahu has vowed the expansion of illegal Jewish settlements in the Occupied Territories (Deutsche Welle, 12/28/22) and the government is now banning public displays of Palestinian flags (Sky News, 1/9/23). The new government is already retaliating against recent Palestinian efforts to push the International Court of Justice to move against the decades-old Israeli occupation, including “imposing a moratorium on Palestinian construction in some areas of the Israeli-occupied West Bank” (Al Jazeera, 1/6/23).

‘No longer a bedrock of stability’ 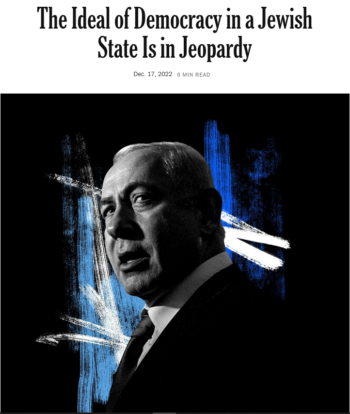 The New York Times (12/17/22) fails to question whether a state that defines itself as being a state for only some of its citizens can be a democracy.

But the alarm felt by those close to the situation is not reflected much in the US press. The New York Times editorial board (12/17/22) lamented the move to the right, and called for US pressure on the Jewish state, but as Jewish Currents editor Arielle Angel said in a letter to the editor (12/23/22), the editorial “doesn’t urge any specific actions.” Instead, it “echoes the president in emphasizing the inviolability of the US/Israel alliance—a bromide that assures Israel that its blank check is guaranteed.”

Times columnist Thomas Friedman (12/15/22) fretted about the future of Israel, noting that the new government is creating a “total mess that will leave Israel no longer being a bedrock of stability for the region”—a point of view completely divorced from the experience of Palestinians, Syrians and Lebanese, who have never known “stability” from Israel.

The Washington Post (12/21/22) said the “new government has already sparked concern among Israelis and members of the international community over bills that seek to prioritize Israel’s Jewish character over its democratic one.” This echoes the Times editorial’s headline, “The Ideal of Democracy in a Jewish State Is in Jeopardy.”

This impossible wish for a country that is both an ethno-state and a democracy is at the heart of the problem with the mainstream US press’s view of Israel/Palestine.

The historic extremism of the new government has certainly been documented in the United States, as the AP has covered the response to Israel’s right-wing government in straight reporting, including a report (12/26/22) on Israeli Air Force veterans who worry about the coalition’s impact.

But the Wall Street Journal (12/27/22) ran an editorial by Religious Zionism’s Smotrich that defied criticism, insisting that the government he belongs to will “strengthen every citizen’s freedoms and the country’s democratic institutions, bringing Israel more closely in line with the liberal American model.” He added, “Israel is a Jewish and democratic state and will remain so.”

‘Radicals’ on both sides 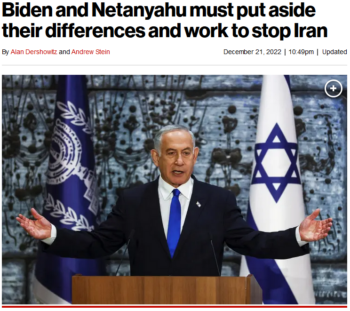 A New York Post op-ed (12/21/22) equates the far-right takeover in Israel with the Biden administration being “influenced by the Democrats’ increasingly radical left-wing elements.”

Alan Dershowitz, former Harvard University law professor and outspoken Israel supporter, and Andrew Stein, a former New York City Council president, wrote an op-ed in the  New York Post (12/21/22) that painted President Joe Biden and Netanyahu as two sides of the same coin. Biden, they said, was “influenced by the Democrats’ increasingly radical left-wing elements,” while Netanyahu had a coalition with the far right. Their solution, then, was for the two leaders to embrace their essential centrism and work together—not to protect democracy in either country, but to gang up on Iran.

Of course, this “both sides” logic is all too common in US media. Netanyahu’s extremists include followers of a racist ideology that was once considered toxic even on the right. Biden’s “extremists” say they want universal healthcare. These things are just not the same.

US press coverage of Israel’s political situation ranges from support to muted concern, as opposed to an existential crisis for a place that calls itself a democracy. It is slowly dawn on US media that political affairs in Israeli have deteriorated, even though it’s been plenty of time to digest this since two of the most prominent human rights organizations—Human Rights Watch and Amnesty International—have labeled Israel’s ethnic segregation a form of apartheid (FAIR.org, 2/3/22).

Israel’s political turn should be treated with the same urgency as Donald Trump’s election in 2016 and his desire to remake the US government into an autocracy. The problem may be that Netanyahu is a more talented politician than Trump, and his coalition has little opposition in its path. Given Israel’s importance in US foreign policy, the nation’s spiral into extremism is cause for dismay, not just among observers with an interest in the country, but for news outlets that claim to defend the global democratic order.

FAIR’s work is sustained by our generous contributors, who allow us to remain independent. Donate today to be a part of this important mission.