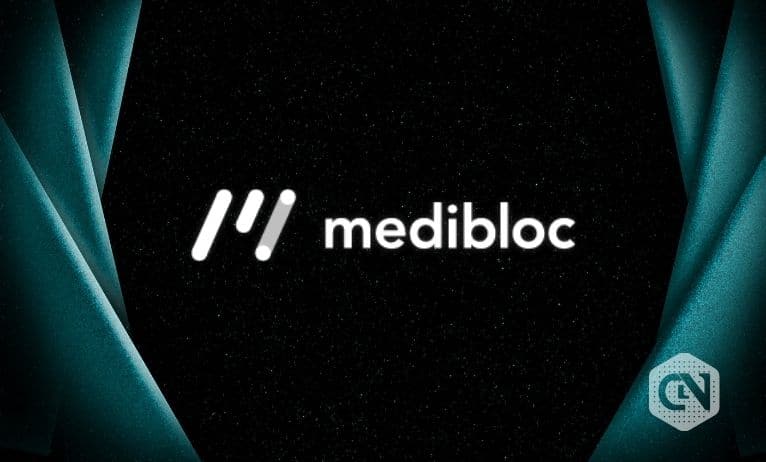 The crypto market has been entering almost every sector. By providing solutions to centralized applications, the crypto world has found ways to solve the problem of having a single point of failure in the operating mechanism of their frameworks. MediBloc is a crypto project dedicated to solving the healthcare industry’s problems and changing the way it works. The crypto MediBloc (MED) is currently ranked #199 with relatively less activity, making it an ideal subject to research. Sometimes, the projects with less attention are those where great opportunities lie.

The Overview of MediBloc Ecosystem

To summarize MediBloc (MED) in a sentence, it is a blockchain-based healthcare information ecosystem. It is a decentralized ecosystem for health care providers, patients, and medical researchers. It was established in 2017 by Eunsol Lee and Allen Wookyun Kho. The team has created several patient-centric Apps.

One of those apps that has gained recognition is the Medipass that offers users a streamlined service for healthcare insurance claims. The healthcare data ecosystem protects individual’s privacy using Panacea blockchain technology. The goal is to enable a decentralized, tamper-proof blockchain ecosystem that gives power to the personal and allows them to control and use it according to their requirements.

The technology allows the producers of healthcare data to issue signed credentials by using a decentralized identifier or DID to patients. This will enable them to share their information with other consumers and allow cross-verification by running an authentication check with the DID document on the Panacea blockchain. It reinforces the healthcare service ecosystem by providing opportunities for everyone, such as medical professionals, institutions, insurance companies, and pharmaceutical companies. Everyone can earn rewards depending on their contributions and use the MediBloc (MED) crypto coins to expand their services in the ecosystem.

One of the exciting things about MediBloc is how it manages security. As we all know, healthcare data is pure gold, and storing it on the blockchain won’t be deemed safe because of its sensitive and personal nature. Since anyone can access the blockchain as it’s a public ledger, directly recording the information can cause leaks. MediBloc (MED) ensures that information is stored and managed only at the user’s endpoint to mitigate this risk. To add to this, it is always encrypted before transmitting to a separate channel to ensure that high-security standards are maintained during the sharing process. The DID authentication mechanism offered by Panacea ensures that the information sent is correct and reliable.

The MediBloc (MED) coin aims to incentivize participation and create an economic ecosystem in the network. Depending on the participant’s contribution towards the MediBloc platform, they receive rewards in the form of the MED coins. Healthcare providers who contribute to the production of medical health records and distribution of the same are entitled to the fair share of incentives as well as the customers or patients. The plan for MediBloc (MED) is to become a means for payment for several types of healthcare expenditures using blockchain technology in the future.

MediBloc has two prominent use cases as of now. The first is its Dr. Palette (EHR) software for medical institutions that creates and provides health information within the MediBloc ecosystem. The EHR medical data can include Step count, blood pressure, heart rate, or blood glucose levels. The second is the Medipass. Medipass is a PHR solution that allows patients to manage the personal health data that medical institutions have recorded.

The PHR medical records may include diagnosis, treatment, medications, and vaccination history. All of this is designed to connect patient-centered healthcare platforms. The information distribution method is based on an identity verification system that uses Panacea’s DID and data authentication. The MED can thus be used to incentivize the network participants to contribute to the ecosystem so that the patients can have complete control over their health details and have the right to control, use, and access them.

The price of MediBloc started to surge in the first quarter of 2021. The chart shows an increase in volume compared to the average trading volume for the prior period of 2021. In the month of February 2021, the MED price started to increase gradually at first, as the RSI created an overbought signal, and the MediBloc price increased ten folds in a matter of weeks.

The Bollinger bands displayed an increase in volatility as the MediBloc prices couldn’t stop surging. In March 2021, the MED value formed a consolidation base of almost a week or two and spiked in prices in just two days creating its highest price in the month of April 2021. This MediBloc price increase did not sustain itself as the value declined and formed a down-trending pattern from the month of April to June. The MediBloc price reached its lowest point in June as the RSI hit an oversold condition. The MediBloc price then began to move up and looked as if it was ready to resume its uptrend trajectory, but it could not. For the second half of 2021, MediBloc (MED) price stayed in a side trend and continued to struggle.

As displayed by the Accumulation and distribution indicator, there were huge spikes in the first quarter of 2021 for the MediBloc price. There was no significant sense of where the heavy volume would take the price. Regardless, the price trended upwards and moved above its 50-day moving average and strongly stayed in an uptrend from mid-February to the first week of April 2021. Currently, the Accumulation/ Distribution indicator is stable with 13.86M.

The MediBloc (MED) price fell below its 50-day moving average and stayed that way till June 2021, but it couldn’t take off again. It seems as if the spike in price resulted from unpredictable conditions rather than perfect fundamentals or sentiments. In the 2021 year-end, a flat line in the Accumulation/ Distribution indicator can be seen because there is no volume figure available.

Since December 4 2021, there has been a sharp decline in the price of MediBloc. A slight recovery was observed in January 2022, but again there was a downfall in the price since then. Though, currently there can be seen a hope that the price might rise in the short term as minor increase is seen.

The above price chart of MediBloc shows how unpredictable cryptocurrencies or any other investment asset price can be and how the fluctuations in MediBloc price can make some people very rich, without a necessary perfect plan.

As per Wallet Investor’s MediBloc forecast, the coin’s long-term performance will be outstanding compared to the short-term. The price forecast for the year 2027 suggests that the minimum value will be near $0.226 at the beginning of the year.Wallet Investor

According to Price Prediction’s MediBloc forecast, the future of the MediBloc token looks bullish. As per the current price actions, MED has been showing strong potential. The MediBloc price forecast for the year 2023 suggests that the coin will have a minimum price of $0.078.Price Prediction

As per the Digital coin price, the MediBloc forecast suggests that the coin’s value will continue to increase. For the year 2025, it is expected that the coin price might reach $0.11.Digital Coin Price

As per Gov Capital’s MediBloc price forecast, the Medibloc price might reach $0.14423197 in one year.Gov Capital

To get more details on different cryptocurrency and their predictions in the coming years, experts opinions are very helpful. Similarly, the MediBloc price predictions below uses technical analysis and price predictions models using historical data to forecast the future value. That said, any sort of prediction is not a piece of investment advice or financial advice, and the future results may vary depending on the forecast system used.

Traders should use proper risk management and strategies with their own investment style to generate the most optimal results. Every investor or trader has their own trading style of investing and should adhere to the proper risk and portfolio management. The following are the MediBloc price predictions from 2022 to 2026 that will help you invest the right way.

Based on our forecast, it might be a good time for an investor to jump on board and buy MED coins since the coin is near its support levels. Technical analysis and short-term forecast suggest that the minimum price of MediBloc may be $0.0603, and the maximum price may be $0.0688. As per our predictions, the average MediBloc price is expected to be near the $0.0647 level.

Although the coin was stable for quite a long, our forecasts indicate that it won’t be the same anymore. If the current trend continues, the coin will give good returns. The average MediBloc price is predicted to be $0.0735 in 2023, with a minimum price of $0.0652 and a maximum price of $0.0805 as per our MED price prediction.

The long-term predictions for the coin look really bullish after analyzing its past performance with some prominent indicators. As per our prediction, MediBloc token’s minimum price and maximum price for the year 2025 are predicted to be around $0.0851 and $0.11, respectively, with an average MediBloc price of $0.0946 throughout the year.

Where can I buy MED coins?

You can trade the MediBloc digital coins on Gate.io and Bittrex. These are some of the exchanges that are quite popular in the crypto community because of the account setup and liquidity. The official website also recommends Upbit and Korbit for trading the MediBloc (MED) tokens though they are available only in South Korea. Our forecasts suggest that holding the coin will be profitable.

How many MediBloc tokens are in circulation?

MediBloc (MED) is relatively safe as the Panacea blockchain uses delegated proof of stake (DPoS) consensus mechanism and Practical Byzantine Fault Tolerant. The validators nodes are decided by votes of network participants to efficiently produce new blocks at high speed while syncing the blocks. In Panacea, when the validators successfully validate and produce blocks, they are rewarded with a MED coin as an incentive. The users with the MED mainnet coins can vote for validators and contribute to the block validation process to earn incentives after a new block is successfully created.

Is MED a good investment?

Yes, MediBloc is an excellent investment as per the forecast and predictions. You may buy MediBloc or sell MediBloc, but do your own research and don’t rely solely on other prediction or other forecasts for the short term. The coin will generate a good return and be a profitable investment in the long term. MediBloc still has a great road ahead, and the Korean market may just be the humble beginnings. The idea does hold good investment potential, but it has to grow and gain market acceptance. As of now, the company does not have a significant market presence globally. But it is expected to grow, and soon it might become mainstream. But till then, the asset itself should be considered risky for traders. Investors should use the proper risk management and hold long-term positions over the years.

What is MediBloc price prediction 2030?

As per our MediBloc price forecast 2030, the minimum price, maximum price, and average price of MediBloc are expected to be $0.22, $0.23, and $0.22 respectively. As per our forecasts, having a long-term investment in the token will definitely be a great idea in the long run.