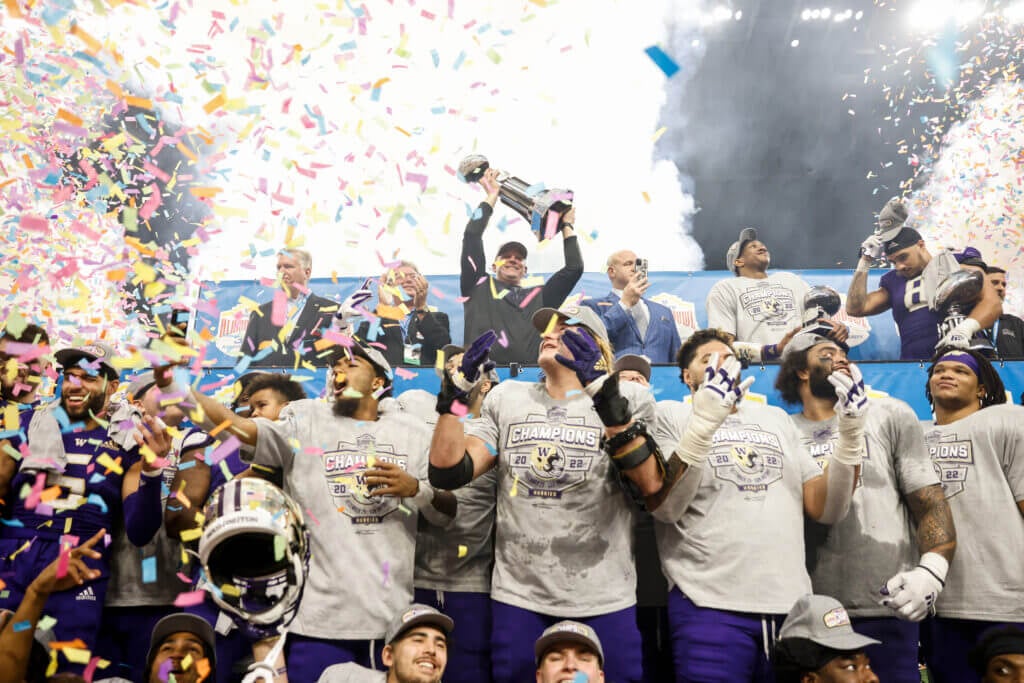 SAN ANTONIO — Put Jaxson Kirkland back in a cast, back in a hospital bed, back in early February, the most uncertain season of his life. The NFL Draft was off the table. Another year in college was the best he could do, and even then, it was no guarantee the NCAA would allow him back. His beloved Washington Huskies — his dad’s alma mater, the school he always wanted to play for — had finished a 4-8 season and fired their coach. The burly left guard, the UW legacy, was stuck in football purgatory. It couldn’t really end like that, could it?

Put Kirkland in a time machine. Show him Thursday night into Friday morning at the Alamodome. The fireworks. The confetti. The balloons. Rome Odunze standing atop the conductor’s ladder, leading the marching band as it plays “Tequila.” Michael Penix Jr. entertaining photo requests and hugging his family. Alex Cook toting a trophy around as if he were carrying a football. Kamren Fabiculanan wearing a cowboy hat. A postgame celebration that went on and on and on, so long, Kirkland would say, “They had to kick us off the field.” Take him back to the locker room and hand him a cigar and fill the lower concourse with the scent — stench? — of victory. Have him apologize: “It smells like a casino in there.”

Put Kalen DeBoer and Penix and Bralen Trice on a podium. Listen to DeBoer’s postgame speech.

“If you told me right now I’d be standing here 11-2, fifth team ever in UW history to do that, I’d think you’re crazy, based off all that’s happened in prior years with this program,” Kirkland said, for real, no fairy tale, outside Washington’s locker room, well after the Huskies had finished their 27-20 Alamo Bowl victory over No. 20 Texas. “Everything happens for a reason. All the pieces came together.

“We just came in with a chip on our shoulder this year. Everyone doubted us and we just had something to prove. Little did we know that would take us to 11-2. We were hoping to salvage a bowl game, but we just shot out like a cannon.”

Washington’s 2022 vengeance tour concluded with its most cathartic bowl victory in some time, with one of its former head coaches standing on the opposite sideline and with postgame revelry more fitting of a New Year’s Six or College Football Playoff win. But what the hell? The Huskies finished the season on a seven-game winning streak and beat another Top-25 team. They did it before a crowd of mostly burnt orange, a veritable road game despite the neutral venue. The failures of 2021 feel so long ago now that it’s easy to forget the depth of the ashes from which this most satisfying season arose, and the Huskies have not tired of celebrating each milestone on the way back up.

Michigan State. Oregon State. Oregon. Washington State. Add Texas to the mantle, even if the Longhorns were without their top two running backs and a star linebacker. The record book will show only that the Huskies won 11 games and lost two, a mark DeBoer dangled before his team as a motivational carrot throughout the past month. Kirkland knows his history: only four teams in UW history had won 11 games, in 1984, 1991, 2000 and 2016. It’s never happened for a first-year coach, and it’s certainly never happened after a four-win season.

“As soon as Coach let us know about that, we echoed it throughout the locker room,” Odunze said of the 11-win mark. “It was instilled in us and our passion and our fire, and we came out on that field knowing we want to mark our names in history and be legends among Huskies.”

Reggie Williams came to Washington as one of its most touted recruits ever. At his first training camp, he told his new teammates he was the best player there. He was right. In three seasons, Williams set the school’s career and single-season receiving records and became a top-10 NFL Draft pick.

On Thursday, he was a fan. And a dad. As a crowd formed around Penix for photos and autographs, Williams asked his youngest son if he’d remembered his Sharpie. Another of his three boys waited patiently for his turn to stand beside Washington’s star quarterback, the one who just broke the single-season school passing record set by Cody Pickett, Williams’ old teammate from 2001-03.

“Yeeeeeeaaahhhh Mike!” Williams pointed and yelled, excitable as ever.

Penix’s biggest fans were here, too — his mom Takisha and dad Mike Sr. and his younger brothers, Mekhi and Mishon. It wasn’t easy. They drove 16 hours from Florida, their Southwest flight among the thousands canceled in the past week.

“Nothing was stopping them from coming to see me play,” Penix said. “They’ve been supportive all throughout my life. Each and every chance I get, I tell them I love them, try to give them hugs and stuff.”

There were a lot of those on Thursday night. This wasn’t Penix’s sharpest performance, though he still was voted most outstanding offensive player. He threw an interception on Washington’s first possession but settled down to complete 32-of-54 passes for 287 yards and two touchdowns. His longest completion was his first, on the first play of the game, a 35-yard toss to Ja’Lynn Polk off a flea flicker.

The Huskies call the play “Frankenstein.” Offensive coordinator Ryan Grubb told Penix last night that he wanted to open with it but told his quarterback not to tell anyone until the call came in. Penix made it until the coin toss, when he told tailback Wayne Taulapapa, a fellow captain, what was coming.

The completion didn’t lead to points, but it did loosen Texas’ defense a bit, and that made it easier for Taulapapa to pick his way for 108 yards on 14 carries, including a 42-yard touchdown in the first quarter on a run-pass option. The give was indicative of Penix’s understanding of the offense and how to play the long game against an opposing defense.

Washington’s two second-half touchdown drives covered 165 yards, chewed more than 12 minutes of game time and required five third-down conversions and two fourth-down conversions. Taj Davis ended the first with a 6-yard touchdown catch, and Jalen McMillan snagged an 8-yard score nearly off the turf to cap the second, which gave the Huskies a 27-10 lead early in the fourth quarter. Texas fought back into it — and could have made things even more interesting if not for a pair of consecutive drops by star receiver Xavier Worthy, the second of which almost certainly would have been a touchdown — but Trice’s second sack of the game forced the Longhorns to run their final play from their own 10-yard line.

Texas gained more yards per play than the Huskies — 6.5 to 5.4 — but Washington ran 83 plays to Texas’ 65, and dominated the ball through the third quarter and into the fourth.

“Tonight was a combination, I think, of everything that we’ve worked on, the things that we’ve tried to improve, especially in the latter half of the season,” DeBoer said. “You saw our physicality, I think, take that next step. Finding a way to win is something we’ve really emphasized, and I told the guys last night — if it’s a close game, we’re going to find a way to win.”

DeBoer doesn’t want to think too much about next season. Not yet. He thinks it’s important for Washington to celebrate what it accomplished in 2022, especially for seniors such as Kirkland and Taulapapa who won’t be here for whatever the future holds.

But the spotlight goes where it goes, and you couldn’t watch Penix on the field afterward without wondering how brightly his star might burn before September arrives. He surprised everyone with his decision to return in 2023, and he is about to embark on an offseason of legitimate Heisman Trophy buzz. Even Texas fans wanted a moment with him after Thursday’s game, including a young fan who beamed as he posed for a photo, a Longhorns hat atop his head. Penix held his smile as he strategically palmed the youngster’s hat and turned it backward to obscure the logo.

Washington hasn’t had a single non-senior declare yet for the NFL Draft. That group includes both Penix and Trice, who notched two sacks Thursday to earn most outstanding defensive player honors. The lone undecided prospect is Odunze, who caught five passes for 57 yards to finish the season with 1,145 yards, fifth-most in school history.

“Y’all will know very soon,” he said outside UW’s locker room, as the clock lurched toward 1 a.m. CT.

Has he already made a decision?

“I’m leaning toward a certain way, for sure,” he said, “but I’m just waiting for the right time, talk it over with my family and make sure everybody’s straight with it.”

With or without him, Washington’s players make little effort to conceal their confidence about what next year could hold. They just finished a feel-good season, and they won more games than nearly any Huskies team before them. But they still watched the Pac-12 Championship Game from the couch, and Washington doesn’t hang banners for Alamo Bowl victories.

Thursday’s performance allowed the Huskies to create memories they will cherish forever. It also combines with their prior achievements to crank expectations higher than anyone could have envisioned for 2023, and that’s a reality this group could hardly embrace more strongly.

“We goin’ bigger,” Penix said during the trophy ceremony, his words drowned out by the purple mob celebrating below. “Y’all already know. We finna go for it all.”