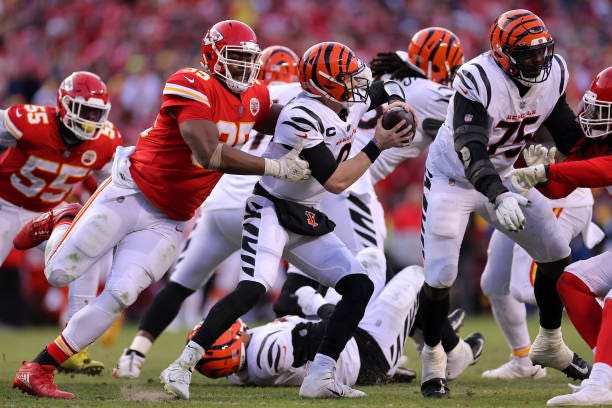 Note: Odds and lines are current from FanDuel Sportsbook at the time of writing and subject to change.

Is that déjà vu? Nope, it’s just the Cincinnati Bengals and Kansas City Chiefs back in the AFC Championship Game for the second year running.

Cincy and Kansas City are both pulling their weight in forming what is quickly becoming a modern rivalry. The Bengals won last year’s playoff bout, 27-24, in overtime and beat the Chiefs by the same score earlier this year in Week 13. However, the latter’s dominance over the league during the past half-decade cannot be overstated.

The winner of the impending heavyweight matchup will advance to play either the San Francisco 49ers or Philadelphia Eagles in the Super Bowl.

As we continue, we will carefully examine the betting markets and discuss what to expect on the field.

Kansas City was initially narrowly favored when the lines opened, but the odds have flipped to slightly lean Cincinnati, perhaps because of Patrick Mahomes’ ankle injury. Either way, this game is basically a coin flip.

The Chiefs have flown under the radar this year despite being the AFC’s No. 1 seed and producing a 14-3 record during the regular season. Their superiority to the rest of the NFL is almost expected at this point, so as long as they are not breaking records or writing Monday’s headlines, there isn’t much to talk about beyond the continued brilliance of Mahomes, who turned in another MVP-caliber season in 2022.

Unfortunately for Kansas City, Mahomes suffered a high-ankle sprain during the Chiefs’ win over the Jacksonville Jaguars in the Divisional Round. Mahomes left the game briefly during the second quarter but returned for the second half and has promised to suit up on Sunday, although it’s unclear if the issue will hamper him.

If there’s one man in the NFL who can go toe-to-toe with Mahomes, it’s Joe Burrow. Burrow is a perfect 3-0 against Mahomes in his career, with all three wins coming by exactly three points. He’s also been marvelous in the postseason, going 5-1 with a 3-0 record on the road, including last week’s 27-10 rout in Buffalo.

Both teams play similar offensive styles. They don’t want to abandon the run but won’t hesitate to turn the game over entirely to their strong-armed quarterbacks, who can produce magic when needed. Cincy has the better weapons, but Kansas City has the healthier offensive line and more experienced QB.

The Chiefs are healthy nearly across the board and have standout defensive talent in defensive tackle Chris Jones. However, they also heavily feature five rookies, leaving them prone to the occasional youthful gaffe.

This game could easily come down to which team possesses the ball last. We trust Kansas City head coach Andy Reid more than Cincinnati head coach Zac Taylor, but Taylor may have found Reid’s kryptonite.

We expect the final result to be extremely close, but we predict the Bengals will emerge victorious. The Chiefs’ aura of invincibility is not there like it has been in years past, especially with Mahomes’ injury, and Cincy has a supreme swagger about them that starts with their quarterback.

Even though the spread is tiny and does not cross any critical numbers, bettors could safeguard against a last-second score by taking the Bengals on the spread. However, we believe the Cincy moneyline is the most playable line.

The over/under could swing either way. Both offenses run white-hot, but the playoff pressure and cold weather could lead to the game going surprisingly low, as we saw in the Bengals’ game last weekend.

With Mahomes, Burrow and a few of the other best players in the league ready to suit up on Sunday, football fans are sure to get one of the most exciting matchups of the year. Here are our favorite picks for players who will stand out on the field and in prop betting markets.

While Cincinnati’s run defense has been terrific lately, Mahomes is on a bum ankle, which should open up more opportunities for Pacheco. He has also gone over 50 rushing yards in nine of his last 10 games and racked up 95 yards on only 12 carries last week.

In three career games against Kansas City, Burrow has averaged 327.3 passing yards per game. If there is anything we know about this young phenom, it’s that he shows up when the money’s on the table. Expect him to come out throwing early and often and light up the box score in the process.

Creating a parlay with FanDuel is easy. Bettors pick a few of their favorite game lines, combine them into one large bet (known as a parlay) and submit when they are ready.

Parlays require bettors to take on greater risk as every leg must come true for the parlay to cash, but if it does, the payout is much greater than it would be if any of the legs were standalone bets.

We have created a four-leg same-game parlay with +1170 odds, which would pay out a $1,170 profit along with your original stake back on a winning $100 bet. Here’s how the parlay looks:

The first leg is for Mahomes to throw for at least 225 passing yards. Even with a blown tire, he is surgical enough to go over this total, just like he would’ve last week had he not been forced out of the game.

The second leg is Kelce as an anytime scorer. He just set the record for most receptions (14) in a postseason game, is third all-time in postseason receiving TDs and is the only real receiving threat on Kansas City, not to mention Mahomes’ favorite target (especially in the red zone).

The third leg is Cincy’s tight end, Hayden Hurst, to also find his way into the end zone. The Chiefs gave up the fifth-most touchdowns to opposing tight ends this year, and Hurst has drawn six targets in each of his last two games. That’s enough volume, especially near the goal line, to cash this leg at positive odds.

The final leg is the Bengals +7.5. We think they will win, but we are still getting value while adding a full touchdown’s worth of insurance in case they fall short.