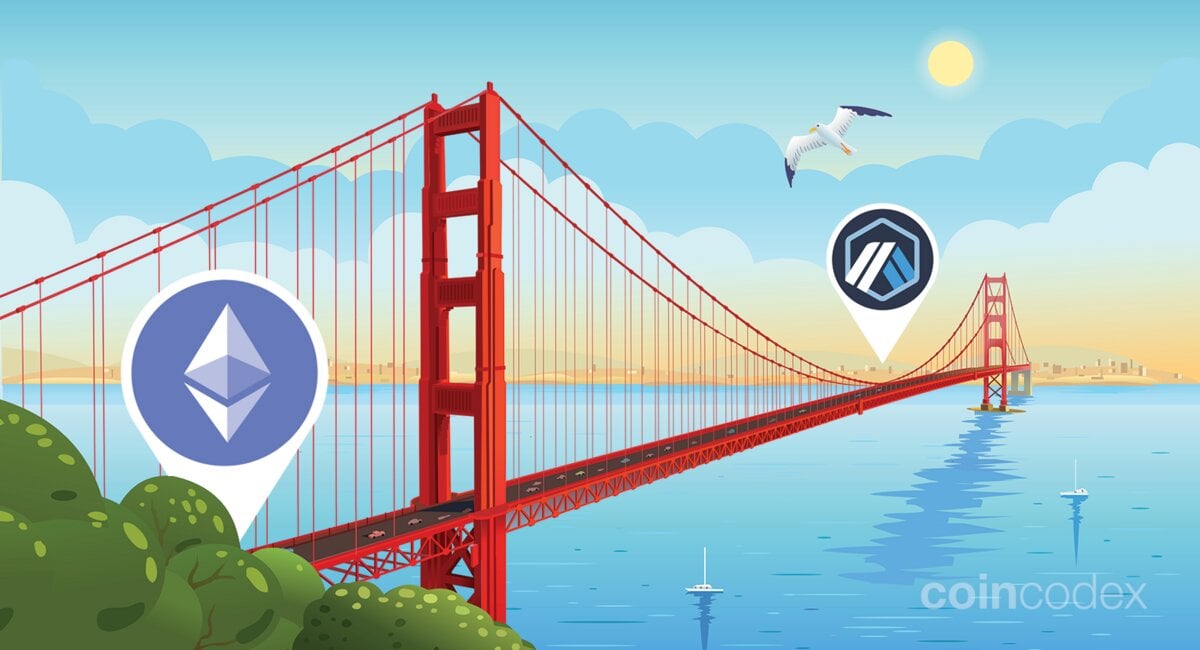 As we move further towards a multi-chain ecosystem, bridging tokens between different blockchain platforms is becoming an increasingly common task. One of the platforms you’re most likely going to be bridging to is Arbitrum, a layer 2 that functions on top of Ethereum. The reason why you’ll likely want to bridge your crypto to Arbitrum is because the platform offers much lower fees and faster transactions.

Before we get started with bridging ETH to Arbitrum, let’s do a quick refresher on what Arbitrum actually is.

Arbitrum is a layer 2 platform providing a faster and cheaper alternative to Ethereum. Transactions made on Arbitrum are executed off-chain for better performance, but get posted on the Ethereum blockchain in the form of rollups. More specifically, the scaling technique underpinning Arbitrum is called optimistic rollups.

The Arbitrum mainnet was launched in September 2021, and is currently going through a gradual launch. The Arbitrum platform is not yet fully decentralized, as it relies on a permissioned set of validators at the moment. The plan is to gradually decentralize Arbitrum over time if the platform proves itself to be reliable and working as expected.

The Arbitrum project is being developed by a company called Offchain Labs. The two main products they are working on are Arbitrum One and Arbitrum Nova. To avoid any confusion, we should note that the layer 2 platform that we are referring to throughout this article is technically called Arbitrum One. However, we’ll just be calling it “Arbitrum”, as that’s how it’s broadly referred to in the crypto community.

Why would you want to bridge to Arbitrum?

The main reason to use Arbitrum is to benefit from faster transactions and lower fees compared to the Ethereum mainnet. Arbitrum is fully compatible with the EVM (Ethereum Virtual Machine), which means that any smart contract that can be deployed on Ethereum can also be deployed on Arbitrum.

The number of unique addresses on Arbitrum has been growing rapidly. Image source: Arbiscan

So, if you plan to do a lot of ETH transactions or make multiple token swaps, Arbitrum is definitely worth considering. The decentralized application ecosystem on Arbitrum is quite impressive as well, as you can find popular protocols such as Uniswap, Aave, 1inch, Curve and many others on Arbitrum.

There’s also some decentralized applications that are available on Arbitrum, but not the Ethereum mainnet. One such example is GMX, a popular decentralized derivatives exchange.

A less obvious reason why you would want to use Arbitrum is the possibility of a future Arbitrum airdrop. The Arbitrum platform doesn’t have its own token, which is why many members of the crypto community are speculating that an Arbitrum token might be launched in the future.

If an Arbitrum token launch does happen in the future, there’s a decent chance that it would be distributed through a “retroactive airdrop”, where a snapshot of past transactions on Arbitrum would be used to distribute tokens to users.

So, if you use the Arbitrum platform today, there’s a chance that you could get free tokens in the future if there is an Arbitrum airdrop. Please keep in mind that this scenario is purely speculative, as the Arbitrum project hasn’t actually announced any plans to launch an Arbitrum token.

How to move ETH from Ethereum to Arbitrum

Now, we’ll show you how to move ETH from Ethereum to Arbitrum using the Arbitrum bridge.

Before you can get started with using Arbitrum, you should set up your cryptocurrency wallet to support the Arbitrum network. We recommend using MetaMask, as it provides a convenient way to store your crypto in a non-custodial manner. Adding Arbitrum to MetaMask is easy, and we’ll show you exactly how to do it.

As you can see, all the necessary information is already filled in. After clicking “Approve”, you will be prompted to switch the current network your MetaMask is connected to from Ethereum to Arbitrum. You can of course switch your MetaMask back to Ethereum any time you like.

You can also connect MetaMask to Arbitrum manually

Here are the details you need to connect your MetaMask to Arbitrum:

Once your MetaMask is set up to use the Arbitrum network, you’re ready to bridge ETH from the Ethereum mainnet to Arbitrum.

Note: Moving ETH from Ethereum to Arbitrum is fast. However, ETH withdrawals from Arbitrum back to the Ethereum network take approximately 7 days to finalize. Please keep this in mind any time you’re bridging funds.

Head over to the Arbitrum bridge at https://bridge.arbitrum.io/.

Make sure that the “From” network is “Mainnet” and the “To” network is “Arbitrum One”. Input the amount of ETH that you want to bridge over to Arbitrum. Make sure to consider the gas fee ($2.13 in our example) before approving the transaction.

If everything looks good to go, click “Move funds to Arbitrum One”.

Your MetaMask wallet will pop up with the details of the transaction. If everything checks out, press “Confirm” to continue.

After clicking “Confirm”, the Arbitrum bridge website will notify you that the bridging transaction is currently taking place, and will provide you with an estimate of how long it will take.

Once the bridging is complete, you’ll be able to use Arbitrum-based decentralized applications with the ETH that you just transferred over. You can use the Arbiscan block explorer to view transactions on the Arbitrum network.

You can also get ETH to Arbitrum through centralized crypto exchanges

Above, we showed you how to get funds to Arbitrum using your own wallet. However, there’s also an alternative method available. Some centralized exchanges have added support for the Arbitrum network, allowing users to withdraw funds from the exchange directly to Arbitrum.

Some examples of exchanges that support withdrawals to Arbitrum include:

If you have ETH on any of these exchanges, you can withdraw it directly to Arbitrum if you wish to do so. Of course, you will also need to set up a wallet for the Arbitrum network beforehand in order to receive the funds and actually use Arbitrum.

If you’re interested in learning more about Arbitrum and the chances of an Arbitrum token being released in the future, check out our article that will tell you everything you need to know about the potential Arbitrum airdrop.